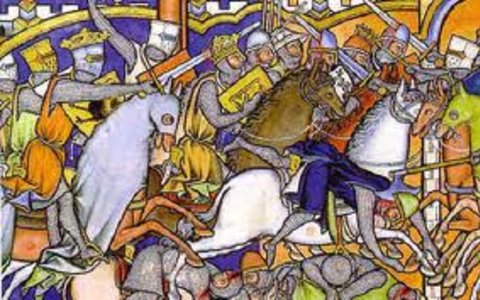 The Battle on the Litani has not received much attention in the history of the crusader states. It is often completely ignored or acknowledged with no more than a passing mention. While it is true that this battle was only one in a series of indecisive engagements between Salah ad-Din and the forces of the Kingdom of Jerusalem in the decade before the disaster at Hattin in July 1187, it was a sad precursor of things to come and is not entirely uninteresting.

The battle was allegedly provoked by Saracen “raiding,” of cattle and crops in the lordships of Beirut and Sidon. However, it seems highly unlikely that the King of Jerusalem would personally respond to mere raiding, particularly if it was conducted by Bedouins as some accounts suggest. Certainly, accounts of the engagement make clear that both Farukh Shah, a nephew of Salah ad-Din, and the Sultan himself were on hand with large cavalry, but notably no infantry, forces. This smells far more like a “reconnaissance in force” similar to the raid of 1187 that led to the disaster at the Springs of Cresson.

In any case, King Baldwin IV, now aged 18, responded by mustering a powerful cavalry force of his own. This included not only his most important baron, Raymond, Count of Tripoli, as well as Baldwin, Lord of Ramla and Mirabel, but also the Templars under their Grand Master, Odo de St. Amand. As W. B. Bartlett astutely points out in his Downfall of the Crusader Kingdom, this composition of forces underlines the fact that the Kingdom was not divided at this time; the Templars and Tripoli fought together without suspicion or recriminations.

While the exact sequence of events is not clear, it appears that the King and his forces succeeded in surprising and routing the forces of Farukh Shah. They drove the bulk of his cavalry back across the Litani and may have temporarily taken Farukh Shah himself captive.  Meanwhile, however, the Templars had separately encountered the larger, main force under Sultan Salah ad-Din. William of Tyre, who was not in the Kingdom at the time and based his account on reports of others, blamed the Templars for attacking this larger force injudiciously.  While that is possible, it should also be remembered that Tyre was a consistent critic of the Templars and inclined to think poorly of them regardless, while other participants may have been only too ready to pin the blame on someone other than themselves.

What is clear is that the Templars broke and fled back toward the main feudal army around the King. At this point in time, however, the feudal army was already scattered across the valley floor “mopping up” after their successful action against Farukh Shah. They were in no position to form a cohesive force. Salah ad-Din’s cavalry, hot on the heels of the Templars, fell upon the dispersed Christian forces, killing and capturing large numbers of Christian knights and nobles, including Baldwin Baron of Ramla and Mirabel, Hugh of Tiberius (stepson of the Count of Tripoli), and, according to Arab sources, some 270 knights and nobles altogether.

The King’s household, however, rallied around him and extricated him from the field with help and reinforcements from Reginald of Sidon. This was, of course, vital, as his capture would have had even more serious consequences than the other losses incurred. But his escape is notable for another reason as well: Baldwin was unhorsed during the — evidently heated — engagement, but his leprosy had by this stage advanced so far that he no longer had the use of his hand and arms and was unable to remount. The King had to be carried off the field on the back of a Frankish knight.

Just two months earlier, in another skirmish with Saracen cavalry, King Baldwin’s horse had bolted and, without the use of his hands, he had been unable to regain control. Now, because he was unable to remount with thrown, he had come within a hair’s breadth of capture. The eighteen-year-old king, who just two years earlier had led his chivalry to a stunning victory over Salah ad-Din at Montgisard, was now forced to face the fact that he could no longer command his armies from horseback. In a society in which the mounted warrior, the knight, was the incarnation of manly virtue and prowess, it must have broken Baldwin’s heart.  Not that he surrendered to his disability entirely: in the future he would lead his armies from a litter.

Meanwhile, the sorry outcome of this obscure engagement had two additional detrimental consequences for the Kingdom of Jerusalem.  First, among the captives was the Templar Grand Master, Odo St. Amand. Whether he was to blame for an unnecessary defeat, as William of Tyre suggests, or not, he had the courage and honor (as his successor Gerard de Rideford did not ) to  refuse ransom in accordance with the Templar Rule. He died miserably in a Saracen dungeon — thereby paving the way, indirectly, for the election of the disastrous and unscrupulous Gerard de Rideford.

Equally wide-reaching in its effect was the capture of Baldwin, Baron of Ramla and Mirabel. Baldwin (often referred to as Baldwin of Ibelin because he was the son of the First Baron of Ibelin and older brother of Balian d’Ibelin, the founder of the Ibelin dynasty) was considered such a valuable prisoner that Salah ad-Din set his ransom higher than the ransom once asked for King Baldwin II of Jerusalem; in short, the Saracen Sultan demanded “a king’s ransom” for a baron whose feudal holding were only two thirds of that of the upper tier of barons (Tripoli, Caesarea, Sidon, Galilee, Jaffa-Ascalon).  This is not logical — unless the Sultan had some reason to believe that Ramla was destined to become a king. According to the chronicler Ernoul, who had close ties to the Ibelin family and so can be considered an “insider” — albeit a biased insider, Princess Sibylla of Jerusalem had at this time promised to marry Ramla. Such a marriage would have made Ramla the effective heir to the throne, and Salah ad-Din would have had every reason to both demand the high ransom and hope that the cost of paying it would discredit Ramla to his future subjects. Curiously, the ransom was paid not by the treasury of Jerusalem but by the Byzantine Emperor instead, suggesting that the latter too had reason to expect Ramla to become King of Jerusalem. Both Salah ad-Din and Emperor Manuel I appear to have been misinformed. That, or — as Ernoul suggests — Princess Sibylla changed her mind after Ramla was captured.

In the latter case, Ramla’s capture can be seen as a contributing factor in Sibylla transferring her affections to the young, recently arrived French adventurer Guy de Lusignan. The consequences of her infatuation and life-long love for Lusignan can be read here.

The Battle on the Litani is described in detail in Book II of my three-part biographical novel of Balian d’Ibelin, Defender of Jerusalem

The Battle on the Litani