Baldwin of Ramla and Mirabel: 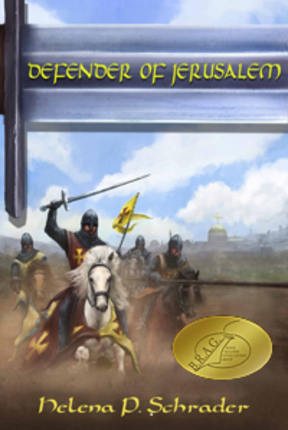 Although Balian d’Ibelin is better known today, his elder brother Baldwin was arguably the more colorful and (initially at least) more important character during their lifetime. He reached for a crown but ended up renouncing all his honors and titles. He abandoned his wife and children to disappear from the pages of history, yet the daughter of the wife he divorced became a queen and founder of a dynasty that lasted more than 300 years.

So who and what sort of man was Baldwin, Third Baron of Ibelin?

As with all the early Ibelins, we don’t know the date of his birth, only that it was after his father received the lordship of Ibelin and married Helvis of Ramla in the mid-1140s. Baldwin d’Ibelin himself married Richildis, the sister of a local baron (but not an heiress), in 1156, but this still gives us little indication of his age since marriage alliances were often made when both parties were still children. Certainly, Baldwin inherited the paternal estate of Ibelin when his elder brother Hugh died childless in or about 1171. He also inherited the maternal estate of the dual barony of Ramla and Mirabel at this time, if not before. Thus by 1172, when he was probably in his mid-twenties, Baldwin of Ramla (as he was best known to his contemporaries) held the three baronies of Ibelin, Ramla and Mirabel.  This made Baldwin of Ramla an important baron in the Kingdom of Jerusalem, albeit in the second tier.

He was second tier because all three of his baronies were fiefs of the County of Jaffa and Ascalon, making him a “rear baron” or vassal of a vassal rather than a crown vassal. However, at the time Baldwin assumed control of his lands, the Count of Jaffa and Ascalon had become King of Jerusalem, holding the County and Kingdom in personal union. This meant that Baldwin was de facto, but not de jure, a vassal of the crown. He owed 50 knights to the army of Jerusalem, a number that is respectable but only half of what Galilee, Sidon or Caesarea owed.

Baldwin first emerges as someone of note at the Battle of Montgisard, fought only a few miles from Ramla and Ibelin both. According to contemporary sources, he and his younger brother Balian played an important role in this decisive victory over Salah ad-Din and the near complete destruction of the Saracen army.

Shortly afterwards, his younger brother Balian married the Dowager Queen of Jerusalem, Maria Comnena, and at about this time Baldwin bestowed the smallest of his baronies (Ibelin) on him. The move would appear to have been motivated by the need to make the younger Ibelin a more suitable match for the wealthy, royal widow. How willingly Baldwin gave up his paternal inheritance is not known, but as the alliance was very much in the interests of the Ibelin family as a whole, Baldwin may not have needed much persuasion.

What is clear is that Baldwin’s ambitions were increasing. Inspired (or provoked) by his brother’s brilliant match, Baldwin set aside the mother of his two daughters to make way for a more favorable marriage. He took wife a widowed heiress, Elizabeth Gotman, but she died in 1179. This freed Baldwin to look even higher. By this time king’s eldest sister, Sibylla, was a young widow with an infant son. She was also the heir apparent to the throne of Jerusalem. While the High Court of Jerusalem sent to France for a suitable husband, Baldwin courted Princess Sibylla directly.

According to the contemporary chronicle written by “Ernoul,” a client of the Ibelin family, Princess Sibylla was not disinclined to his suit. Unfortunately for Baldwin, however, he had the misfortune to be taken captive by the Saracens in the Battle on the Litani in June 1179. The fact that he was seen as a prospective King of Jerusalem is suggested by the outrageous ransom Salah ad-Din demanded for his release: 200,000 gold bezants, or more than had been paid for a crowned and ruling king (Baldwin II) in 1123. There is no way the prosperous but relatively small baronies of Ramla and Mirabel could have raised this enormous sum; Salah ad-Din clearly assumed that the entire kingdom would raise Ramla's ransom, as was customary for a captive king.

The most convincing evidence for Baldwin’s aspirations to throne of Jerusalem via a marriage with Sibylla, however, is provided by the most reliable of all contemporary sources, William Archbishop of Tyre. The Archbishop was at this time the chancellor of the kingdom and so a veritable “insider” without any bias in favor of the Ibelins. He records that shortly before Easter 1180 King Baldwin received news that Baldwin of Ramla was approaching Jerusalem in company with the Prince of Antioch and the Count of Tripoli, all accompanied by large retinues.  According to Tyre, the King (who was suffering from leprosy) feared that the two men ruling the other crusader states (the Principality of Antioch and the County of Tripoli) had come to depose him by raising up Baldwin of Ramla in his place via a marriage to his sister Sibylla. As I have pointed out elsewhere, I find it unlikely that Tripoli was intent upon a coup d’etat at this point, but the fact that Tyre mentions the possibility of a marriage between Sibylla and Baldwin of Ramla makes clear that rumors to this effect were in circulation.

Ramla’s hopes were dashed by Sibylla’s hasty marriage to an adventurer from the west, Guy de Lusignan. Whether she had been seduced by Lusignan or forced into a hasty and demeaning marriage by her frightened brother is unimportant. Ramla’s hopes of gaining a crown through marriage to the heir were for the time being crushed. Ramla had every reason to be disappointed (not to say outraged) by these developments, particularly because Guy was in no way his equal in terms of status or experience. (Guy was a landless younger son and as a newcomer to the Holy Land with absolutely no experience fighting the Saracens.) Ramla’s feelings would have been further complicated by the fact that Guy was the younger brother of his own son-in-law! Baldwin’s eldest daughter Eschiva had been married sometime prior to 1180 to Aimery de Lusignan. To add insult to injury, King Baldwin IV raised Baldwin's new brother-in-law Guy to Count of Jaffa and Ascalon (to make him worthy of Princess Sibylla). That effectively demoted Baldwin from tenant-in-chief to “rear vassal” — a man holding a fief from a tenant-in-chief rather than the crown directly.

There can be little doubt that this rankled and, indeed, embittered the proud Baldwin of Ramla, but it did not make him a rebel. He dutifully mustered with his knights when called upon to do so by King Baldwin IV on at least of three occasions between 1180 and Baldwin’s death in 1185. Indeed, he played a prominent role (with his brother Balian) in defeating the Saracen forces attempting to take the springs at Tubanie in 1183.  Notably, this action at the springs of Tubanie were in support of his son-in-law, the elder brother of his hated rival Guy de Lusignan, suggesting that Ramla may have retained good relations with his son-in-law despite his hostility of Guy. In any case, as long as King Baldwin IV was king, Ramla appears to have accepted his fate, even marrying again, this time Maria of Beirut.

Baldwin IV was succeeded by his nephew, Sibylla’s son by her first marriage, who ruled as Baldwin V. Since he was still a child of eight when he came to the throne, however, the welfare of the kingdom was placed in the hands of a regent, the Count of Tripoli. As we have seen, Baldwin was on good terms with Tripoli, and showed no signs of rebelliousness. The elevation of his hated rival, Guy de Lusignan, to King of Jerusalem in a coup d’etat, a year later, on the other hand, proved to be too much.

I have described the constitutional crisis of 1186 elsewhere and will not go into the details here. Significant for this article is that two barons initially refused to do homage to Guy on the grounds that he was not legally king.  Tripoli withdrew to his own lands and made a separate peace with Salah ad-Din (which he later abrogated before eventually doing homage).  Ramla took the even more dramatic and unusual step of renouncing all his lands and titles in favor of his infant son!

According to Ernoul, he did this is a public confrontation at Acre before the whole High Court. In whatever form, it was a dramatic and unprecedented act. Peter Edbury, author of a detailed biography of Baldwin’s great nephew, (John of Ibelin and the Kingdom of Jerusalem, Boydell Press, 1997) notes: “It was an extraordinary thing to do. It meant giving up his inheritance, jeopardizing the future of his heirs and abdicating the political and social standing that he, the senior member of his family, and his father and elder brother before him had nurtured for the past three quarters of a century.” (p. 12.)

A man who took such a dramatic step was clearly a man of strong emotions. His hatred and resentment of Guy de Lusignan must have been enormous. More baffling, however, is that his outraged pride was more important to him than the substance of power and wealth. Equally notable, if less obvious is that he was a singularly callous husband and father.  He’d discarded the mother of his two daughters for no better reason than a better marriage, and now he abandoned his latest wife and only son to the dubious mercy of Guy de Lusignan. To be sure, he claimed he was leaving his wife and son in the care of his younger brother Balian, but this was legally dubious. A vassal who refuses homage usually forfeits his fief to his overlord, in this case to none other than Guy de Lusignan as both Count of Jaffa and King of Jerusalem. It is a forgotten measure of Lusignan’s chivalry (or appreciation of his very precarious situation) that he took no action to seize Ramla and Mirabel from Balian d’Ibelin, but rather allowed him to control both until Hattin obliterated all the baronies of the kingdom.

Ironically, it was the daughter of Baldwin’s discarded wife Richildis who was to wear a crown. Seven years after Baldwin had abandoned a wife for the second time and disappeared from history, Baldwin’s son-in-law, Aimery de Lusginan, became Lord of Cyprus. Aimery then offered to place Cyprus under the Holy Roman Empire in exchange for a crown. Roughly eight years after Baldwin of Ramla had turned his back on the Kingdom of Jerusalem, his daughter Eschiva became Queen of Cyprus. For the next three hundred years, the Latin Kingdom of Cyprus was ruled by her descendants.

Baldwin of Ramla is a prominent character in the first two books of my Balian d'Ibelin series: 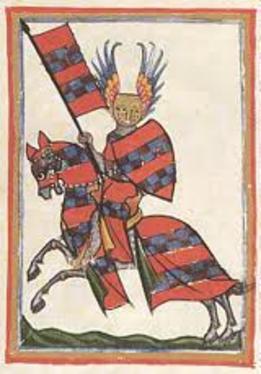 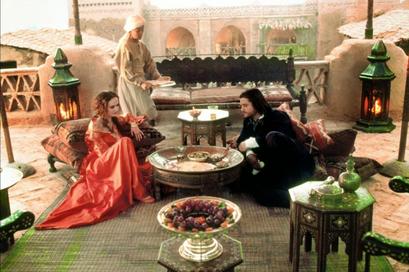 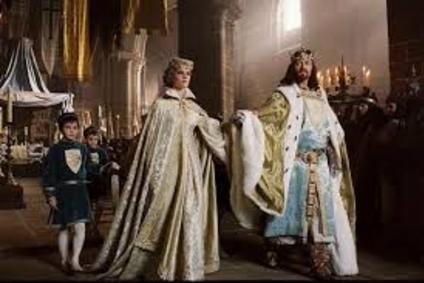 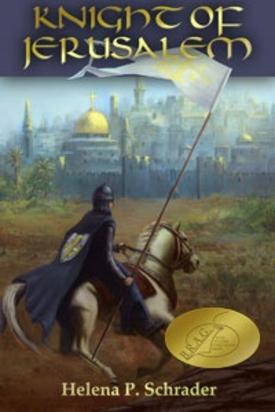