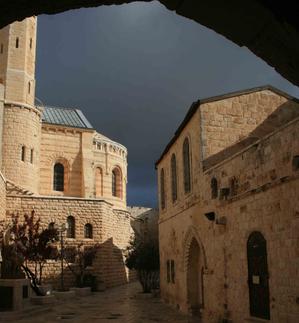 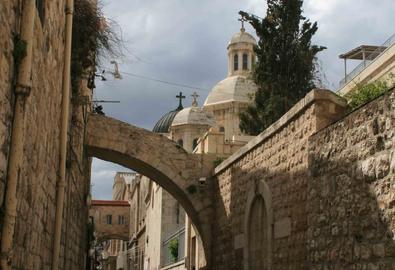 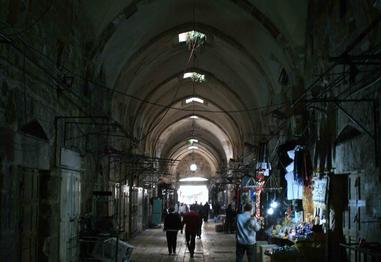 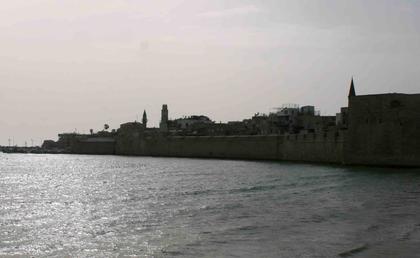 Many of the covered markets of Jerusalem date back to the crusader period.

Acre today; Acre was one of the most important crusader ports.

A merchant ship of the crusader period. 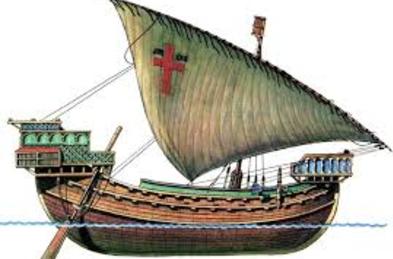 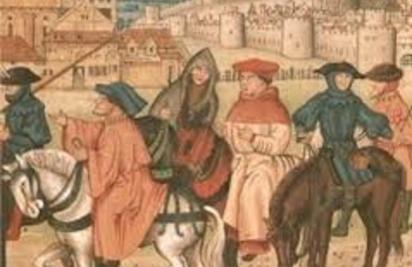 The establishment of the crusader states along the coast of the Levant resulted in an economic revival of the region as pilgrims, merchants and settlers flooded into the territories re-captured for Christianity.  What had been an unimportant backwater to the Ayyubid and Fatamid caliphates, whose religious, administrative and economic centers lay in Damascus and Cairo respectively, had suddenly become the spiritual heart of the Latin-Christian world.  In consequence, not only did existing cities undergo an economic boom, but ancient cities gone to ruin such as Caesarea and Ramla were revived, and entire new towns and villages were built.

An estimated 140,000 settlers from Western Europe immigrated to the Holy Land in the first century after the First Crusade, eventually accounting for between twenty and twenty-five percent of the population of the crusader states. These numbers were swelled annually during the “sailing season,” roughly from April to October, with tens of thousands of pilgrims who came to see the holy sites as “tourists.” To serve the pilgrims, the mercantile city-states of Venice, Genoa and Pisa built fleets and established communities in the ports of the crusader states to cater to residents, pilgrims and home markets. In addition to passengers, the Italian merchant fleets transported a variety of goods such as timber, horses, arms and armor from the West and sugar, olive oil, silk, and spices from the east.

It has been estimated that roughly 50% of the Frankish population in the crusader kingdoms was urban. That represents a much higher proportion than in Western Europe at this time, and particularly in the post-Hattin era, the majority of noblemen were dependent on non-agricultural income for their wealth. In short, the degree of urbanization in the Kingdom of Jerusalem, particularly the 13th century Kingdom, resembled the Italian city states more than the large western kingdoms such as England and France. To understand the crusader kingdoms, therefore, it is important to understand the urban economy.

The most obvious source of wealth was the control of the key ports along the coast of the Levant which meant the points at which the “riches of the Orient” were transshipped for export to the increasingly prosperous population of the West. It was in Beirut and Tyre, Acre and Caesarea, Jaffa and Ascalon that Damascus steel and Indian spices, Ethiopian incense and Nubian gold, Persian carpets and Chinese silk, African ivory and Egyptian papyrus were exported to the hungry markets of Italy, and from there onward to the Holy Roman Empire, France, Iberia and far off England and Scandinavia.

In addition to these transshipped items, the crusader kingdoms themselves had a number of export goods that were highly lucrative. While sugar was probably the most important bulk commodity, the export of Holy Relics and souvenirs should not be under-estimated. By some estimates, the population of Jerusalem doubled during the summer pilgrimage (tourist) season, and all of those pilgrims wanted to take some mementos home with them as well as gifts for family and friends, just like modern tourists today. This created a market for the producers and sellers of everything from soap and perfume to jewelry, glass and silver tableware, carpets and other textiles, and books.

All those pilgrims also needed a place to stay and food to eat — and not just in Jerusalem. (Although there was a "Street of Evil Cooking" in Jerusalem that provided the Medieval equivalent of fast-food to the tourists!) The pilgrimage sites included not just obvious sites such as Bethlehem and Nazareth, but also the site of every moment in Christ’s life as recorded in the Gospels, and places associated with the Virgin Mary, Mary Magdalene, and other saints. There was hardly a place in the entire Kingdom of Jerusalem that could not lay claim to some biblical event of importance, and devout pilgrims, who ventured to the Holy Land at such cost and risk, generally stayed until the fall sailing season, which meant spending roughly six months in the Holy Land. In short, the pilgrimage “service industry” was arguably as important as tourism is to Israel today.

Last but not least, a large proportion of the Latin settlers were skilled craftsmen. Serfs could not legally leave their villages and lands (and most probably didn’t want to), so the pilgrims, whether armed and unarmed, were predominantly men of higher status: craftsmen, guildsmen, or merchants. They brought their skills with them, and many subsequently established themselves in the cities and towns of the crusader kingdoms, where they worked side-by-side with native craftsmen. Here some of the most productive if more prosaic of inter-cultural exchanges took place in the development of such things as dying and cloth-making techniques, leatherworking, gold and silver workmanship, pottery, carpentry, masonry, glass-working, and all the countless other skills essential to survival and a high standard of living at that time.

Based on the names of the streets alone, it is clear, for example, that Jerusalem had a high concentration of furriers and tanners, but also gold and silver smiths. Pottery from the region, glazed on the inside, is known to have been a particularly popular practical ware, (an early version of Teflon), and that glass-makers and glass-blowers were renowned. The massive construction projects undertaken primarily in the mid-12th century, ensured work for carpenters, masons and sculptors, and the remaining fragments of their work are testimony to the high quality of their workmanship.

At the high-end, Jerusalem also exported illustrated manuscripts from a scriptorium established by the Canons of the Holy Sepulcher. Books produced in such a sacred place had an added value beyond the high quality of the work, and undoubtedly represented one of the luxury goods with the highest margins exported from the crusader kingdoms — albeit, as with all truly valuable, custom made objects, only in very small quantities.

The crusader kingdom of Jerusalem, far from being a wasteland inhabited by barbarians, was a highly cultured, economically dynamic powerhouse.

Luxury Exports and Religious Tourists: The Urban Economy of the Crusader Kingdoms