The Teutonic Knights were founded much later than the Templars or Hospitallers and won their greatest fame and fortune fighting, conquering and ruling in northeastern Europe rather than the Holy Land. However, they had their roots in the siege of Acre, and throughout the 13th century, they played a very important role in the history of the crusader states. What follows is a part I of a short history of their role in the Latin East.

The Teutonic Knights evolved out of a “fraternity” of German crusaders who took part in the siege of Acre during the Third Crusade.  These crusaders, predominantly from the free Hansa cities of Bremen and Luebeck, established a hospital to care for the sick in the siege camp. The Hospitallers were, of course, present at the siege, so the need for an additional hospital appears to have been driven by the fact that many German crusaders were not comfortable speaking Latin or French, the languages of the Hospital. They preferred entrusting themselves to the care of men who spoke German.

The German Hospital (as it was called at that time) soon acquired such a good reputation that the son of Emperor Frederick Barbarossa, the Duke of Swabia, leading the remnants of his father’s crusade, chose to be treated there when he became deathly ill during the siege of Acre.  He also wrote to his brother, the Holy Roman Emperor Henry VI, requesting that he petition the papacy to recognize the German Hospital as a religious order.  He then requested that the German Hospital assume responsibility for his burial.

The problem with that was that the fraternity running the German Hospital was not yet composed of monks, so the Hospitallers challenged their right to conduct a burial. Feeling threatened by the Hospitallers, the Germans turned to the Knights Templar for protection. The Templars took the German brothers under their wing, granting them the right to wear the white habit of the Templars, but with a black half-cross (rather than the red Templar cross) inside a circle. What is more, a Templar, a certain Henry Walpot, was appointed the first “Master.”

Meanwhile, back in the West, the pope granted the emperor’s request to recognize the German Hospital as a religious order and told them to adopt the Rule of the Hospitallers. For the next eight years, the German Hospital, which had been granted land inside the re-captured city of Acre by King Guy de Lusignan, remained a hospital.  Its reputation with German pilgrims was high. Whether they died in the Holy Land or returned home, many German pilgrims bequeathed wealth and land to the German Hospital.

In 1198 a large contingent of German knights raised by Emperor Henry VI arrived in Acre as the spearhead of a new crusade. The death of the Emperor led to the premature dissolution of this crusade, but a few of knights chose to remain in the Holy Land.  They wished to continue fighting for the recovery of the holy sites and pleaded for the militarization of the German Hospital. This was granted, and the Templar Rule was adopted for the fighting elements.

The new character of the Order, now known as the Teutonic (German) Order (Deutscher Orden or sometimes Deutscher Ritter-Orden) did not lead to an explosion in manpower.  On the contrary, in 1210, at the time the next master was elected, the Order is described as being able to muster only ten knights. One is reminded of the Templars whose strength was initially just nine nights.

The new master, however, was a certain Herman von Salza, the son of a Thuringian family in the service of the Holy Roman Emperor, who is believed to have gone to the Holy Land in the entourage of the Count of Thuringia.  Herman proved to be a man of exceptional ability, particularly as a diplomat, and he was able to vastly increase the wealth, prestige and influence of the fledgling order.

Presumably, they could get away with this because they already enjoyed the patronage of the Holy Roman Emperor, Fredrick II Hohenstaufen. By 1217, Frederick was allowing the Teutonic Knights to draw income from his own revenues to pay for their (illegal) white mantles. The Hohenstaufen support for the Teutonic Knights went back, of course to the Duke of Swabia, but Fredrick II had his own reason to favor them: he was employing Salza as his envoy to the German princes in efforts to drum up support for the latest crusade and ― more importantly ― as his spokesman for his excuses to the pope for his own absence from that crusade.

The Teutonic Knights, few in number though they were, took part in the Fifth Crusade, and this proved to be decisive in their fortunes. The Fifth Crusade was a debacle. After the crusaders captured the Egyptian city of Damietta, the Sultan of Egypt al-Kamil offered to restore Jerusalem and the entire Muslim-occupied lands of the Kingdom of Jerusalem in exchange for the return of Damietta to Egypt. The leadership of the crusade, notably Cardinal Pelagius, refused. The subsequent attempt to seize Cairo got mired down, the Egyptian navy successfully cut off the crusaders’ supplies and forced them to sue for terms. The survivors were allowed to leave on the condition of returning Damietta, and so the crusade ended with nothing but shame and casualties ― except for the Teutonic Knights and Herman von Salza.  Salza had urged the acceptance of al-Kamil’s terms, thereby setting himself apart from the bulk of the leadership, while his knights had distinguished themselves in the fighting.

Recruits, grants, and privileges flooded in. The Order officially started to accept “confratres” ― secular men and women who, without taking monastic vows, affiliated themselves with the order for a limited period of time rather than for life. This significantly inflated their manpower reserves.  Meanwhile, the pope granted the Order a variety of privileges ― including all the privileges previously reserved for the Templars and Hospitallers. Frederick II likewise showered the Teutonic Knights with gifts of land and taxation rights, while the Patriarch of Jerusalem sang their praises.

Yet the Holy Land remained imperiled and Jerusalem and other holy sites were still in Muslim hands. The Teutonic Knights, like the Templars and Hospitallers, set about preaching and recruiting for yet another crusade. After the disastrous results of the two preceding expeditions (the hijacking by Venice of a crusade intended to restore Christian rule in the Holy Land for an attack on Constantinople and the fiasco on the Nile), the response was understandably anemic.

Frederick II, who had twice sworn to lead a crusade, kept putting off the date of departure, and he again employed Herman von Salza as his envoy to the pope to receive the necessary dispensation.  It was possibly Salza that came up with the idea of Frederick’s marriage to the heiress of Jerusalem, Yolanda (Isabella II).  The idea, whether it originated with Salza or the pope, was that Fredrick’s marriage to Yolanda would increase the emperor’s personal (material) interest in the Kingdom of Jerusalem and make him more ready to actually undertake the crusade he had committed himself to.

In any case, Salza undertook the role of marriage broker, negotiating between his comrade-in-arms from the Fifth Crusade, John de Brienne, King of Jerusalem by right of his deceased wife Marie de Montferrat, and Frederick II Hohenstaufen.  In the course of this activity, Salza evidently promised John de Brienne that he would remain King of Jerusalem as long as he lived, to be succeeded by any issue from Yolanda’s marriage to Frederick. In the event, however, the marriage was not yet consummated before Fredrick dismissed John de Brienne as superfluous and demanded homage from the barons of Jerusalem.

Frederick’s actions made a life-long, bitter enemy of his father-in-law, John de Brienne (who would soon lead papal armies against Frederick’s kingdom of Sicily). They also put Herman von Salza in an awkward position.  Nicholas Morton points out in The Teutonic Knights in the Holy Land 1190-1291 that neither John de Brienne nor the pope seemed to blame Salza for the Emperor’s actions, suggesting that he had not been complicit in a plot to mislead Brienne, yet his honor and reputation as a negotiator were at stake. Apparently, the Emperor, while contemptuously dismissing his father-in-law, felt sufficient qualms about sullying the reputation of his friend and supporter Salza to compensate him for the loss of reputation with yet more marks of favor.

Significantly, it was at precisely this time, in 1226, that the Teutonic Knights sought and received from Frederick II the right to colonize Prussia. It was to be in Prussia that the Teutonic Knights build a completely independent state, and where they survived as a major political power until the 15th century. But that was in the future and beyond the scope of this short essay. 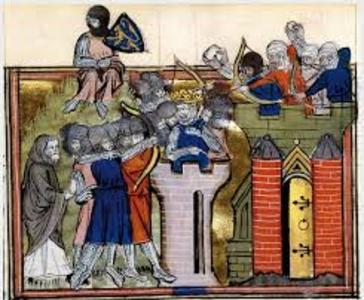 A Child of the Third Crusade: The Founding of the Teutonic Knights