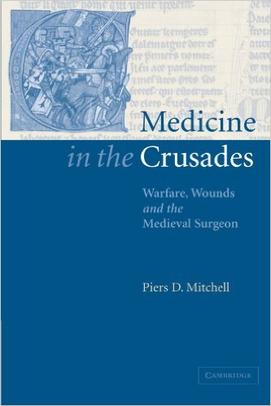 Review: Medicine in the Crusades by Piers D. Mitchell

Piers D. Mitchell is an osteoarchaeologist who was doing research on crusader period excavations in the Eastern Mediterranean when he discovered there was no published history of medical practices in the crusades and crusader states. Recognizing the importance of such a work for future scholars, Mitchell undertook to produce the book himself.

The result, published by Cambridge University Press, is a very valuable and practical reference book, organized logically and documented meticulously. Admittedly, for people without a medical, much less palaeopathological background, much of the books is heavy-going, but not incomprehensible. I found the description of the evolution of hospitals in the Holy Land particularly valuable. Likewise, the chapter on Frankish medical legislation was fascinating, as it provided evidence of both medical licensing and the principle of “malpractice;” medieval doctors could be taken to court and, if found guilty, punished for performing sub-standard operations or failing to apply recognized medical procedures. A discussion on the exchange of medical knowledge between cultures was useful, if less definitive than expected. Mitchell effectively refutes a number of misconceptions about the standards of medicine during the crusades and conclusively demonstrates that many highly sophisticated procedures were known and applied in this period.