Review: The Serpent’s Crown: A Novel of Medieval Cyprus by Hana Norton 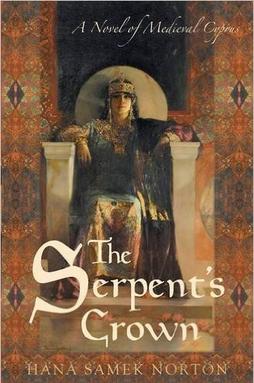 The history of medieval Cyrus is both fascinating and complex, and Hana Norton has clearly done considerable research into the often arcane and confusing relationships between the key players ― Lusignans, Ibelins, Montbeliards etc. She is evidently also familiar with Cyprus itself, its geography, climate and customs. Yet the strongest feature of this book is the heroine. Juliana is engaging, realistic, and not the least bit anachronistic, as ― unfortunately ― are many heroines of novels set in the Middle Ages. Instead, Juliana is throughout the book both a medieval noblewoman and a likeable human being, whose emotions are understandable and actions in character. I especially liked the fact that she makes mistakes and miscalculations.

Yet despite these two strong assets, the book as whole still failed to win me over. On the one hand, as a historian, I felt Norton went too far in making the deaths of both Aimery I and Isabella I of Jerusalem murders. Not only is there no evidence of this, there were not even rumors or suspicions of misdeeds reported at the time―and that in an age when accusations of poison were otherwise rife. Changing the course of history this much makes this book fiction, even alternative fiction, but not historical fiction. On the other hand, turning Maria Comnena into a venomous viper might be deemed a legitimate interpretation (since the characters of historical figures, in contrast to their actions, are open to interpretation), but it makes for very poor fiction. Norton’s Maria Comnena was too evil to be a credible character. She was more suited to a Walt Disney cartoon than a book that calls itself historical fiction.

Between these two extreme characters was the male hero, who for the first three quarters of the book was more fitted to operetta than historical fiction. In place of a hero of equal caliber to the heroine, the hero (who is variously called Guerin, Lasalle, Jean Armand, and de Lusignan) spends most of the book making abrupt appearances, usually in some sort of disguise, to rescue/abduct the heroine with his brilliant sword-play or clever schemes. These brief, dramatic appearances do nothing to develop him as a credible character. Other characters, such as John d’Ibelin are simply contradictory or unexplained. Why would the son of the venomous viper turn out to be such a decent fellow? Why would Juliana’s father-in-law first abduct her infant daughter at sword point only to return her without explanation much less compulsion later?

Meanwhile, the plot itself is so convoluted with sudden twists, surprises and unexplained events that I thought for much of the book that I had stumbled into a mystery rather than historical novel. About two thirds of the way through, however, the mysteries are all solved and the book becomes a straight-forward tale, which (I suspect) would frustrate readers who relish mystery.