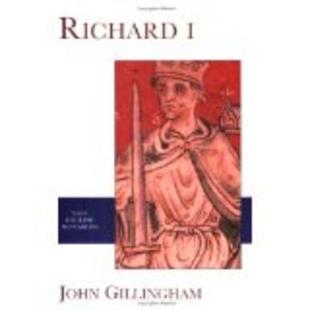 John Gillingham describes his book on King Richard I, one in a series of biographies of English Monarchs by Yale University Press, as a political biography. In his preface to the book he stresses that he is not attempting to analyze Richard Plantagenet the man, but rather the political legacy of King Richard I, and he explicitly excludes from his discussion Richard’s “inner life.” He does not look at him as a son, husband or brother, but only in the context of his effectiveness as a ruler — first as a deputy for his mother and/or father and later in his own right as Duke of Aquitaine and King of England. Essentially, Gillingham sets out to determine whether Richard was a “good” or a “bad” king.

The focus is justified by the fact that King Richard has been both lionized and vilified by historians over the centuries. As Gillingham catalogues, medieval historians saw in him a hero on the scale of King Arthur, Roland and Charlemagne. Later Plantagenet kings were judged in comparison with him — the highest praise being to come near to equaling him. Yet during the Reformation and the later Tudor era Richard started to fall into disrepute as a result of Protestant condemnation of the crusades. By the 19th century it was commonplace to dismiss his achievements as paltry because they did not promote Victorian values such as empire building, trade and sound fiscal policy. In the 20th century RIchard was condemned for spending too little time in England and “oppressing the masses” with his taxes for “worthless” ventures such as the Third Crusade — and his ransom, of course.

Gillingham points out that, long before the historical debate, Richard inspired extreme opinions in his lifetime. Adulated and adored by some of his subjects and supporters, he was demonized by his political enemies, particularly Philip II of France. He is credited with abusing noblewomen and maidens, with hounding his father to his grave, murdering his political opponents, and with betraying the cause of Christ while in the Holy Land. The ironic result, Gillingham suggests, is that the most objective contemporary commentary on Richard probably come from Muslim sources. Unfortunately for us, these only describe his actions during the less than two years in which he was active in the Holy Land.

Given the treacherous nature of his sources, Gillingham does an admirable job of depicting Richard Plantagenet based on what he actually did rather than on what people said about him. In doing so, he convincingly builds the case that Richard was a remarkably effective monarch — judged by the standards and values of his day. In doing so, he highlights the absurdity of expecting a mercantilist monarch in a feudal kingdom, much less a mild and tolerant ruler in a brutal and violent age.

What emerges is a complex but on the whole admirable and competent leader, a statesman as well as a general. As Gillingham documents, Richard was not just a dashing knight and outstanding commander, nor merely a brilliant tactician, strategist and logistician. He was a sound financial manager, who alone among the leaders of the Third Crusade was consistently in a financial position to recruit and provision troops. He managed to raise a truly enormous ransom without, in fact, beggaring his subjects. He was, to be sure, creative in his methods of raising funds — from selling offices to selling conquests (Cyprus). Rather than wrinkling our noses at these allegedly distasteful practices, however, we should consider that the alternative would indeed have been to tax the innocent poor rather than milk the grasping rich. He was also an astonishingly effective diplomat, not only in his complicated negotiations with Saladin, but in turning his erstwhile German enemies into allies, and in his tedious but eventually effective efforts to pry the Counts of Flanders and Toulouse out of the French camp and into his own.

Last but not least, despite his reluctance to discuss the private side of Richard, Gillingham does offer insight into Richard’s personality. We get glimpses of a man who was very well educated, loved music and was more than superficially pious. We learn that he had a fine and subtle sense of humor and often spoke half in jest, often using a light-hearted tone to deliver serious messages. While he clearly inherited the infamous Plantagenet temper, it did dominate him, and he was not irrational even when angry. Most important, Gillingham’s Richard is a man of many parts far removed from the buffoon-like Richard found in so many films and novels that reduce him to a brutal idiot or a jovial but empty-headed figurehead.

This biography is well-worth reading and is a must for anyone interested in the period.

Richard I  by John Gillingham: A Review