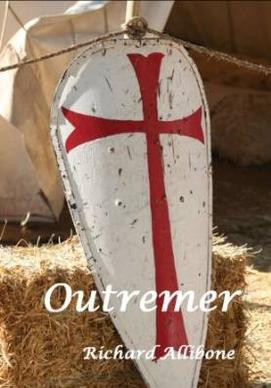 The opening chapter of this book was so engaging and insightful that it perhaps raised my expectations excessively.  The opening scene describes the capture of the True Cross during the Battle of Hattin and captures vividly both the carnage and the emotions of the Christian participants. Unfortunately, Allibone singularly fails to live-up to the promise of this first tantalizing chapter.

Indeed, from this first action packed scene he backs away from his subject and begins to write in a laborious style introducing layers of narrators who spend the first quarter of the book retelling the Battle of Hattin from different perspectives. Even after leaving the regurgitated topic of Hattin, Allibone maintains for the most part (but not consistently) the first person narrative so that the reader is told about events rather than shown them.  Allibone is at pains to describe his narrator as sober and objective, so rather than a lively, first-hand personal account of events, the reader is treated to a scholarly description that sometimes degenerates in to pages and pages of tedious debate.

The book is further marred by abrupt and inexplicable switches in tense — sometimes in the middle of a scene. Bizarrely, for the only scene that describes the principal narrator’s love and marriage — the only really personal scene in the whole book — the author switches from the first to third person narrative.  It all makes for an inconsistent mix in which the story-telling detracts from the story.

Equally irritating is that despite the very meticulous research, the use of Arab and contemporary terms and lengthy direct quotes from contemporary sources, the book is still filled with significant inaccuracies.  The worst of which is the premise, on which the entire book is based, that peaceful co-existence between the crusader states and their Muslim neighbors was possible.  While it is true that a degree of co-existence had prevailed on and off because the various Islamic states were often at war with each other, Nur ad-Din and after him Saladin both declared jihad against the Christian states. It was Saladin’s stated intention to utterly destroy the Christian presence. As the Israelis know, you can’t peacefully co-exist with states that deny your right to exist! Saladin was undoubtedly a rational and honorable man. He was not a fanatic. He was capable of generosity, even toward his enemies, and he was willing to make tactical truces with the Christian leaders when it suited his purposes — mostly when his own armies were exhausted and disintegrating or when drought threatened his power base. But at no time did he waver from his goal of destroying the Christian Kingdom of Jerusalem. Thus, peace was not an option.

Likewise, although even his own Arab source for Richard I’s massacre of hostages at Acre only speaks of “fighting men,” Allibone makes a point of having women and children slaughtered — something for which there is absolutely no historical evidence. Likewise, he repeats the myth that the Crusaders killed all inhabitants of Jerusalem in 1099 and makes no mention of the many times when the crusaders also let Saracen garrisons walk away free such as at Ascalon in 1153. It is equally baffling why, with so much apparent attention to accuracy, he gives William Marshal a prominent role in Richard I’s crusading army when it is well known that Marshal remained in England as one of Richard’s trusted justicars.  Or why pretend that the squire of the fictional narrator is a real historical figure and then conform in not a single known fact about Ernoul? (In this novel Ernoul is the orphan of low-born crusaders from Gascony who is crude of speech and ends his life in back in France; the real Ernoul was probably the son of a prominent family from Outremer and most certainly served Balian d’Ibelin; he was highly educated — so much so that he wrote a chronicle that is one of the two contemporary Christian sources for the period. He probably ended his life as a leading noble in the Latin Kingdom of Cyprus.)

In short, while the book is on the whole accurate, it deviates significantly on important points, thereby marring its value as a source of history.  It is furthermore written in a cumbersome and inconsistent style.  The result is that the book both fails to educate and fails to bring to life the exciting events or colorful characters of this fascinating episode of history.