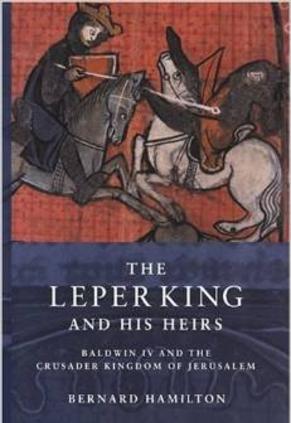 This is an excellent, detailed and well-documented account of the crusader kingdom of Jerusalem in the late 12th century. It focuses on the quarter century of Baldwin IV's life span, 1161 to 1186. This was a particularly critical period in the history of the crusader kingdom, and Hamilton's book provides details too often skipped over or even blurred together in accounts that try to cover the whole two hundred years of crusader history. Furthermore, Hamilton provides an excellent summary of his sources up front and impresses with his familiarity with not only Latin and Arab, but Greek, Jewish and Armenian sources.

Particularly impressive was Hamilton's treatment of Reynald de Chatillon. Chatillon is usually depicted as a rogue adventurer, more robber than baron, and often blamed for the war with Saladin. Hamilton, in contrast, effectively defends many of Chatillon's most controversial actions. While not denying his violent and ambitious character, Hamilton convincingly argues that Chatillon followed sound strategic principles when launching his raids into Sinai, putting Christian warships in the Red Sea, and even when breaking the truce with Saladin to attack a heavily armed caravan.

Hamilton's treatment of Raymond of Tripoli is less convincing. He tries to paint Tripoli as a treasonous threat to the throne, and even suggests that Sibylla's marriage to Guy de Lusignan was arranged by King Baldwin in an attempt to prevent a coup by Tripoli. The evidence is very weak for this and contradicted by other accounts, notably the Chronicles of Ernoul, that other historians have followed. Furthermore, Baldwin soon withdrew his favor from Lusignan, while Sibylla remained remarkably loyal -- two historical facts that give credence to the more common intepretation of a love-affair between Lusignan and Sibylla forcing the king's hand. But even here, where Hamilton's arguments are weak, he presents them cogently and names his sources, leaving the reader in a good position to judge for himself which interpretation of history he finds more compelling.

Where this book falls short of the mark is in the essential biographical function of making the subject come to life. For all his meticulous reporting on what happened during "the Leper King's" reign, Hamilton singularly fails to get inside the leprous skin of his subject and help us understand him. We are given no inkling of what he was thinking and feeling, why he behaved in certain ways, how he succeeded in winning the undoubtedly loyalty of his subjects despite his illness or what motivated him at critical junctions. We are not even told until the epilogue that he was chaste but not particularly devout.

Baldwin IV of Jerusalem deserves a better biography precisely because despite his severe handicap he successfully held his kingdom together in a very difficult period, and despite his severe physical handicap he repeatedly defeated Saladin on the battlefield. He also pursued a highly sophisticated foreign policy, which showed profound understanding of the geopolitical position of his kingdom. I would like to read a book that explores the character and psyche of such a man; Hamilton unfortunately does not.

The Leper King and HIs Heirs  ​by Bernard Hamilton