This is fun historical fiction with a cast of colorful characters, lots of dramatic action and exotic settings. I have to admit liking this book — and not just because Balian d’Ibelin is portrayed sympathetically -- yet it’s neither great literature nor good history. The “bad guys” are a little too bad, for my taste, and the “good guys” are a little too modern. There are scenes that seem totally removed from reality altogether, as when the Baron of Toron frolics at his castle with a squire and his young bride but no apparent retinue, staff or responsibilities. There are numerous little errors as well: Balian was not lord of Nablus, (that was his wife’s dower portion), his brother left the kingdom rather than swear allegiance to Guy de Lusignan and was not at Hattin. Isabella was separated from her mother and step-father for three years before her marriage. Turcoples were native Christian troops, not Muslim converts or men of mixed Frankish and Syrian blood. Swords at this time were rarely longer than two and a half feet — not the five foot swords described. Yet despite these errors, the book on the whole conveys the atmosphere of the times and captures a sense of the conflicts and values of the age far better than Holland’s prissy and egotistical courtiers of “Jerusalem.” 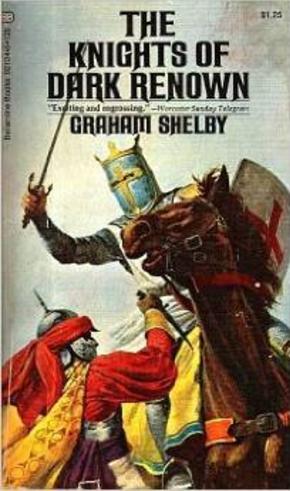 Review: The Knights of Dark Renown by Graham Shelby