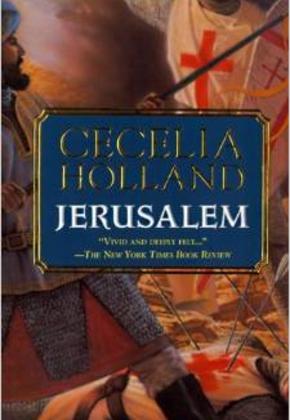 Holland clearly is an experienced writer with considerable competence. She can construct a good scene, build up suspense and her characters are nuanced and complex, yet this book utterly failed to captivate me.

In part it was the constant, minor inaccuracies that nagged at me like flies.  No, it’s not terribly important that Felx isn’t a German name (Felix is) and “Deutschlander” isn’t a word — in any language. No, it’s not important that Nablus belonged to Maria Comnena not Agnes de Courtney, or that Baldwin d’Ibelin wasn’t Balian’s younger, landless brother, but the first born and Baron of Ramla and Mirabelle, one of the richest baronies in the Kingdom. But it rubbed me the wrong way that the author of a book titled “Jerusalem” had obviously never been there. If she had, she would know the Temple Mount is not the highest point in the city and that the David Gate (now Jaffa Gate) faces west not east, among other things. It also set my teeth on edge to have 12th century barons portrayed as earring-wearing dandies with feathers in their caps, while the court scenes read like Versailles in the age of Louis XIV rather than like barons of a Kingdom conquered and held for a hundred years by cagy, clever, often brutal, but astonishingly successful fighting men.

To be sure, Holland wrote her novel before the excellent histories of the period by Bernard Hamilton and Malcolm Barber were released, so she must be forgiven for her inaccurate portrayal of Baldwin IV’s leprosy. And, of course, she is within her rights as a novelist to completely ignore the subsequent Queen of Jerusalem, Isabella, and to make Tripoli a coward on the Litani (although historically he captured Saladin’s nephew), but as a historian the gratuitous changes to the historical record that do not move the plot forward just seem sloppy. Why have Balian d’Ibelin taken captive at both the Litani and Hattin when he was captured at neither? Why refer to Farrukh Shah as Saladin’s brother when he was his nephew?

For readers with no particular interest in accurate history, these errors might seem unimportant, yet it was not just the eclectic mixture of historical fact and sheer fancy that ultimately made me dislike this book: it was the lack of positive characters. Holland’s characters may be complex but only in their layers of unsavoriness. I am repelled by male protagonists for whom “love” manifests itself as the desire to rape, and by female leads that fling themselves at men they hardly know and beg to be debauched. In this book there are no heroes one can really care about: all the Christian lords are either effeminate cowards or brutal barbarians, and even Saladin is portrayed as a vengeful tyrant. There is no nobility or honest kindness and affection in this book, and so it left a sour taste in my mouth: it seemed like an insult to Jerusalem.