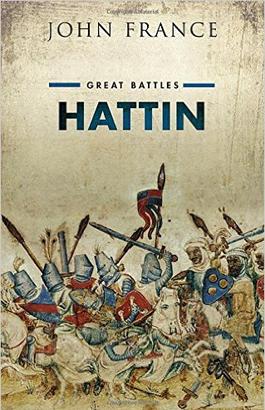 Despite its title, this book is not about a battle. Instead, it is a concise history of the historical events that led up to the crushing defeat of the army of Jerusalem by Saladin in 1187, and an equally concise discussion of the aftermath and impact of Hattin right up to the present day. For anyone interested in understanding the rhetoric about “crusades” in the context of today’s conflict with ISIS, the Muslim Brotherhood, and al Qaida, this book is an incredibly useful starting point.

“Hattin” is only 168 pages long, contains useful maps, a collection of interesting photographs and a useful bibliography. Despite its brevity, on the whole it avoids over simplification and the usual misrepresentations of basic facts. France, for example, makes clear right on page 3 that “many parts of the Middle East, especially those areas seized by the westerners, were not Muslim at all but eastern Christian: their populations often welcomed the new rulers.” He highlights the fact, so often forgotten or ignored today, that Muslim raiders had burned St. Peter’s in Rome in 847 and draws attention to the very real fear of Islamic expansion and conquest that shaped European attitudes right up to the First Crusade. Yet he also notes that once the crusader states had been established “the western settlers were far from fanatical, understanding the importance of exploiting Muslim divisions.” (p.37)

France does a remarkable job of making the complex and (particularly to Western eyes) very confusing divisions and rivalries within the Muslim world comprehensible. He manages to boil down the intrigues that led to Saladin’s seizure of power in Egypt to the essentials, and likewise avoids the usual drivel about the barons of Jerusalem being self-seeking and exceptionally greedy or perversely divided. France notes soberly: “All aristocracies were inevitably divided by factional struggles in which personal likes and dislikes played a major role.” (p.65) In short, there was nothing particularly unique about this in the Kingdom of Jerusalem, and nothing inherently fatal about it. France also highlights that “the barons of Jerusalem were not, for the most part, fanatics…but they were fiercely and proudly Catholic and deeply aware of the dangers posed by their Muslim neighbours to their very existence…As a whole they were quite prepared to deal peacefully with the Muslims, but they were also aware that they needed to be strong….”

France does his best to reconstruct the Battle of Hattin itself, but given the absence of first-hand Christian accounts the task is nearly impossible. The contradictions in later accounts written with the benefit of hindsight and designed to serve various contemporary agendas and biases, make a variety of interpretations both plausible and defensible. France’s account is no more than one plausible interpretation, and he only devotes 15 pages to the battle itself. This is completely justifiable as the book far from being about tactical details of no particular relevance in the 21st century is about the impact of Hattin both strategically and ideologically.

France’s most valuable contribution to the literature on the crusades and Hattin is his last chapter titled “Hattin Today: A Poisoned Heritage.” In this chapter he not only traces and explains the emergence of the “chivalrous” Saladin myth in the 13th and later centuries, he catalogues the various ways in which Saladin and Hattin have been harnessed to modern ideologies and aspirations from the Ottoman empire to ISIS.  France argues, “the European myth of Saladin arose from the desire among the military aristocracy to show the victor as a worthy, indeed praiseworthy opponent who, underneath it all, is ‘one of us’ in some sense.” (p. 142) In the Muslim world, on the other hand, by the 19th century “the crusader-imperialist linkage catered to the growing sense of victimhood across Islam….” Later, he notes, “the parallel between the Latin kingdom of Jerusalem and Israel, which occupied much the same territory, provided a permanent reminder of the crusading past.” (p. 152) He notes that Saddam Hussein gave one of his divisions the name “Saladin” — and built a statue of himself dressed as Saladin. The PLO had both a “Saladin” and a “Hattin” brigade. The Muslim Brotherhood and ISIS to this day lay claim “to the inheritance of Saladin and aspire to cleave a way to a new Hattin.” (p. 159)

Given the very real fact that Hattin has, as France puts it, “become a rallying cry for radical Islamic groups, and a factor in the politics of hate in the Middle East,” (p. 168) anyone who wants to understand international affairs today owes it to himself to read this book. I cannot recommend it highly enough.