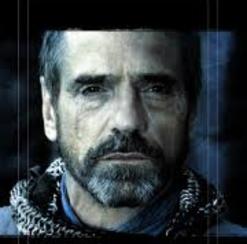 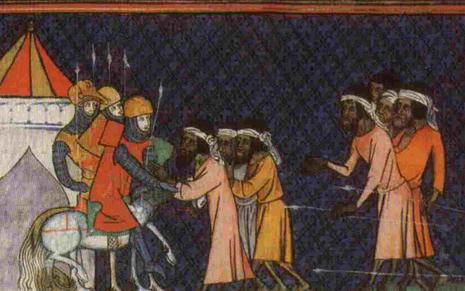 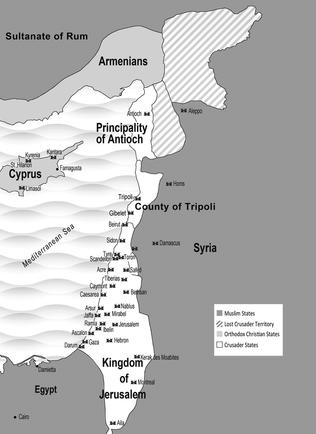 Raymond of Tripoli, the most powerful baron in the Kingdom of Jerusalem in the last quarter of the 12th century, was a controversial figure in his own lifetime and remains so today. His independent truce with Saladin in 1186 threatened the very existence of the kingdom at a time when it was surrounded by enemies, and the Templar Grand Master accused Tripoli of conspiring with Saladin for a Saracen victory at the Battle of Hattin. In short, Tripoli has been blamed for nothing short of the disaster at Hattin and the loss of the Holy Land to Saladin. Yet, later historians such as Sir Stephen Runciman, have seen in Tripoli a voice of reason, compromise and tolerance in positive contrast to the fanaticism of the Templars and men such as Reynald de Chatillon. Tripoli was the inspiration for Ridley Scott’s “Tiberias” in the Hollywood film “The Kingdom of Heaven.”

While the Grand Master’s accusations can largely be dismissed as self-serving (the two men detested one another), and Scott’s portrayal is far from fact, even the most reliable and credible chronicler of the Kingdom of Jerusalem in this period, William Archbishop of Tyre, has left an ambiguous image. On the whole the Archbishop of Tyre portrays Tripoli in a positive light, yet he also off-handedly suggests that Tripoli was plotting a coup against Baldwin IV in 1180.

So who was Raymond of Tripoli?

The County of Tripoli was created after the liberation of Jerusalem in 1099 by Raymond Count of Toulouse, who was of the most important leaders of the First Crusade. Toulouse was widely believed to have coveted the crown of Jerusalem and when it fell to Godfrey de Bouillon instead, he set about conquering his own kingdom eventually capturing the entire coastal area between the Kingdom of Jerusalem and the Principality of Antioch, thereby giving the Latins control of three contiguous states along the shore of the Eastern Mediterranean. Although de jure autonomous, in reality the County of Tripoli did not have the resources to defend itself and so it was always quasi-dependent on its larger, more prosperous neighbors, Antioch and Jerusalem. In return, the Counts of Tripoli usually brought their knights, turcopoles and sergeants to the feudal muster of Jerusalem.

The Raymond of Tripoli under discussion here was in fact the third by that name. His father Raymond II of Tripoli had been Count of Tripoli from 1137 and his mother, Hodiera, was a Princess of Jerusalem, the younger sister of Queen Melisende. However, the marriage was so notoriously turbulent that Queen Melisinde intervened and recommended an amicable separation. In 1152, Raymond II was assassinated, leaving his minor son Raymond III, his heir. The King of Jerusalem served as regent until Raymond came of age, and not long after this, in 1164, Raymond was taken captive by the Saracen leader Nur ad-Din. He was not released for eight years, and became proficient in Arabic while in captivity. When he was set free, it was in exchange for a ransom largely contributed by the Knights of St. John, and in return he gave the Order considerable territory on his western border, where they built a series of castles including the famous Krak de Chevaliers. So far, Raymond’s career had not been very auspicious.

In 1174, however, King Amalric died suddenly, leaving his 13 year old son Baldwin as his heir.  As the closest male relative of the young king, Raymond of Tripoli was chosen, although not immediately, as regent. William of Tyre describes him as follows:

He was a slight-built, thin man. He was not very tall and he had dark skin. He had straight hair of medium color and piercing eyes. He carried himself stiffly. He had an orderly mind, was cautious, but acted with vigor.

Contemporary Arab chronicles noted he was highly intelligent, and this was borne out by his sophisticated diplomatic policies in the coming 15 years.

Shortly after becoming regent, Raymond also married for the first time, taking to wife the greatest heiress in the Kingdom, Eschiva, Princess of Galilee. She was a widow with four sons by her previous marriage, but William of Tyre explicitly states it was a happy marriage and that Tripoli was on excellent terms with his step-sons. More important, however, the marriage made Tripoli the greatest magnate in the realm owing 200 knights to the crown. Thus, even after he stepped down as regent when Baldwin IV came of age in 1176, he remained a powerful figure inside the Kingdom of Jerusalem as well as in his own right as Count of Tripoli.

By now, however, it was evident that Baldwin IV was suffering from leprosy and was not going to sire an heir — or live very long. The need to find a replacement was acute. Baldwin had two sisters, the elder of which, Sibylla, was the heir apparent to the throne, but the constitution of Jerusalem dictated that a female heir could only rule jointly with a consort. Sibylla was duly married to a suitable candidate (William Marquis de Montferrat), but he promptly died of malaria, leaving her a young (and pregnant) widow. In 1180, she made a surprise and hasty marriage to a young nobleman only recently arrived in the Holy Land, Guy de Lusignan. There are various versions about why she married Guy (see biographies of Sibylla and Guy). The version provided by William of Tyre is that the Prince of Antioch, the Baron of Ramla and Mirabel, and Raymond of Tripoli had been planning to marry Ramla to Sibylla and then depose Baldwin IV, so he married his sister off in great haste — only to regret it latter.

Because Tyre is considered such a knowledgeable insider and sober historian, most modern historians accept this version uncritically. I find it flawed in many ways. First, if Tripoli had been intent on power, he was in a far better position to seize it when he was regent. Secondly, Tyre admits that the trio of lords came to Jerusalem as if to attend Easter Mass at the Holy Sepulcher, and when they found Sibylla already married they went away peaceably — which hardly sounds like the behavior of men intent on a coup d’etat. Most important, Sibylla’s behavior from this point until her death ten years later was that of a woman passionately in love with her husband. Had she in fact been married in haste against her will to a man far beneath her station by a panicked brother, she would probably have been resentful and receptive to the idea of setting the unwanted husband aside the minute her brother changed his mind and wanted Guy removed from the succession. Instead, she resisted vehemently, and later went to great lengths to get her husband crowned king despite the opposition of the entire High Court.

Meanwhile, Baldwin IV was getting weaker. He briefly made Guy his regent in the hope of being able to retire from the world and prepare to face God, but Guy was such an unmitigated disaster that he took the reins of government back into his decaying hands. He then took the precaution of having his nephew (Sibylla’s son by William de Montferrat) crowned co-king as Baldwin V, and the High Court (i.e. his peers) selected Raymond of Tripoli to be regent after Baldwin IV’s death. The latter occurred in 1185, and Raymond duly became regent of Jerusalem a second time. He explicitly refused to be the guardian of the young king, however, arguing that if anything happened to the boy he would be accused of have done away with him.

Clearly some people thought him capable of this, and Arab sources suggest that he already coveted the crown, but no one suggests that, in fact, he did murder the young king, who was in Sibylla’s not Raymond’s custody when he died in August 1186. What followed was clearly a usurpation by Sibylla (see the Constitutional Crisis of 1186) which left the crusader states in the hands of a completely incompetent man. Raymond’s refusal to pay homage to Guy de Lusignan was completely comprehensible under the circumstances. His separate peace Saladin, on the other hand, was just as clearly treason because it endangered not just the usurper Guy but every man, woman and child in the crusader states.

Raymond soon saw the error of his ways, however, when a Saracen “reconnaissance force” (passing through his territory on a safe-conduct he was compelled to grant by the terms of his treaty with Saladin) slaughtered a much smaller Christian force that had the audacity to attack it. The attack was led by the Grand Master of the Knights Templar, who was one of only three Templars to escape tthe debacle. The sight of Templar heads carried on the tips of Saracen lances so distressed Raymond that he heeded the pleas of the Baron of Ibelin to make peace with Guy de Lusignan. Tripoli did homage to the usurper as his king, and was received the kiss of peace from Guy.

The problem was that while Raymond’s action (and the abrogation of his treaty with Saladin) healed the fracture of the kingdom, it did not turn Guy de Lusignan into a competent leader. Raymond of Tripoli dutifully brought his troops to the feudal muster called by Lusignan in late June 1187, and he followed Lusignan’s orders, even though he vehemently disagreed with him. The catastrophe of Hattin was not of Raymond’s making; it was Guy de Lusignan and Grand Master of the Temple between them who had engineered the unnecessary defeat. (See Hattin.)

Trapped on the Horns of Hattin, Raymond of Tripoli led a successful charge through the Saracen lines. There is nothing even faintly cowardly or treacherous about this action. It was the most effective tactic the Franks had against the Saracens — the charge of massed heavy cavalry. It was a tactic Richard the Lionheart used to win at the Battle of Arsuf. It was not the charge that discredited Tripoli, but the fact that so few men broke out with him, and apparently no infantry. But that was hardly Tripoli’s fault. He spearheaded the attack with is knights. It was the duty of the King to reinforce his shock-troops. Something Guy de Lusignan singularly failed to do.

So the Kingdom of Jerusalem was lost, and Raymond of Tripoli retreated to his own county to die within a few months by all accounts a broken man.

In summary, Raymond of Tripoli was a highly intelligent, well-educated and competent man, who as regent and Count of Tripoli ruled prudently and effectively. Yet he was condemned to watch as a parvenu usurper led the crusader states to an avoidable disaster. It is hardly any wonder that he harbored thoughts of seizing the throne himself when the alternative, as history was to show, was so totally unsuited to wear a crown. If Tripoli was a traitor, it was for the right reasons: to save the kingdom from destruction. For me his more a tragic figure than a traitorous one. 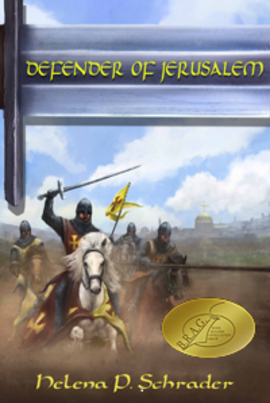 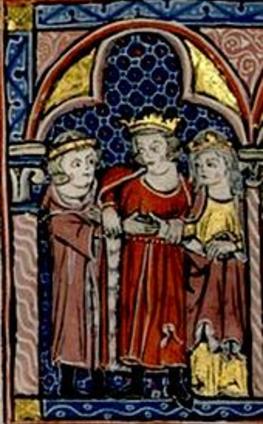 Raymond of Tripoli is a character in "Defender of Jerusalem"