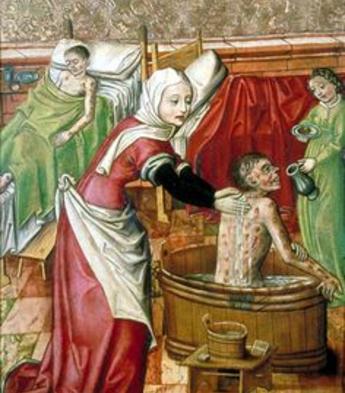 King Baldwin IV of Jerusalem was a leper. This fact is so shocking and so exceptional in the history of Western monarchies that Baldwin has gone down in history as “the Leper King.” Most people know nothing else about him, not even his Christian name.  Portrayals of Baldwin in literature and art nowadays use his leprosy mostly for sensationalist effect. Thus in the Hollywood film “The Kingdom of Heaven” he was given a mask to disguise his face, which is only revealed after his death. In Cecilia Holland’s “Jerusalem” men quail at the sight of him, but she utterly ignores the devastating impact on Baldwin’s mobility and eyesight and shows no understanding whatever of the real impact and progress of the disease. Yet what is significant about Baldwin IV’s leprosy is not the disfigurement it caused but the fact that he could be a leper and remain a respected and effective king. How was that possible?

Without doubt, leprosy is one of the most appalling diseases known to man. Victims of the disease suffer from symptoms including a loss of feeling in their affected limbs, a discoloring and hardening of the skin, disfiguring growths or nodules that deform the face, hands and legs, open ulcers, particularly on the soles of the feet, and, in its most virulent form, the disease can deform even the skeleton and skull, while progressively triggering a deterioration of control over one’s limbs, leading finally to the loss of toes, fingers, ears, noses, and eyesight. This gradual decay of the body led observers to compare lepers to the “living dead” or “walking corpses.”

Leprosy is a global phenomenon, present today on every continent.  While some scientists suggest it originated in East Africa (along with mankind and horses), the oldest anthropological evidence of the disease is a nearly 3,000 year old skeleton found in India. Certainly it was known in ancient Egypt, ancient Greece, ancient China, and is recorded in the Old Testiment as well.

In Western medical texts, Hippocrates described symptoms that match leprosy as early as 460 BC, but no cure was found for leprosy until the 20th century. Furthermore, while modern medical research shows that as much as 30% of a population may become infected during an epidemic, once endemic, only 5% of any given population is likely to contract the disease. However, that research was not available until the last century, and throughout most of human history the disease was believed to be not only incurable but highly contagious.  At the extreme, some medical tracts (including Arab ones) suggested that just breathing the same air as lepers could result in infection. It was this terror of catching such a horrible and incurable disease that led many societies to ostracize lepers, notably the Jews and the Germanic tribes of northeastern Europe excluded lepers from their societies.

So how could there be a leper king? The key is that he was king in Christian Jerusalem in the late 12th century. By this time, Christianity had come to view leprosy not as a curse, not as an outward expression of sin, not as a form of divine punishment nor even something unclean, but rather as a symbol of divine grace.

According to the gospels, Christ cured a leper following the Sermon on the Mount, and in the gospel of Luke (16:19-31) a poor beggar “covered with soars” called Lazarus is scorned by a rich man but finds favor with God. In the Medieval tradition, this man was a leper and Lazarus became the patron saint of lepers. The significance of lepers in the New Testament is twofold. First, leprosy was at the time incurable, so that healing a leper could only be a miracle, a divine act, and Christ demonstrates his divinity by curing the leper. Second, and often overlooked today, lepers were outcasts in Jewish society, prohibited from entering the Temple, so in curing the leper Christ was extending his grace even to outcasts.

By the 4th century AD, Church leaders in both the East and the West had seized upon these biblical references to argue that the greatest Christian virtue was to demonstrate love and charity toward the outcasts of society — something best demonstrated by love for those most commonly rejected in heathen societies: lepers. Within a short space of time, the sufferings of Job were associated with leprosy, and leading theologians reminded the Christian community that each leper (no less than any other man) had been made in God’s image and been redeemed by Christ.

The argument went farther: Disease humbled even the proudest and wealthiest, bringing them closer to God, and no disease did that more thoroughly than leprosy. Far from being a punishment for sin, therefore, leprosy was the ultimate test of righteousness. While the victims were, it was argued, already marked by God for salvation, those willing to show them Christian love and charity would also win the favor of God. Legends started to evolve in which Christ appeared on earth as a leper, and the disease started to be referred to as “the Holy Disease.”

Furthermore, early Christian advocates of leprosy as divine grace did more than preach; they led by example. The lives of saints often highlight acts of charity or kindness toward lepers, including kissing them. Likewise, from this period onward, we can trace the development and spread of hospitals especially established for the care of lepers, particularly in the Byzantine Empire. They are recorded in Constantinople itself and all the way to Alexandria. Notably, there was an important leper hospital in Jerusalem as well.

The establishment of leper hospitals enabled the removal of lepers from homes, markets, and work-places and so to a degree isolated lepers from mainstream society. No matter what the Church preached about the Christ-like nature of loving lepers, most ordinary humans preferred not to undergo the ultimate test of holiness by suffering such a debilitating and humiliating disease! A degree of segregation was therefore both rational and understandable. It is also notable, that many of these establishments were large complexes with their own churches, dormitories, kitchens, water reservoirs, orchards and land. People, whether the wealthy relatives of victims of the disease, or men and women anxious to gain credit in heaven were willing to endow leper hospitals or make charitable gifts to them in coin or kind.

Leper hospitals were not prisons, however, in which lepers were incarcerated against their will. On the contrary, the evidence suggests lepers could come and go as they pleased, and if they remained it was because they benefited from the charity and care they received rather than from compulsion. Furthermore, the lepers in these hospitals largely governed their own affairs, electing their own officials, who they then obeyed as in the monastic tradition. Likewise, they had chapter meetings, like monks, and female lepers appear to have had the same rights as their male counterparts. In at least one case a woman is recorded as a “commander” of a leper hospital.

Significantly, however, it was in Jerusalem that a leper hospital grew into an order in its own right, the Order of St. Lazarus. The leper hospital had been established during Byzantine rule of the Holy City but after the establishment of the Latin Kingdom of Jerusalem, it was taken over by the Knights Hospitaller. By in 1147, however, the leper hospital had broken away from the Hospitallers and was recognized as a religious order in its own right. Initially referred to as the Leper Brothers of Jerusalem, the members of this new religious order soon came to be called the Knights of St. Lazarus, and adopted a green cross as their symbol. (Note: the Templars wore red crosses on white, the Hospitaller at this time white crosses on black, and the Teutonic Knights adopted a black cross on white.)

Membership in the Order of St. Lazarus was mandatory for knights of the other militant orders who developed leprosy after taking holy vows, and for members of the nobility of Outremer, who came down with the disease, but was not confined to these individuals. Any leper, of course, could join the community, and healthy individuals, intent on showing Christian love and charity, could do so by joining the order and serving the lepers. Enough healthy knights belonged to the Order by the 13th century for knights to have fought at the Battle of Gaza in 1244, the Battle of Ramla in 1253, and during the defense of Acre in 1291. They may also have fought at Hattin in 1187.

All the above battles post-date the death of Baldwin IV and while that may be pure chance, it seems more likely that it was Baldwin IV’s steadfast service to his kingdom on the battlefield that inspired knights to join the Order of St. Lazarus and encouraged the Order itself to take on a more militant role. Baldwin initially led his armies on horseback, despite being unable to use his hands, and later led from a litter. A greater example of courage from a man suffering from such a debilitating disease can hardly be imagined.

But it is equally significant that his powerful barons, their knights, and all the free burghers of the Kingdom of Jerusalem were willing to do homage to and obey a leper. Baldwin IV could not have defeated Saladin repeatedly (as he did!), if he had not commanded the undivided and unquestioning loyalty of his subjects. This fact, more than his own actions, tells us that leprosy in the crusader Kingdom of Jerusalem was indeed recognized as a “holy disease.” Baldwin IV’s leprosy, far from evoking contempt or even revulsion, as Hollywood and many modern writers would have us believe, inspired awe among his contemporaries.