The deteriorating defensive position of the crusader kingdoms in the last decade of King Baldwin's reign and the various attempts to counter the increasing threat from Saladin are an important theme in award-winning: 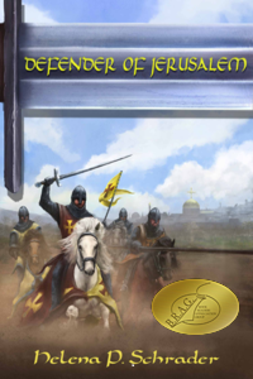 The Knights Templar at Jacob's Ford 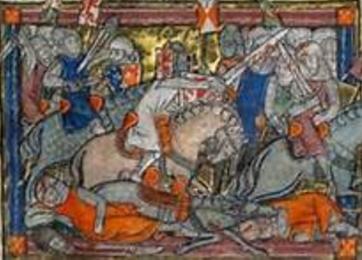 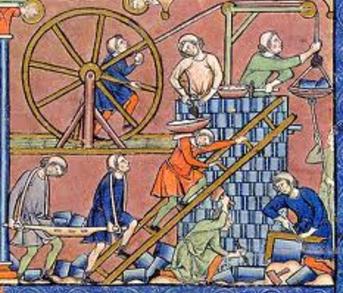 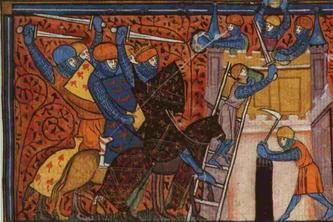 On the Upper Jordan River, between Lake Huleh and the Sea of Galilee, one of the three fords across the Jordan was located at a place known to the Arabs as Bait al-Ahzan and to the Christians as Jacob’s Ford. The ford gave access to the fertile valley of Upper Galilee in the Kingdom of Jerusalem. Here, by the mid-12th century, the Franks had built or occupied what contemporary Arab chronicler al-Fadil described as “celebrated cities, encircled by flourishing villages, shady gardens, navigable rivers, high fortresses, and powerful walls in the enceinte of which their palaces were built.” (Quoted in: Barber, p. 19.)

Jacob’s Ford was also, according to Salah ad-Din’s secretary Imad ad-Din, only a day’s ride from Damascus. Saracen forces could rapidly muster on the eastern shore, and strike across the ford to raid in the fertile lands of northern Galilee or penetrate deeper into the Kingdom, threatening the coastal cities of Acre and Tyre. Jacob’s Ford was, in short, a location of extreme strategic importance to the defense of the Kingdom of Jerusalem.

Yet for the first three quarters of the 12th century the ford was not fortified for reasons that remain obscure to us. Possibly there had been agreements with the Saracens that neither side would establish castles in the region. At a minimum, according to the so-called Chronicle of Ernoul, Baldwin IV had agreed not to fortify the ford. Yet, at the urging of the Knights Templar, King Baldwin reversed his decision and construction of a castle began at Jacob’s Ford in October 1178.

The Templar role was significant.  Malcolm Barber argues in his essay “Frontier Warfare in the Latin Kingdom of Jerusalem” (France, John and William Zajac. The Crusades and their Sources, pp.14-15.) that the military orders were at this time trying to impose a more coherent defensive strategy on a kingdom which up until then had been defended too haphazardly by local lords. Certainly, it was the Templars who agreed to man the castle on completion.

Because of the proximity to Damascus, the construction of the castle itself was extremely dangerous ― another factor that might have mitigated against its construction in the first place. In the event, the Franks invested enormous resources to build a powerful castle in just six months, while (as they well knew) Salah ad-Din was pinned down by one of his  many campaign against his domestic rivals. The result was that by March 1179 a castle, called Chastellet, was largely complete. It consisted of a square composed of massive walls with towers at each corner and a keep on the western wall.  Muslim chroniclers claim the walls were more than five meters (ten cubits/fifteen feet) wide.

What wasn’t finished were the outer works. These were still under construction by a veritable army of masons and other workmen such as blacksmiths, carpenters, and laborers, including 100 Muslim slaves. With each day the castle was on its way to becoming more formidable. Salah ad-Din was suitably alarmed.

The Sultan sent to the King of Jerusalem and offered to pay him 60,000 dinars if he would dismantle his new castle. Baldwin IV said no. The Sultan upped his offer to 100,000 dinars, clearly dreading the cost of reducing the castle by force. Again Baldwin IV said nos. No sooner had his second offer been rejected than Salah ad-Din began raiding the surrounding countryside from which the castle obtained supplies. The garrison of 80 Knights Templar and their squires was inadequate to stop this raiding. Emboldened, the Sultan ordered an assault on Chastellet ― only to have his forces beaten back with heavy losses including one of his most important emirs.

The Sultan turned to raiding deeper inland, eventually becoming embroiled in the battle on the Litani (Marj Ayun), but by August 1179 he was back. And this time he brought his siege equipment.

The siege began on August 24, 1179 and the outer compound fell by the evening of that first day.  However, the outer compound was not properly fortified. It did not yet have serious walls and was probably protected only earthworks and/or wooden defenses. It is unlikely to have been very fiercely defended under the circumstances. Most of the workers would have fallen back and taken refuge in the castle proper.

Salah ad-Din did not waste time with more assaults, however. He immediately set to undermining the castle and within days he had dug deep enough to believe the walls could be breeched. Fire was set to the wooden props holding up the tunnel. It had no impact on the castle.  Salah ad-Din had to offer a dinar to anyone willing to risk his life to put out the fire and eventually the fire was brought under control. The digging continued. Meanwhile, news reached the Sultan that Baldwin IV was again mustering the army of Jerusalem to come to the castle’s relief. His sappers were urged to greater effort.

Four days later, at daybreak on August 29, a large segment of the wall collapsed. The fire used to destroy the tunnel supports blew into the castle itself, setting fire to the tents and many wooden structures within the walls. This was the height of a Palestinian summer ― and the third year of drought.  Everything was dry as a bone. The entire castle was rapidly an inferno. According to a firsthand account by one of the Saracen assailants, the Templar commander, realizing all was lost, threw himself into the flames. (Barber, p. 13.)

When the fire finally died out, the Saracens rushed in. They killed or captured anyone still alive, and seized important booty, namely weapons, armor and horses. According to the Arab sources, the Christian corpses were thrown into the well putrefying it ― to their own regret as soon “as a consequence of the extreme heat and the stench of the cadavers” no less than ten emirs and hundreds (if not thousands) of common Saracen soldiers died of disease (Barber, p. 15). Of the 700 Christians who had been at Chastellet when the siege began some slaughtered immediately, but “the greater part were massacred en route by the volunteer troops.” (Barber. P. 13).  The survivors ended in the slave markets of Damascus.

Given the Templar ethos of preferring martyrdom to surrender, it is highly unlikely that any of those survivors were Templars.