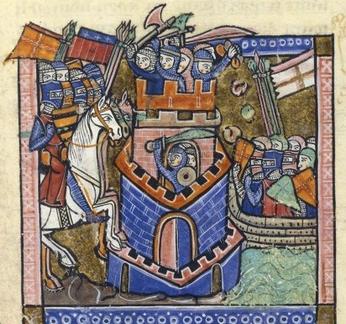 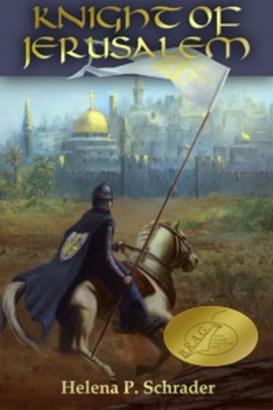 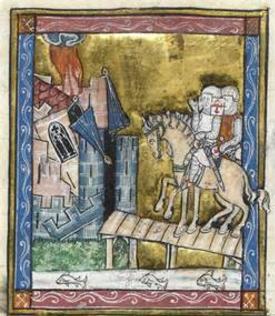 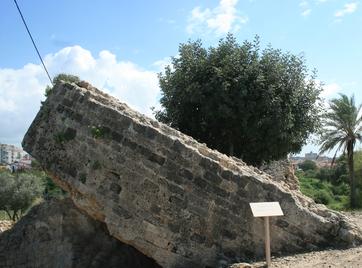 The Knights Templar at the Siege of Ascalon 1153

A breach in the walls --

here a scene from "The Kingdom of Heaven."

The city of Ascalon had remained a bastion of Islam inside the Kingdom of Jerusalem throughtout the first half century of the Kingdom's existence. Allegedly, called "the Virgin of the Desert" because it remained "inviolate since the days of the First Crusade." (Howarth, p. 109) It was garrisoned by troops from the Fatimid Caliphate based in Cairo, and maintained an aggressive posture toward the crusader kingdom throughout this period. Not content with being an island of Islam in a Christian sea, the garrison had frequently sallied out to harass the surrounding countryside and sometimes raiding deep into the kingdom.

The raids were so threatening that King Fulk (1131-1143) decided it was necessary to build a ring of castles around Ascalon, from which troops could respond rapidly to repell the raids. These were the castles of Ibelin in the north, Blanchegard in the northeast, Beth Gibelin in the southeast and Gaza in the south. Of these, the castle at Gaza was the most important as it stood between Ascalon and reinforcements from Egypt by land. The castle of Beth Gibelin was held by the Hospitallers, and in 1149 Gaza was turned over to the Knights Templar. According to Barber, it was the first major castle in the Kingdom of Jerusalem that was turned over to the Templars. (Barber, p. 73.)

The Egyptian garrison in Ascalon recognized the danger at once. They undertook a major offensive against Gaza in 1150, hoping to re-open their lines of communication with Egypt. They were repulsed with such heavy losses that the garrison was significantly weakened.  Furthermore, the Egyptians completely abandoned efforts to reinforce or supply the garrison by land, and the enclave at Ascalon became completely depended on support brought by sea.

This situation combined with internal turmoil in the Fatimid Caliphate became a temptation too great to resist. In January, Baldwin III declared his intention to capture Ascalon, and he assembled a large army which included large contingents of both Templars and Hospitallers, both commanded by their Grand Masters, Bernard de Tremelay and Raymond du Puy respectively.

Ascalon itself had a history dating back to 5000 years before Christ. It had been Canaanites and Philistine and Phoenecian.  It had been occupied by the Greeks, the Romans and the Byzantines before the Arabs came. It lay across the vital trade routes between Egypt and Syria. It was built like large semi-circle, the coast forming a straight line that stretched through the diameter of the circle and the walls forming the circumference.  These walls were massive. They had Byzantine foundations that had been repaired and extended by the Egyptians.

The forces of Jerusalem first blockaded the port, ensuring there was no relief for the garrison and then commenced a siege. The city had been well stocked and resisted all assaults valiantly and effectively.  In June an Egyptian fleet even managed to slip through the blockade bringing some supplies to the beleaguered garrison. The forces of Jerusalem had meanwhile been reinforced by the spring pilgrims, many of whom were fighting men and anxious to take part in the struggle.

The Kingdom of Jerusalem had from the start deployed as many siege engines as they could muster and continually hammered the walls of Ascalon throughout the siege.  They also employed a large, mobile assault tower that ranged higher than the walls. On the night of August 15, the defenders succeeded in setting fire to this tower. As the inferno raged, the wind suddenly shifted, blowing the burning engine and the flames back toward the city of Ascalon. The stones first expanded under the intense heat, and as they cooled they cracked and began to collapse. According to the contemporary chronicler, William Archbishop of Tyre, the collapse of the wall woke the entire army, and men rushed to dress and arm themselves to take advantage of this opportunity.

The Templars held the sector of the encirclement immediately opposite the breach in the wall and reached it first. Led by their Grand Master forty Templar Knights rushed through the breech only to soon be overwhelmed. Before the Templars could be reinforced, the defenders of Ascalon had pushed stones and rubble into the breach and reinforced it with sufficient troops to hold it. The following morning, the bodies of the dead Templars, including that of Grand Master de Tremelay, were hung headless and naked from the walls of Ascalon.

Unfortunately for the reputation of the Templars, William of Tyre claims in his account of the siege that: "It is said that [the Templars] prevented the others from approaching for this reason, that the first to enter obtain the greater spoils and the more valuable booty." (Tyre, quoted in Barber, p. 74.)  However, Tyre himself was not in the Holy Land at this time and was relying on second hand accounts from other participants. Certainly, he had spoken to no witness who could tell him what the Templar intentions had been since the Templar participants were all dead.  It hardly seems plausible that the Templars seriously  expected to defeat the entire garrison and capture the city with just 40 knights. It seems much more plausible (at least to me) that men who had arrived too late to reinforce the Templars tried to shift the blame for the disaster away from themselves. In short, this was nothing but a flimsy excuse: "we came but the Templars wouldn't let us in." Notably, the Arab sources that describe the siege in detail, including the burning of the siege engine and the ensuing breach of the wall, make no mention of the Templars at all.

Given the Templar ethos and their ferocious defense of their independence, it is quite probable that the Templars were guilty of nothing more culpable than excessive zeal. Instead of waiting for reinforcements or making an effort to coordinate their attack with the other components of the besieging army, they rushed into the breach at once. By the time other Frankish troops arrived, it was too late; the breach was fiercely defended -- not by the Templars but by the Muslim garrison of Ascalon.

Yet it is telling that Tyre was willing to believe and repeat this accusation of greed.  It shows that as early as the late 12th century, the Templars had acquired a reputation for avarice. Furthermore, with such an authority as Tyre crediting the Templar Grand Master with seeking nothing but plunder, naturally most modern historians follow this interpretation blindly.

Less than a week later, on August 22, 1153, the garrison of Ascalon sought surrender terms. The King of Jerusalem readily granted them their lives and the right to take all their movable goods with them. The garrison of Ascalon received a safe-conduct to Egypt, which was scrupulously respected.  It was after crossing into Muslim held territory that many of the garrison were attacked, robbed and/or enslaved by Bedouins.

Ascalon was re-settled with a predominantly Christian population, and played a key role in the history of the Kingdom of Jerusalem. It was the city from which Baldwin IV sallied forth to end Saladin's invasion of 1177 at the Battle of Montgisard, and, after falling to Saladin in 1187, it was a particular bone of contention between Saladin and King Richard of England in the Third Crusade. It was briefly re-integrated into the Kingdom of Jerusalem between 1239-1247.

Sources for this article: 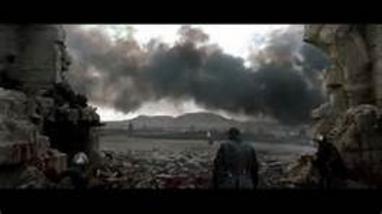 Ascalon is the setting of much of Knight of Jerusalem, a novel set in late 12th Century Jerusalem, and the first book in my Jerusalem Trilogy, a three-part biography of  Balian d'Ibelin.