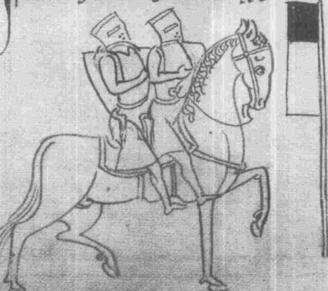 It was not until nearly two decades after the successful end of the First Crusade in 1118 that a handful of knights sought out the Patriarch of Jerusalem with an unusual request. These men wanted to take vows of poverty, chastity and obedience in exchange for devoting themselves to the service of God in an exceptional way.  Rather than withdrawing from the world and living a monastic life, they proposed (or according to Malcolm Barber, p. 7, accepted a proposal) to serve God by protecting unarmed pilgrims at risk of attack by robbers and Saracens while visiting the holy sites. The King of Jerusalem, welcomed this endeavor and agreed to give them space inside his palace, which was then located on the Temple Mount in Jerusalem, in what was then thought to be the site of King Solomon’s Temple and residence. It was from this building that the Templars drew their name “the Poor Knights of the Temple of Solomon in Jerusalem.”  They were at this time so poor that they wore only cast-off clothing donated by the pious, and allegedly did not have enough horses to go around, resulting in their early seal showing two knights on a single horse.

However, founding members had powerful and wealthy relatives and connections. More important the attracted some powerful early recruits, notably Hugh, Count of Champagne, who joined the nascent order in 1125. Other nobles, not willing or able to take vows of chastity and poverty, showed their veneration for what the Poor Knights were trying to do by leaving land or revenues to them. Yet arguably their greatest asset in the first two decades after their founding was ties through one of their founding members, Hugh of Payns, to St. Bernard of Clairvaux ― the most influential churchman of the early 12th century.

It was not until 1129, however, that at the Council of Troyes that the “Poor Knights” received a monastic code, a “Rule” by which they were to live, and Papal sanction for their now official, religious order.  The Rule was drafted by none other St. Bernard and based on the Rule of the Cistercians, but differing as necessary to allow the knights to look after their armor, horses, and operate on highways rather than living in the seclusion of a monastery.  In fact, the exact wording of the Rule was developed in a large committee that included several of the knights themselves.  It was at this time that the Poor Knights (who were increasingly rich as an Order, although poor as individuals) adopted white robes and surcoats as their habit.  The exclusive right to wear a red cross patée on their shoulders and/or breast was granted 17 years later in 1147.

Yet despite their success with gaining recognition, property and recruits, the Knights Templar (as they increasingly came to be called) had not yet emerged as a significant military establishment nor proven their worth in battle. It was the Second Crusade that gave them that opportunity.

The loss of the County of Edessa to the powerful Selkjuk leader Zengi in 1144 shocked Western Europe and triggered a call for a new crusade. Pope Eugenius made the official appeal, while St. Bernard became the most passionate, articulate and effective preacher of this new crusade. Although St. Bernard succeeded in recruiting the German King, Conrad of Hohenstaufen, from the start the driving force behind this crusade was the young French King, Louis VII. Louis had in childhood been destined for the Church and only became heir to the crown of France after his elder brother’s death. Throughout his life, he was noted for his great piety, and the crusade appealed to him greatly.  After an impassioned speech by St. Bernard at Vézélay on Palm Sunday 1147, enough nobles (including the Duchess of Aquitaine, wife of King Louis) had been recruited to make the crusade viable.

From the start, however, the crusade suffered from poor coordination. The German crusaders set off ahead of the French and proceeded in such an undisciplined fashion across the Western territories of the Byzantine Empire that it came to many armed clashes with Imperial troops.  The French followed a month behind the Germans and although more disciplined, they now encountered inhabitants burned by the behavior of the Germans who were hostile ― which meant reluctant to sell food and other necessities. The situation was critical and King Louis sent envoys to the Greek Emperor to negotiate for market privileges in exchange for an orderly passage of the crusaders through Byzantine territory.

One of Louis’ envoys was the Master of the Temple in France (not to be confused with the Grand Master.) This was a certain Everard de Barres, already a close confidante of King Louis, and commander of 130 Templar Knights and probably equal numbers of sergeants and support elements for a total of about 300 Templars. These Templars were presumably all recent recruits from France, but they had had time to undergo training and indoctrination. From the start of the Second Crusade, they appear to have assumed their now traditional role of protecting pilgrims ― in this case armed pilgrims and their very large baggage train including the Queen of France and many other ladies.

After crossing the Bosporus in late October, the French crusaders received alarming reports of the destruction of the German crusader ― rumors that soon proved all too true. The German has been all but annihilated near Dorylaeum (the site of a great crusader victory in the First Crusade).  Allegedly only one in five of the German crusaders escaped the slaughter. Conrad von Hohenstaufen preferred to blame “betrayal” by the Greeks rather than take responsibility for his own poor leadership and failure to send out scouts. It was the message of “betrayal” that he gave King Louis.

Although the remnants of the Germans now joined the French, Conrad himself soon fell ill and returned by ship to Constantinople.  The French continued more cautiously along the coastal road.  Two days beyond Laodicea the road led through a steep pass over Mt. Cadmus.  The vanguard was ordered to camp at the top of the pass to give the rest of the army time to catch up, but the commander (a vassal of the Queen of France rather than her husband) ignored the orders and continued over the pass allowing a large gap between units to develop. The Turks, who had been shadowing the army all along, immediately took advantage of the situation and fell upon the main and rear divisions, still struggling up the slope.  King Louis was unhorsed early on and too refuge either among the rocks or up a tree (depending on account). In the ensuing slaughter and chaos, the Templars distinguished themselves as the only disciplined fighting force capable of delivering counter-blows. When darkness fell, the Turks had been driven back, but not before the crusaders had suffered severe losses, particularly to the horses and baggage train.

Shaken by his experience, King Louis effectively turned the command of his entire army over to the Templars!  Everard de Barres organized the crusader force into units of 50, each under the command of a single Templar.  The Templars established an order of march and insisted that it be maintained. They also gave orders for the infantry to protect the horse during attacks and that ensured that no counter attacks were undertaken until ordered and properly coordinated and led.  These were simple things, but they had evidently not been instituted prior the Templars taking command ― in sharp contrast to the highly disciplined army of Richard the Lionheart half a century later.

Yet discipline is not substitute for food and fodder. The Turks employed a form of “scorched earth” policy to deny the advancing crusaders both.  Soon the crusaders were eating their horses ― except for the Templars, who had husbanded their supplies and could still feed both themselves and their mounts. This enabled the Templars to disguise the weakness of the entire force ― and beat off four more attacks by the Turks before the crusaders finally reached the Byzantine controlled port of Adalia. (Howarth, p.88)

Here King Louis VII ignominiously (and unlike his descendant and namesake King Louis IX) promptly abandoned his army, and took ship for Antioch with his wife and his leading nobles. The common crusaders were left to die of plague and hunger or sell themselves into Turkish slavery in order to survive.

King Louis arrived in Antioch in March 1148 with none of his infantry and in desperate need of money. The Templars were now to prove their value in the second field of endeavor or which they were to become famous (or infamous, depending on your point of view): as bankers.  Everard des Barres sailed from Antioch to Acre and there managed to raise loans by mortgaging Templar properties. The sums raised were enormous, as King Louis’ instructions to his ministers in France to repay the Templars document that they amounted to nearly half the annual revenues of the King of France at this time. (Barber, p. 68)

The rest of the Second Crusade was equally disastrous. At Acre on June 24, 1148 a joint decision was taken by the leaders of the crusade including Conrad of Hohenstaufen (who had sailed from Constantinople directly to the Holy Land and joined the crusader council), King Louis and King Baldwin of Jerusalem to attack Damascus. The choice seems odd since the Sultan of Damascus at this time had been comparatively friendly and was a joint enemy of Zengi’s successor Nur ad-Din. Although the Masters of both the Temple and the Hospital were present at this war council, their opinions are not known, and their voices were not yet powerful enough to be decisive.

Initial assaults on Damascus from the East/South were thwarted because the city was here surrounded by gardens and orchards with irrigation ditches that prevented the use of mass cavalry charges but provided archers with effective cover. The decision was therefore taken collectively to move the besieging army to the east where there were no such gardens and orchards ― but where there was also a dearth of water. Thereafter, the entire crusade broke down into bickering and recriminations while the crusading army disintegrated ― destroying the reputations of King Louis and Conrad of Hohenstaufen both.

The failure of the Second Crusade had serious repercussions.  It proved that “Frankish” knights were not invulnerable and Frankish armies not invincible. This greatly bolstered confidence among the Turks. In Western Europe it proved that God was not always on the side of the crusaders.  But since God had to be on their side, the search for scape goats was on at once.  The most obvious scapegoat was the Greeks. Both Conrad and Louis felt they had been “betrayed” ― misled at best or intentionally led into ambushes at worst. Another scapegoat were the “Poulains” ― the barons and lords of the Kingdom of Jerusalem ― who seemed to the crusaders too ready and willing to make truces with their Saracen foes.

Yet as Barber points out it is ominous that one German chronicler pinned the blame for the disaster at Damascus on the Templars. The Templars, he claimed, had accepted a massive bribe from the Saracens to give secret aid to the besieged (Barber, p. 69). It is notable that this allegation came only from German sources and not from French. King Louis returned to France full of praise for the Templars, and their reputation there continued to grow.  The Templars never really put down strong roots in the German speaking world and within half a century, the Germans would found their own Order, the Deutsche Ritter Orden. Yet it would be a French king who destroyed the Templars.

The Knights Templar Prove their Mettle: The Second Crusade