A Review of Knight of Jerusalem by Dr. Andrew Lathamon

Knight of Jerusalem is an historical biography set in the Holy Land in the fateful decades before the Battle of the Horns of Hattin (1187). It is the latest work of historical fiction from Helena Schrader, who has published novels such as St. Louis’ Knight, The Disinherited and The English Templar and who maintains the wonderful blog Defending the Crusader Kingdoms (http://defendingcrusaderkingdoms.blogspot.com/).

The plot revolves around Balian d’Ibelin, third son of Barisan d’Ibelin, an adventurer from Western Europe, who rose in the mid-twelfth century to become Constable of Jaffa and later a baron in the Kingdom of Jerusalem. It traces the rise of the younger d’Ibelin from an obscure and landless knight in 1171 to one of the heroes of the Battle of Montgisard in 1177 to landed and fabulously wealthy baron in his own right and member of the royal family by marriage by 1178. In the course of this meteoric rise, it chronicles Balian’s martial exploits, his diplomatic successes, his romantic entanglement with the Dowager Queen of Jerusalem, and his evolving friendship the leper king, Baldwin IV.

This could easily have been a novel as bad in its own way as Ridley Scott’s stylish but ultimately fatuous film The Kingdom of Heaven. Faced with the inevitable trade-offs between historical accuracy and dramatic license, Scott’s film almost invariably opted for the latter, twisting and wrenching characters and events to fit a story that in the end was faithful neither to the historical facts nor the deeper historical truths regarding the world inhabited by those like Balian d’Ibelin in twelfth century Outremer. Happily for those of us who like our historical fiction to be faithful to history while still telling a cracking tale, Helena Schrader has struck an altogether different balance. To be sure, she does take some dramatic license. Her version of the story of Balian’s rise, for example, hinges largely on his close relationship with King Baldwin, despite the fact that there is no direct historical evidence that such a relationship ever existed. When she does so, however, it is for all the right reasons: because there are gaps in the historical record that she can flesh out without interfering with recorded history; because there are hints in the historical record that she can build upon; or because doing so enhances dramatic punch without unduly distorting the historical truth. In the end, Helena herself puts it best in her Historical Note: “Given these gaps and contradictions, this novel has opted for a lucid story line that is not inconsistent with key known facts and in no way violates the historical record, but condenses or simplifies some events to make the story more coherent and dramatically effective.” That she is an historian as well as a novelist probably has much to do with the fact that ultimately she strikes a much more appealing balance between history and drama than either Scott’s film or many other fictionalizations of historical events or characters circulating in the popular culture.

Lest I have left you with the wrong impression, though, I want to be clear: Knight of Jerusalem is not simply an academic work of history dressed up as fiction – it is a well-plotted, tightly written tale that vividly depicts the life and times of an intrinsically interesting historical figure. The characterization is well done, particularly in the case of the protagonist, but also notably in connection with some of the minor characters. The prose is smooth, the dialogue believable, the attention to historical detail (especially around matters equine) flawless, and both the martial and marital dimensions of the story are convincingly developed (which is not always the case in historical fiction). Finally, I like to think of myself as fairly knowledgeable on the subject of the Third Crusade and the decades leading up to it, but the breadth and depth of Helena’s grasp of this era leaves me in awe. As far as I can tell, the story is marred by not a single mistake related to the complex and interwoven genealogies that are both an important element of this story and of life among the nobility Outremer.

Any downsides? Not really. The only misstep, and it is so minor a misstep that I hesitate even to mention it, is the use of the diminutive Barry to refer to Baldwin d’Ibelin. I understand why Helena has done this – to differentiate that Baldwin from King Baldwin. Still, I think restricting herself to the use of the name Barisan (which she also uses in connection with Baldwin d’Ibelin) would have been a better move.

At the end of the day, though, this is a truly minor quibble. Knight of Jerusalem is an entertaining and well-written tale that kept me engaged even in the midst of a busy university semester when I had plenty of non-fiction reading to do to stay ahead of my students. If you’re in the market for a thoroughly enjoyable work of historical fiction, I enthusiastically recommend this wonderful book.

Read more reviews of Knight of Jerusalem on amazon.com.

Buy Paperback on Barnes and Noble

Balian, the landless son of a local baron, goes to Jerusalem to seek his fortune, but instead finds himself serving the young prince suffering from leprosy. It is an apparent sentence to obscurity and death — until the unexpected death of King Amalric makes the leper boy King of Jerusalem. Meanwhile the charismatic Kurdish leader Saladin has united the forces of Islam and has vowed to drive the Christians into the sea. 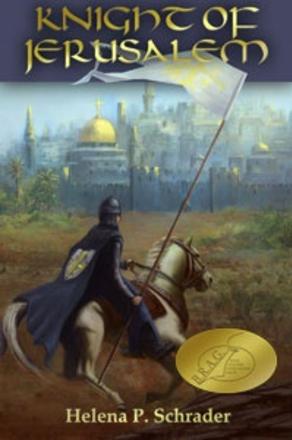