Another area in which the crusader states benefited from being at the cross-roads of civilizations was with respect to medical care. This was not as simple as having access to Arab medical knowledge, since both Western and Arab medicine of this period was based on false premises. Rather, it was the exposure to medical practices from the Eastern Roman Empire, India, Persia, Arabia, Egypt and the West that gave medicine in the Levant a degree of sophistication and flexibility unknown elsewhere at this time. Before looking at medical practices, however, I want to first consider one of the greatest innovations of Outremer: the hospital.

At the time of the First Crusade, Western Europe did not know hospitals in the sense of places where acutely ill patients received professional medical treatment. There were, of course, infirmaries in monasteries and convents to treat the sick members of the community, but they were not established for the benefit of the general public. Furthermore, the infirmerer and his assistants were first and foremost monks/nuns, not trained doctors/nurses. There were also alms houses for the infirm and aging, hospices for the dying, and various forms of charitable institutions to look after the chronically and incurably ill such as lepers, the blind, and the seriously disabled. In general, however, if the rich got sick, they sent for a physician to treat them in their homes; if the poor got sick they treated themselves or sought the services of a barber or other informally trained medical practitioner.

Another feature of 1th century Western medicine was that all care was centered around religious institutions, and even in those cases where wealthy secular benefactors had taken the initiative to found or endow a house for the poor/sick/aged/blind/leprous etc, care was almost invariably provided by members of the clergy (secular or monastic).  In addition, an important component of the “treatment” was hearing Mass and saying prayers regularly. While men and women patients were separated by a partition or by being housed on separate floors, there was little attempt to separate patients based on type of illness at this time.

The Byzantine tradition was quite different. Although, as in the West, care of the sick had initially been provided at monasteries, already by the 7th century AD most hospitals were both financially independent and employed paid, professional staff rather than relying on members of a monastic institution to provide the care and treatment of patients. Most Byzantine hospitals were small to modest in size, ranging from ten to a hundred beds, although there were larger hospitals which boasted a large and highly specialized staff. In the most prestigious hospitals in Constantinople, for example, physicians and surgeons (some of these further specialized by the type of operations they predominantly performed such as hernias, appendices, eyes etc.), pharmacists, attendants (nurses), instrument sharpeners, priests, cooks, and latrine cleaners are all listed on the payroll. The administration of these institutions was in the hands of the senior medical staff, and the patients were divided up into wards based on both sex and medical condition. Notably, there is documentary evidence of a small number of female doctors as well as female nurses for the women’s wards.

Equally important, the medical staff worked in the hospitals for very small salaries, but only for six months of a year; presumably they earned the bulk of their income from private practice in the alternating months in which they did not work in the hospital. This suggests that Byzantine hospitals, although no longer run by the Church, were nevertheless viewed as charitable places accessible to the middle and poorer classes. Furthermore, the most junior doctors earned no salary at all since they were considered apprentices in their craft (the equivalent of modern interns). In the larger hospitals, however, there were libraries and teaching staff, making these the equivalent of modern “teaching hospitals.”

In the Muslim world, in contrast, there is no evidence of hospitals until the end of the eighth century. Furthermore, the idea of an institution dedicated to healing the sick appears to have been inspired by contact with the Eastern Roman Empire following the conquest of Syria and the Levant. It soon became a matter of prestige, however, for Muslim rulers to establish and endow hospitals, so that by the twelfth century most major cities in the Middle East boasted at least one and often more hospitals. The staff of these hospitals were all paid medical professionals and they could be drawn from any faith, so that the doctors could be Muslim, Christian or Jewish. Although nursing staff for the women’s wards was female, doctors were invariably male. The famous Adudi hospital in Baghdad (and presumably other hospitals) was also a training institution with library and a staff that wrote medical texts as well.

The administration of most hospitals in the Muslim world, however, was in the hands of a bureaucrat appointed by the ruler; in short, even in the age of the crusades these hospitals were “public” in the sense of being state-run. The salaries were small, and again the doctors worked only half time (in the Muslim world, half-days rather than alternating months) in the hospital in order to be free to earn “real” money with private patients. (This practice is still common in Egypt today, by the way.) Hospitals in the Muslim world were large, often having several thousand beds. Perhaps because of this, it was also usual to divide patients up based on the diagnosis, so that there were separate wards for the mentally ill, people with fevers, stomach ailments, eye or skin conditions etc. Patients were also segregated by sex, of course.

Possibly due to the the nomadic past of both Arab and Turkish Muslims, the Muslim world appears to have been very progressive with respect to the establishment of mobile hospitals. These traveled with the Sultan’s armies as early as 942. They also provided care to outlying, rural areas not serviced by the large central hospitals in the urban centers of the Middle East.

With the establishment of the crusader states in the Levant following the First Crusade, pilgrims from across the Latin West started flooding into the Holy Land on pilgrimage. The journey, whether by land or sea, was arduous and fraught with dangers from pirates and highway robbers to unfamiliar foods, snakes, scorpions and accidents. Many pilgrims arrived in the Holy Land with injuries and/or in poor health. Being far from home, these pilgrims had no families, guilds or other networks of support; they needed assistance.

Their plight sparked the foundation of one of the most important religious orders of the Middle Ages: the Hospitallers or Knights of St. John. (See separate entry.) But not just the Hospitallers. Pilgrims were coming from across Europe and they spoke different languages; they needed care-takers who could understand them. In consequence, a number of early hospitals were established by monks speaking the same language as the pilgrims, but most of these were later absorbed into the Hospitaller’s network as the Knights of St. John became increasingly wealthy, powerful, and international.

A few, such as the establishments for lepers and the German hospital established during the siege of Acre in Third Crusade, evolved into independent orders. The leper hospitals were taken over by the Knights of St. Lazarus and German hospital became the Teutonic knights, to mention just two examples. Notably, all hospitals in the crusader states were run by religious/military orders; there were no secular hospitals in the Byzantine and Muslim tradition.

Furthermore, it is fair to say that the medical landscape of Outremer was dominated by the Hospitallers, and it is from this Order that we have the most complete information about care for the sick in the crusader period. The hospitals of the Knights of St. John retained many features of Western medical institutions, but adopted others from Byzantine and Muslim examples.

For example, being a religious order, the Hospitaller retained the Western emphasis on prayer as a means to recovery. The wards were usually situated to enable patients to hear Mass being read in an adjacent chapel or church.  Furthermore, patients were required to confess their sins on admittance to the hospital because it was believed that sin (and God’s displeasure) could cause illness. That said, eye witness accounts report that Muslims and Jews were also treated in the hospitals; we can only presume that they were exempt from confession at admittance.

Breaking with Western tradition, however, the hospitals run by the Knights of St. John employed professionally trained doctors and surgeons at least by the second half of the 12th century. There is at least one case of Jewish doctor being employed and taking the oath required of all doctors on the “Jewish book” rather than the bible. In contrast to both Byzantium and the Muslim world, the doctors of the Order of St. John were well-paid and worked full-time in the hospitals. The attendants or care-givers on the other hand were brothers and sisters of the Order of St. John, i.e. monks and nuns and as such neither salaried nor professionally trained, although they would certainly have rapidly gained extensive on-the-job training. The male care-givers are listed as “sergeants” in the records of the Order. The Rule of the Order of St. John required the nursing staff (male and female) "serve the sick with enthusiasm and devotion as if they were their Lords.”

Following the Muslim more than the Byzantine tradition, the Hospitallers maintained very large establishments in major cities such as Jerusalem, Nablus, and Acre. The Hospital in Jerusalem had more than 2,000 beds, for example, and was divided into eleven wards for men and an unknown number of wards for women. (Our source for this information were male patients reporting on the hospital, who did not have access to the women’s wards.) Patients appear to have been segregated not only by sex but by type of illness, although this may not have been possible at smaller institutions in more provincial towns. The larger hospitals, such as that in Jerusalem, Nablus and Acre, are described as very well appointed by eye witnesses that stressed there was adequate room for beds and for personnel to move between patients, and adequate windows for fresh air and light. Archaeological evidence testifies to the Hospital in Jerusalem’s proximity to a major aqueduct and no less than five large cisterns providing ready water, while a network of drains made it possible to flush out refuse and human waste.

Diet formed an important part of the treatment in Hospitaller establishments, possibly because so many of the patients were pilgrims suffering more from malnutrition than disease. Food poisoning and various forms of dietary problems were likewise common. Furthermore, medieval medicine was based on the premise that illness resulted from an imbalance between the “humors” (e.g. blood, bile). Certain foods, notably lentils, beans and cheese, were completely prohibited in the hospitals of St. John, but white bread, meat, and wine were daily fare. Patients also benefited from the wide variety of fruits available in the Holy Land: pomegranates, figs, grapes, plums, pears and apples are all mentioned.

The Hospitallers were able to provide such extensive and professional care to large numbers of patients because of the enormous endowments left to them ― often from former patients. Grants were also made in kind, for example, obligating a town or distant estate to provide set quantities of, say, sugar cane (used in medicines), almonds, or linen sheets on an annual or more frequent basis. 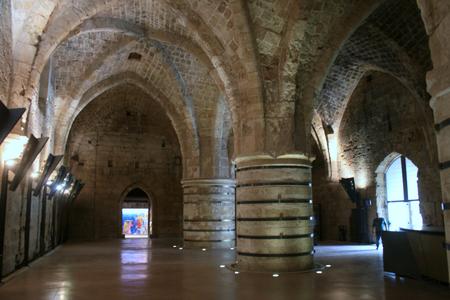 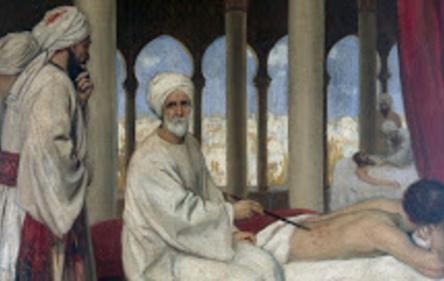 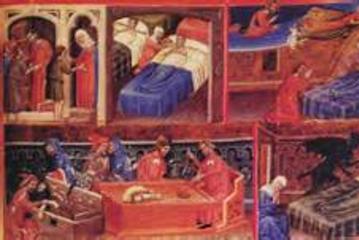 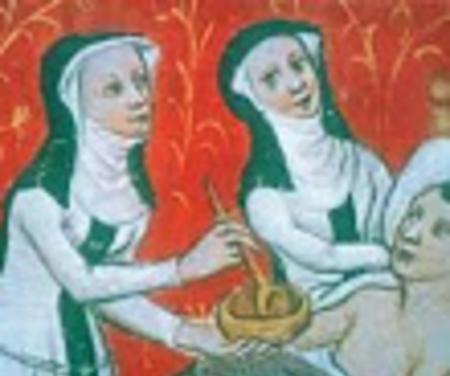 Hospitals in the Holy Land 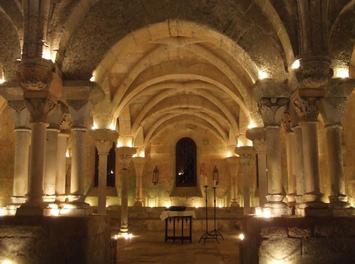