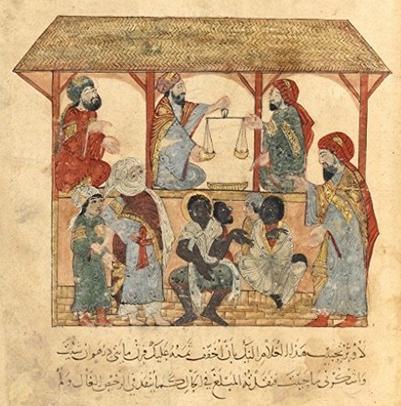 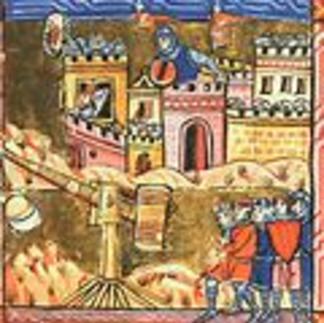 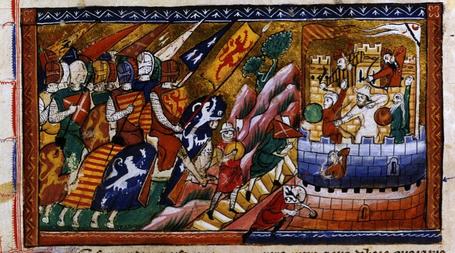 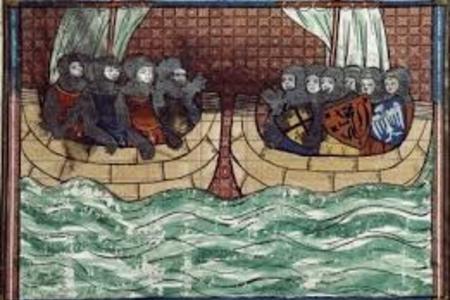 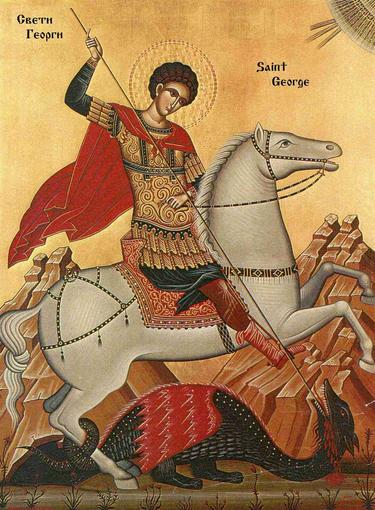 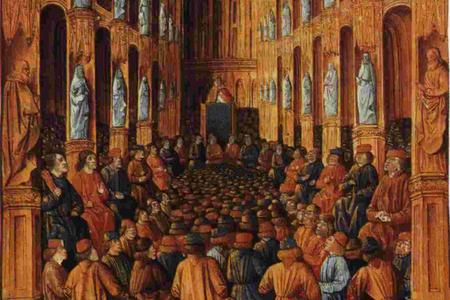 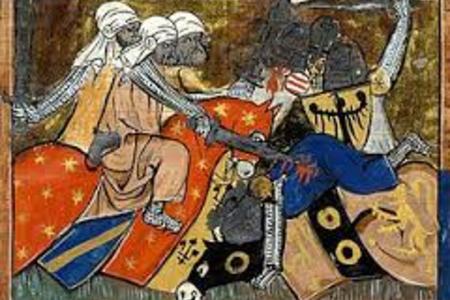 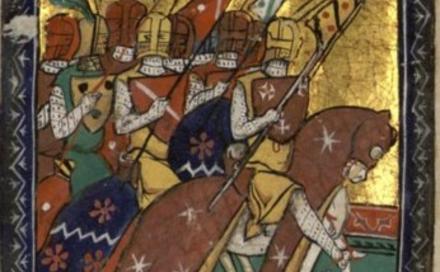 Genesis of the Crusades

The Crusader States were founded in the wake of the First Crusade, so an understanding of the crusades and their genesis is essential to any study of the crusader kingdoms.

Essentially, the Crusades were a series of campaigns undertaken by Christians in the 11th to 13th centuries to establish (or re-establish) control over the Holy Land (the sites of Christ’s passion), particularly Jerusalem. These campaigns were a response to the expansion of Islam, which had spread in the wake of invading armies that used the sword to impose Islam on previously Christian territory. Most – but not all – crusades were fundamentally defensive campaigns that responded to aggression with aggression.

The successful First Crusade established a string of Christian states in the Holy Land that, although prosperous, were always threatened by the overwhelming military superiority of the surrounding Muslim states. Whenever one or more of these states was invaded or fell to the Saracens (because the opposing Muslim forces were ethnically Egyptian, Syrian, Kurdish or Turkish, I will use the contemporary term “Saracen” to refer to these diverse but consistently Muslim fighting groups), the call went out to the West for aid – for a new crusade. Thus in the course of two centuries, a total of eight numbered crusades were launched, not counting the Reconquista (liberation) of the Iberian Peninsula, or the wars against the heathens of northeastern Europe and the heretics of Southern France, which were sometimes also referred to as crusades.

In the course of these crusades, Christian leaders and troops committed many atrocities that are incompatible with Christianity, but not all crusaders were inherently depraved and brutal. Furthermore, the enemy also committed countless well-documented atrocities. These were violent centuries, but they were also a period in which the close contact between the East and the West produced cross-fertilization of culture and art, and a period in which trade and science flourished.

Below is a short chronology of the events leading up to the First Crusade:

Within the first fifteen years after the fall of Jerusalem to the Caliph Omar in 628, Syria, Persia, Anatolia, Egypt and Libya  all fell to the armies of Islam. These loses crippled the economy of the Eastern Roman Empire, and in 655 the Byzantine navy was also effectively destroyed in a major engagement that left Constantinople incapable of providing support to the far-flung outposts of the Eastern Empire.

The following year, however, the Shia-Sunni split led to the first civil war within the Dar al-Islam (the House of Islam) lasting from 656-661. At roughly the same time, Arab invaders encountered serious resistance from the Berbers in North Africa.

By 678, however, the forces of Islam were again so powerful that they launched an assault on Constantinople itself. The Byzantines fought off the assault with the aid of their massive walls and the use of a new weapon which became known as "Greek fire" - a napalm-based substance that was delivered in pottery vessels that broke on impact resulting in fires that could not be extinguished by water. The attacking Arabs suffered such severe losses that they agreed to a thirty year truce in the wake of defeat. Constantinople was temporarily saved, but the Eastern Roman Empire was in no position to defend its remaining Mediterranean territories, much less undertake an offensive to regain what had been lost. In 698, the mighty (Christian) city of Carthage fell to the advancing Muslim forces and by 700 Islam was ready to turn its violent tactics of "conversion" on Western Europe.

Attacks on Sicily and Sardinia are recorded as early as 704 and Corsica fell in 713. More important, of course, the invasion of the Iberian peninsula began in 711. By 720 the Muslims had forced the Christian defenders into the mountains of the northwest and, dismissing them as a no longer viable fighting force, crossed the Pyrenees to start subjecting the land of the Franks.

In 732, outside of Tours, a Frankish army decisively defeated the invading Muslims in a desperate defensive battle. The Franks furthermore continued fighting the invaders, finally driving them back across the Pyrenees a generation later in 769. By 795 Charlemange had taken his forces over the Pyranees to assist the Spanish Christians in regaining their territories as well. The Reconquista had begun. In short, in the 8th century Western Christians joined Eastern Christians in opposing the brutal invasions conducted against them in the name of Islam.

Meanwhile, Constantinople as still fighting for its very survival. In 717 a new Muslim force by land and sea appeared outside of Constantinople and a year-long siege ensued. After a desperate fight, the capital of the Eastern Roman Empire fought off the besiegers, but it remained mired in a struggle for survival. There could be no thought of freeing something as distant as Jerusalem when Anatolia was constantly raided and plundered. It was not until 740 that the Byzantine victory at Acroinon provided the Eastern Roman Empire with a degree of security in the Anatolian heartland.

The Byzantine victory at Acroinon notably coincided with a general decline in the power and strength of the Umayyad dynasty, which was also beset with problems on its eastern frontiers. This allowed the Eastern Roman Empire to at last start a "reconquista" of its own. In 746, Constantinople regained control of Syria and Armenia, but already by 781 the Byzantines were again on the defensive. For the next half century, the Byzantine Empire was locked in yet another bitter struggle in Anatolia.

Meanwhile Arab rule of the conquered Christian territories from Syria to Spain was characterized by brutality, oppression and humiliation for their majority Christian subjects.  (See The Myth of the Andalusian Paradise.) The small Arab elite ruled initially over populations that were overwhelmingly Christian. Due to the burdensome taxes, humiliations and oppression, however, more and more people chose to abandon their faith for the sake of economic gain. Yet conversion is a far slower process than invasion and occupation. To this day, even after 1,400 years of Muslim rule, there are significant Christian minorities in Syria, Lebanon, and Egypt. Historians estimate that after four hundred years of occupation the inhabitants of formerly Christian territories was still roughly half Christian.

The plight of the oppressed Christians population (whether majority or large minority) remained, therefore a motivation for the recovery of lost territory and by the mid-9th century, the Eastern Roman Empire had recovered sufficient strength to launch a sustained "reconquista." In 853 Constantinople sent a fleet to attack Damietta in the Nile Delta. Thereafter, despite some setbacks, the Byzantines continued to regain lost territory right through the middle of the next century. In 943 they liberated Mesopotamia with its overwhelmingly Christian Armenian population. In 961 they recovered Crete and in 965 Cyprus. In 969 Antioch was at last freed from Muslim rule and Aleppo offered tribute to Constantinople to avoid a similar fate.

The recovery of Jerusalem now seemed possible, and Constantinople was determined to regain this most sacred of all Christian cities. A series of campaigns were launched that systematically recovered the coast of the Levant including Beirut, Sidon, Tiberias and Nazareth. Acre and even Caesarea were returned to the Eastern Empire, but Jerusalem remained just out of reach. As the tenth century came to a close, the Byzantines lost momentum and their attempt to regain their lost territories faltered.

What followed was the worst phase yet for subject Christians in Palestine. The new and powerful Shia Fatamid Caliphate pushed back their Sunni rivals and took control of Palestine, including Jerusalem. The Caliph al-Hakim, who ruled from 996-1021, persecuted Christians and Jews and destroyed what was left of the Church of the Holy Sepulcher.

In the West, however, the set-backs had started sooner. In 827 the Muslim conquest of Sicily commenced and although it would take until 902 to complete it would eventually be successful. Meanwhile, in 837 a Muslim army had landed on the Italian mainland, ironically at the request of the Duke of Napes who wanted help in his squabbles with his local enemies. Throughout the rest of the century, the various Italian cities remained divided among themselves and all too ready to accept Muslim assistance, which in turn opened the doorway to Muslim mercenaries sacking, pillaging and pirating from bases in Italy. In 846 Rome itself was attacked by a Muslim raiding force and the basilica of St. Peter was looted but not destroyed.

When three years later a larger Muslim fleet set out to attack Rome again, however, it was met by a combined Christian fleet that defeated it. What followed, however, was not peace but rather a long struggle for control of the Italian mainland. Indeed, the Muslims succeeded in establishing a base for raiding on the coast of Provence at La Garde-Freinet in about 888. While neither the raids from Italy or the base in Provence were comparable to the great Muslim conquests of the 7th century, they posed a menace to travel and trade and kept Western Christendom on the defense.

This did not end until 915 when an alliance of Roman and Byzantine forces drove the last Muslim strongholds off the Italian mainland. For a time, however, the Muslims continued to raid the Italian coastal cities. In 934/35 Genoa was sacked, its male population massacred and the women and children carried off into slavery. Pisa beat off attacks in 1004, 1011, and 1012. Four years later, Salerno came under siege and was only rescued by a band of Normans -- notably on an armed pilgrimage to Jerusalem.

It was only now, at the start of the 11th century, that the tide began to turn in favor of the Christians in the West. The Italian city states were gaining sufficient wealth to finance stronger defenses. In 1034, the Pisans launched an attack on Muslim North Africa. A generation later the Pisans again raided Muslim territory, this time Palermo in 1062 and 1063. Finally, in 1087, a combined force raised from Pisa, Genoa, Rome and Amalfi struck at the main base for many Muslim pirate attacks on Italian ships and cities: Mahdia in what is now Tunisia. The expedition was so successful that it enabled the victors to free prisoners, obtain huge reparations payments, and gain trading privileges. Most important, after the raid on Mahdia, Muslim attacks on Italy ceased almost entirely.

But just as the Western Christians were gaining strength again, the Eastern Roman Empire underwent a new crisis. The Seljuk Turks had converted to Islam and with the passion of the newly converted and the skills of nomadic warriors they set about establishing their domination over Syria and then turned on Armenia, Cilicia, and the Levant, driving the Byzantines out, before striking at Anatolia. The Byzantine Emperor Romanus IV Diogenes assembled his forces and rushed to the defense of this vital heartland -- only to be decisively defeated on August 26, 1071 at the Battle of Manzikert. Shortly afterwards the embattled Byzantines started sending appeals for help to the apparently now stronger West. That aid would, a quarter century later, materialize in the form of what we have come to call the First Crusade.