William, Archdeacon of Tyre, led Balian along the interior gallery toward the Jaffa Tower. The Archdeacon was not yet an old man, but he was no longer young, either; Balian had heard that he’d spent sixteen years studying in the West before returning to the city of his birth to serve the King. Balian judged he was roughly half a century old. He wore long ecclesiastical robes and soft doeskin slippers, so his feet were silent on the checkerboard of light and dark marble paving stones. “He is a very bright boy,” the Archdeacon told the young knight. “He is exceptionally quick to pick up on things, and he has a sharp analytic capability that often surprises me. More than once he has made observations that would honor a grown man. If it weren’t for his illness, I would rejoice that the Kingdom of Jerusalem had been blessed by such an intelligent boy as its heir.”

Balian nodded, and the Archdeacon looked at him sidelong. “You fear contagion,” he concluded.

“You should, for despite what the King says, the boy is almost certainly struck by leprosy. The King does not want to believe that, and as long as we can pretend it might be something else, we do. But in your shoes, I would assume it is leprosy. That said, the danger of contagion is far less than many people believe―especially under the circumstances. You see, the son of a king can afford what commoners cannot: to be bathed morning and night, and to have fresh bandages and fresh clothes each day. The bandages and clothes removed at night are boiled in large vats with salts that sterilize them. I personally wear cotton gloves when I am near Baldwin, and I change my gloves each day, sending the dirty gloves to be sterilized in the same way. I would strongly recommend you bathe nightly as well. I make no promises―after all, none of us know how Prince Baldwin became infected―but there is no reason to see this assignment as a death sentence.”

Balian glanced at the churchman with a wan smile. “Am I so easy to read?”

The Archdeacon laughed. “In this case, yes―but mostly because it is what everyone thinks. Only slaves attend Baldwin, because—I am ashamed to admit—none of the Christian servants were willing to take on the duties of looking after him.”

“The Prince of Jerusalem is surrounded by Muslim slaves?” Balian asked, shocked.

“And you and me,” the Archdeacon reminded him with a smile, but then he grew serious and halted. They were still a good ten paces from the entrance to the Prince’s suite of rooms, guarded by men-at-arms in the livery of Jerusalem. The Archdeacon lowered his voice and looked Balian in the eye. “You and I will be working closely together in the months, maybe even years, ahead. I wish to know more about you.”

“I am the third son of the first Baron d’Ibelin, the younger brother of Barisan de Ramla―”

The Archdeacon cut him off with a shake of his head. “I know who you were born, Sir Balian. I am not interested in your bloodlines and estate, but rather in your character. I would like to know why you accepted this position―since evidently you consider it a death sentence.”

“Would you feel more comfortable in a chapel?” the Archdeacon asked, leaning past Balian to open the doors to a room immediately off the gallery. It was hardly more than an oratory, really, with room for no more than two or three people to kneel before the altar. But Christ was here, the Eucharist candle hanging by silver chains above the altar. The Archdeacon closed the door behind them, and Balian was cornered. This was a confession, only facing the priest.

“There is nothing wrong with admitting you took this position for the rewards the King offered, for I’m sure he offered you something valuable,” the Archdeacon told Balian with a smile, as if trying to make this easier for him.

“No, I didn’t take it for rewards, since I question whether I will live long enough to collect,” Balian answered honestly.

“Then why did you take this position?”

Balian fixed his eyes on the Eucharist rather than the churchman. “Because I thought that if God had seen fit to make the Prince of Jerusalem a leper, then who was I to think I was too good to serve him?”

This answer took even the Archdeacon by surprise. In a spontaneous gesture that was very rare for the learned cleric, he embraced Balian and murmured, “My son!” Then, as if embarrassed by his own gesture, he stepped back and held Balian at arm’s length, looking him in the eye. “Do you know what the Byzantines call leprosy? They call it ‘the holy disease.’ You must understand: lepers are not punished for the blackness of their souls! You will understand that better when you meet Baldwin. Rather, leprosy is a sign of His grace. Lepers have been singled out to suffer as He did—and to give other Christian men an opportunity to demonstrate their faith through service to these poor souls. I see that you understand that, and I am certain the Lord has blessed you, young man. But remember, he who is blessed by the Lord is not guaranteed health or prosperity in this life, but surely in the next. He will be with you always!”

“May I do nothing to offend Him, my lord.” 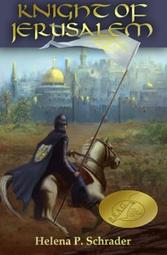 "To Serve a Leper" -- Excerpt from Knight of Jerusalem