If only jewels could make a woman happy, Maria Zoë Comnena thought as her ladies prepared her for yet another state dinner. Her great-uncle, the Byzantine Emperor Manuel I, had sent her as a bride to the King of Jerusalem, laden with jewels as a way to demonstrate his wealth.

Maria Zoë remembered all too vividly what it had been like when she arrived in Jerusalem at the age of thirteen. The marriage had been celebrated just two days after her arrival, before she had had any chance to recover from the arduous journey. Although she had been given French lessons to prepare her for her marriage to Jerusalem, at the time of her wedding she still needed to concentrate very hard to understand rapidly spoken French. She had been utterly exhausted, from the constant use of a strange tongue and from wearing the heavy, jewel-encrusted gown, long before her husband consummated the marriage.

The next morning she was presented to the court again, this time as a married woman, and she had been so tired she could hardly keep her eyes open―which sparked much jocularity and teasing, and the King had beamed with pride. Amalric had been proud of his little Byzantine bride. She was as pretty as a doll, with curly black hair, big amber eyes, a nubile white body, and the riches of Byzantium draped upon her.

That was five years ago. Now Amalric was also proud of her learning, particularly the fact that she could read and write in Greek, Latin, and French. The King had even been known to brag about the fact that she had read Aristotle and Plato. But such bragging was because he felt her learning, like her bloodlines and her beauty, reflected well on him. These things did not fundamentally alter his attitude towards her. Except in bed, he treated Maria Zoë with the greatest of courtesy, and her authority was never publicly undermined, but he never sought her advice or interacted with her on an intellectual level. She was his Queen, not his companion or friend.

As his Queen, he expected her to be immaculately dressed, coiffed, and made up whenever she appeared in public. This started with a daily bath in rose water, followed by skin creams. Her fingernails and toenails were manicured. Then she was dressed in silk undergarments, over which came silk gowns and surcoats embroidered with bright silk, gold, and silver threads. Last but not least, she was laden with jewels: hairpins with pearl or rolled amber heads, earrings that dangled almost to her shoulders, necklaces with multiple strands of gold or beads of precious stones, bracelets as wide as an archer’s leather brace, and rings on every finger. A Syrian Christian had been employed for the sole purpose of outlining her eyes, rouging her cheeks and lips, coloring her eyelids, and styling her hair, which was never entirely concealed under the sheer silk veils that she wore.

The result was dazzling to the observer, and utterly stifling to Maria Zoë. She could not move naturally in her clothing, nor sit comfortably, nor relax even for a moment. She was transformed into a doll, her thoughts and feelings completely buried behind the façade. 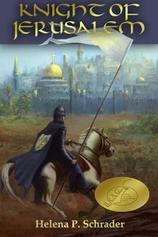