​Barry snorted. “And what about you? What are your plans now?”

“Don’t tell me you still have romantic notions about winning fame and fortune by great deeds?” he asked with contempt. Then he added condescendingly, “It’s time you grew up, Balian, and recognized that earning honor with great deeds is for the romances and the songs of troubadours, but not relevant in today’s world. Face it,” he continued: “nowadays kingdoms and baronies are inherited rather than won by the sword. Look what happened to Reynald de Châtillon when he tried to seize Cyprus by force.”

Barry laughed, and too late Balian realized his brother had been baiting him. “Even in our father’s day, winning a fortune by the sword took longer than the alternatives.”

When Balian refused to answer, Barry continued, “Your problem, Balian, is that you’re not acquisitive enough. You need to be greedier if you’re ever going to make something of yourself.”

“Greed is a deadly sin, Barry,” Balian answered, echoing what he had said to Henri only a few hours earlier, and adding before Barry could make any snide remarks, “I think I’ll go to Jerusalem as Hugh suggested.”

“Jerusalem,” Barisan countered, “is full of younger sons from every noble house in France, England, and the Holy Roman Empire. You don’t have a chance of standing out in that crowd. You should go to Antioch. Prince Bohemond is still young and hasn’t been in power very long. He will be in need of men to support him―and the competition isn’t as stiff in Antioch.”

Balian smiled crookedly. “Thank you for your faith in my abilities, Barry.”

“I’ll try my luck with Jerusalem.”

Barisan shrugged. “As you wish, but don’t come crawling to me if things don’t go according to plan.” 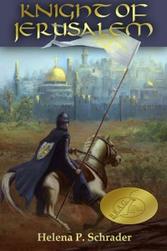 "A Landless Knight" Excerpt from Knight of Jerusalem