Fortunately, Centurion had been refreshed by the drink and the soothing coolness of the running water on his legs and belly. He responded with alacrity. Once he was out of the river and onto the firmer ground of the plain, Balian stood in the stirrups and leaned forward, urging him onwards. Soon the stallion was going flat out, leaping over the bodies of man and horse in a mad dash to rejoin the King’s forces.

On his right, Lusignan and his knights were also racing back to rejoin the King, while Tripoli took charge of the valuable prisoner and with a handful of his knights rode west for the coast.

The sound of the approaching Saracen charge became an increasing rumble. The Saracens could see their foe spread out and vulnerable before them—and could see Ibelin and Lusignan rushing to regroup. They, too, spurred their mounts forwards. Neither army had mustered infantry for what on the Muslim side had been a raid, and on the Christian side a counter-raid. Nor did Salah ad-Din appear to have the usual contingents of mounted archers; they had apparently been deployed with Farrukh-Shah. The Saracen horse thundering down toward the scattered Frankish forces were heavy cavalry armed with lance and sword. They shouted battle cries, the wind fluttered the pennants on their lance tips, and the sunlight caught on their raised swords. Centurion laid his ears flat back on his head as he raced, determined to escape the onslaught from his left.

But they weren’t going to make it. The enemy was advancing too fast.

They could not risk being run over from the side.

Ibelin flung out his left arm toward the enemy to indicate they had to turn into the attack. He could not take the time to look over his shoulder to see if his knights understood him. Instead, he reached forward and with his left hand took hold of the bridle directly behind the bit. Then he leaned with all his weight on his shield arm and pulled Centurion around—more by the strength of his will than his arm. He barely managed to sit back in the saddle before the lines of horses clashed.

Centurion was thrown on his haunches by the impact from the first lance, and Balian felt blows raining down on his shield, helmet, forearms, and thighs. As the enemy swept past him, each Saracen within range tried to kill him without actually stopping.

That was what saved his life. After their lances shattered, the slashing strokes of the Saracens’ swords as they swept by could not penetrate his chain mail. It took a direct, piercing blow to penetrate the linked steel rings, and none dared slow long enough to deliver that kind of thrust.

Ibelin huddled behind his shield, his head down to protect his face and eyes, making no attempt to fight until Centurion recovered his balance and began staggering and stamping his way forward, with a dogged determination that testified to the stallion’s own will to survive. At once Balian straightened, and screaming to reawaken his own courage, he started fighting—even if this consisted of little more than warding off the blows still directed at him, using both his shield and his sword.

Finally the wave of Saracen cavalry rolled over them, and the knights of Ibelin and Nablus emerged from the clouds of dust billowing up behind the enemy. Like islands in the swirling dust, clusters of mounted fighting men emerged. They were scattered across three hundred yards. Immediately beside and behind Balian, the knights of Ibelin still made up a coherent body of men, while the knights of Nablus formed a half-dozen distinct clumps.

But there were also a score of unhorsed men staggering out of the clouds of dust, stumbling, coughing, holding their hands to their bleeding wounds or cradling broken wrists, dislocated elbows, and wrenched shoulders. As the dust settled further, the trampled corpses of horses and a half-dozen other men emerged, while the piercing screams of a wounded stallion struggling to get to his feet despite two broken legs blotted out all other sounds.

Dawit was down before Balian could stop him. He personally put the injured horse out of his misery with a quick slash to his jugular. This action brought Balian to his senses. Behind them the Saracens had fully engulfed the King and his body of knights. This was no time to sit around staring.

“Get those men mounted!” Ibelin ordered, gesturing for the dazed squires behind him to pick up the unhorsed men. “All of them! Take them back to camp!”

“Wait!” Sir Bartholomew countermanded, laying a hand on Balian’s arm. The gesture had a calming effect, and the older man’s troubled eyes met Balian’s. “Have the wounded that still have horses take the unhorsed men. We need every unharmed fighting man we have—even the squires.”

“Yes,” Balian recognized the wisdom of the older man’s advice and smiled his thanks. “Any of you not fit to fight, take a rider behind you and return to the camp. Everyone else, form up!”

As the remaining fourscore knights and their squires formed a conroi around him, Ibelin saw Lusignan arrive from the northeast and start fighting his way through the enemy to reach the King. They would have to do the same thing. “A Ibelin!” Balian roared as he asked the now drooping Centurion for yet another charge.

Around him they answered “A Ibelin!” and “A Nablus!” even “Jerusalem!” and started forward at a lumbering, weary canter.

If they’d had lances, it would have been comparatively easy. The Saracens were focused on the King and Lusignan, not expecting cavalry to attack them from the rear. But without lances they could not cut a swath through the enemy; they had to fight their way through. The only good thing was that they were fighting cavalry; there were no Saracen foot soldiers stabbing at the bellies of their horses or trying to drag them down. Ibelin and his knights could drop their reins and urge their horses forward with their legs as they used their shields and swords to clear a path through the enemy to the compact body of knights around the King.

It seemed to take forever to kill their way forward, but they had almost made it. No more than two or three Saracens still separated Ibelin from the King when one of the Saracens, an exceptionally large man, stood in his stirrups and brought his sword down on Sir Tancred’s head so hard that it sliced open the helmet. Blood spurted like a fountain, coating and temporarily blinding his assailant, but as Sir Tancred’s heavy body fell sideways off his horse it fell upon the shoulder of the King’s stallion, causing him to rear up and spring sideways just as he had done in the last engagement.

Balian saw the King lean forward in an attempt to stay seated, but now the enemy was stabbing Lightning in the belly and the stallion flailed out with his front hooves, squealing in pain and terror. The King didn’t stand a chance; he lost his stirrups and fell backwards onto the ground.

The knights of Ibelin and Nablus burst through the enemy and turned to face the Saracens to shield their lord as he jumped down and dragged King Baldwin into his arms.

“Not yet, we aren’t!” Ibelin answered stubbornly. He pulled Centurion close and urged the King to mount. Baldwin, however, could grab neither the reins, the stirrup, nor the pommel with his lifeless hands, and the blood-mad stallion danced away from the strange rider again and again.

Ibelin was aware of men around them grunting, cursing, killing, and dying. Young Sir Adrian let out a blood-curdling scream as a Saracen sword gutted him. Blood spurted and then spilled in a stinking gush over Ibelin and the King. It was only a matter of seconds before their protection would be slaughtered. Balian had to get the King off the field, but he could not hold Centurion still and lift Baldwin up at the same time.

Suddenly Daniel was beside him on the ground. “I’ll carry him off!” the squire shouted.

Ibelin didn’t have time to think, much less contradict. Daniel was pulling the King’s lifeless arms around his own neck and hooking his arms through the King’s knees. Then he jogged away in a crouch, slipping almost unnoticed between the horses as the horsemen struggled with one another.

Balian grabbed Centurion’s reins, pointed his foot in the stirrup, and hauled himself back into the saddle, but he’d lost his shield in his efforts to help the King. The next instant he looked death in the face as a turbaned horseman charged at him, pointing his sword at his unshielded chest.

Then the hand holding the sword spun through the air with the longsword still in its grasp. The bleeding stub hit Balian in the chest before the rest of the body slumped down and fell between their horses. The knight who had saved him wore Sidon’s livery.

Sidon had been left holding his castle of Sidon. If he was here now, it meant he had reinforced the Christian forces with fresh knights. Indeed, Sidon’s knights, most of whom still had lances, were pushing the Saracens back, giving the exhausted men of the King’s bodyguard―and Ibelin―a chance to escape.

Ibelin had no illusions about his ability to fight effectively any longer. He had no lance, no squires, and no shield. The best he could do was live to fight another day, and as he turned a weary Centurion away from the battle, he was followed by what remained of his troop: some threescore knights and less than half a hundred squires. 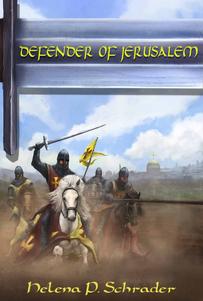 "It was rare for the Templars to arrive late..." -- An Excerpt from ​Defender of Jerusalem