“Does your lady always keep you waiting this long?” Aimery asked, drumming his fingers impatiently on the linen-covered high table.

“Actually,” Balian remarked, leaning back in his chair and turning the goblet between his fingers, “never. She’s a very punctual woman, but we didn’t give her much warning.”

“Dinner is ready,” Aimery retorted, indicating the ushers and pages and cooks already in position. The tables behind the screens were groaning under the burden of platters piled high with roasted geese, stuffed hens, and grilled goat, not to mention the beans, peas, carrots, and lentils in various sauces, and the bread piled high in baskets. The meal was ready, and the squires had already had a healthy share of it in the kitchens before taking up their stations behind their lords, ready to pour wine and water and serve. But the lady of the house was absent.

“Have some more wine,” Balian replied, signaling Dawit forward to pour for their guest.

Even as he spoke, however, Maria Zoë emerged from the screens and stood at the far end of the hall facing them. Since she had been in the bedchamber, to get to the screens meant she’d actually gone down into the ward and taken the outside steps, which at first puzzled Balian. Then he realized she was waiting for someone else. A moment later a lovely young lady stepped out of the screens, and Maria Zoë looped her arm through the other lady’s elbow as they started forward together.

"Who’s that with your wife?” Aimery asked, staring.

“Your wife,” Balian answered, amused, although he too had had to look twice before he recognized his niece.

"That’s what I thought; I just wanted to be sure before I did or said something inappropriate,” Lusignan answered, admitting after a pause, “I wouldn’t have recognized her in a different setting.”

Balian couldn’t resist commenting, “Well, whose fault is that? You were always welcome to visit more often.”

Aimery just grunted in reply and touched his face with his hand, feeling the four-day beard. Without taking his eyes off his approaching bride, he asked urgently under his breath, “How do I look?”

Balian laughed. “You look like you’ve been campaigning for a fortnight, and smell like you haven’t bathed in a month.”

Aimery frowned and leveled an annoyed look at Balian. “You don’t exactly smell like a bed of roses, either!”

Balian only had time to laugh before he pushed back his chair and welcomed his lady to the dais. After kissing her on both cheeks, he turned to Lusignan and announced with relish, “My niece, Eschiva de Ramla and Mirabel,” as the latter fell into a deep curtsy before the Constable, her husband. 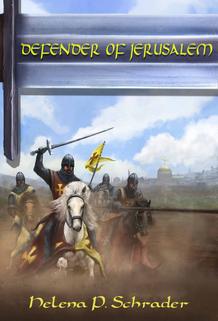 "The Forgotten Bride" -- An Excerpt from Defender of Jerusalem