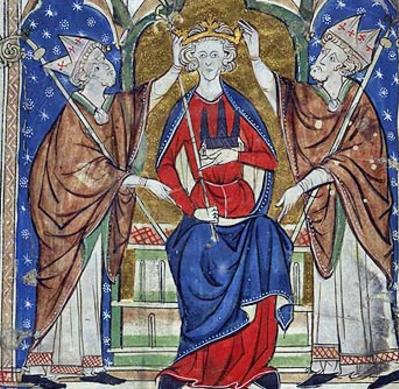 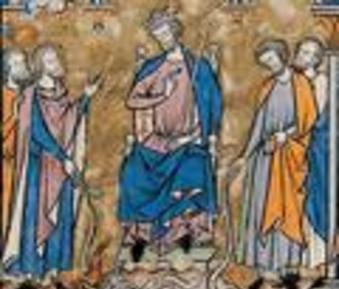 Perhaps the most remarkable thing about the Kings of Jerusalem is the fact that they were elected rather than born.

The tradition started, of course, with the conquest of Jerusalem in 1099. The First Crusade had never had a single leader and there was considerable (often destructive) rivalry between the leading lords that took the cross, notably, Raymond IV Count of Toulouse, Stephan Count of Blois, Robert Count of Flanders, Hugh Count of Vermandois, Bohemond Prince of Taranto and his nephew Tancred, and the brothers Duke Godfrey and Baldwin of Boulogne.  By the time the crusaders reached Jerusalem, Stephan had abandoned the crusade altogether, Baldwin of Boulogne had struck off on his own and captured Edessa, and Bohemond had remained in Antioch to re-establish a Christian state there.  The remaining lords, however, chose Godfrey of Boulogne to rule over Jerusalem.  Godfrey had won the respect of his fellow crusaders by his leadership, and although Raymond of Toulouse probably expected the honor himself, he accepted the choice.  Godfrey reputedly refused to wear “a crown of gold where Christ had worn a crown of thorns” and took the title of “Defender” or “Protector” or possibly just “Ruler” of Jerusalem.

Just one year later, however, he was dead without an heir. The nascent kingdom was in a more precarious state than ever, since the majority of the surviving crusaders felt they had fulfilled their vow and returned home. Those noblemen remaining in the Holy Land again (not without controversy) selected a successor from among themselves, in this case, Godfrey’s brother Baldwin.  Baldwin did not share his brother’s qualms about calling himself king, and took the title King Baldwin I. But in 1118 Baldwin I also died without an heir of his body, and the barons of the crusader kingdoms chose for a third time a leader from among their ranks, this time, Baldwin of Bourcq, who thereby became Baldwin II of Jerusalem.

Three such “elections” (with admittedly limited franchise!) set a legal precedent and the Kings of Jerusalem were henceforth always “elected” by the High Court of Jerusalem, the later being composed of the leading lords of the realm.  This is the equivalent of the English House of Lords electing the Kings of England!

As the products of European feudalism with strong ties to the ruling houses of England and France, however, the members of the High Court showed a strong bias in favor of blood relatives of the last monarch. Nevertheless, the approval of the High Court was considered a prerequisite for legitimate rule. Thus every time a king died, there was effectively an interregnum (if not outright crisis) while factions positioned themselves and consensus was established.

Perhaps the most serious succession crisis occurred at the critical period when Saladin had united Islam for the first time in a hundred years and declared his intention to wage jihad against the crusader kingdoms until he had pushed them into the sea. The king at the time, Baldwin IV, suffered from leprosy and was dying limb by limb; he had no children.  His closest male relative was his 8 year old nephew, the son of his sister Sibylla.  To prevent Sibylla’s husband, who the dying king detested and mistrusted, from becoming king, Baldwin IV orchestrated the coronation of his nephew during his lifetime, thereby ensuring the barons had all sworn their oaths as vassals to the boy as Baldwin V.

Recognizing, however, that life was fragile in the Holy Land in the 12th century, Baldwin IV also made his vassals swear to  consult with the Kings of England and France and the Pope before a electing a king to succeed his nephew, if the boy did not survive into adulthood. This elaborate attempt to curtail the sovereignty of the High Court of Jerusalem failed utterly.

When Baldwin V died less than a year after his uncle, no one had time for such a lengthy process as sending to London, Paris, and Rome for advice.  (The English and French kings could be counted on not to agree on anything anyway, since they were at war with one another.) Instead, while the High Court was meeting in Nablus, Princess Sibylla and her husband staged a coup: they persuaded the Patriarch to crown and anoint Sibylla queen of Jerusalem in the Church of the Holy Sepulcher. She then crowned her husband Guy de Lusignan as her consort.

Without the consent of the High Court, however, Guy de Lusignan was a usurper.  The bulk of the barons were prepared to oppose him by crowning an alternative candidate, namely the husband of Baldwin IV’s other sister, Isabella. With the enemy almost literally at the gates, however, the High Court’s choice for king, Humphrey de Toron, chose not to contest the kingship and took an oath to Guy de Lusignan instead.  While this act made it politically impossible to oppose Guy de Lusignan, Raymond of Tripoli was legally within his rights to refuse to swear allegiance to Guy.

While the High Court was circumvented by Sibylla and Guy’s coup in 1186, the High Court exerted (and revenged) itself effectively six years later when Sibylla and her daughters by Guy died of fever in 1190.  Guy saw himself as an anointed king and sought the support of his father’s overlord, the most powerful monarch in Christendom and only military commander with a chance of restoring the fortunes of the crusader kingdoms: Richard “the Lionheart” of England. Richard unequivocally supported Guy’s claim to the throne of Jerusalem – but the High Court still refused to acknowledge him because, with Sibylla’s dead, Guy’s claim to the kingdom was -- in the eyes of the barons of Outremer -- extinguished.

Since Humphrey of Toron was unwilling or unable to oppose Guy, the High Court pressured a reluctant Isabella, the last surviving child of King Amalric I, to divorce Humphrey and take a new husband, Conrad of Montferrat. Conrad was then recognized by the High Court as the legitimate king of Jerusalem. Since Jerusalem was still in Saracen hands, no coronation actually took place, but after two years Richard the Lionheart backed down and conceded that without the consent of the High Court even an anointed king could not rule the Kingdom of Jerusalem.