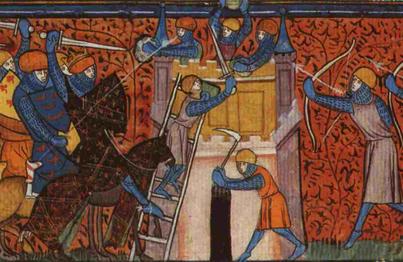 ​​​The Christian Kingdom of Jerusalem is under siege. The charismatic leader Salah ad-Din has not only succeeded in uniting Shiite Egypt with Sunni Syria, he has declared jihad against the Christian kingdom.  While King Baldwin IV struggles to defend his kingdom from the external threat despite the increasing ravages of leprosy, the struggle for the succession threatens to tear the kingdom apart from the inside. In the high-stakes game, one man stands out for his loyalty to the dying king, the kingdom and Christianity itself. That man is Balian d’Ibelin.

Quill says: This is a do-not-miss series that you will keep on your shelves in order to read again and again, with each time awakening more emotion and bringing Balian’s valiant history to life.

Most readers will agree that to create a biographical/historical tome that will entrance, excite and lure them in to the point where they literally do not want to stop reading until the six hundred or so pages are over, is a feat next to impossible. However, this is the second book in a series of three – the first being Knight of Jerusalem – that owns the power to do everything just stated above.

The story is incredible. The locations are brought to life by this author with perfect clarity during a time in history that was more than confusing. This was a time where everyone seemed to work night and day to gain power – whether it was individuals with personal plans set in place, or entire religious sects that refused to step away.

In this second novel, Jerusalem (the Christian kingdom of Jerusalem) is under massive siege. Salah ad-Din is the Kurdish leader who is so vibrant that he can basically sell any idea to anyone (think the old adage of selling ice to the Eskimos). He was able to bring together two units to form one, Shiite Egypt and Sunnite Syria. Now that these two powerful forces are one team, so to speak, they declare jihad against the Christians. King Baldwin IV is already dealing with a horrific issue: leprosy. The disease is attacking him, and has been since he was a boy. But now he must rise up in the face of this monumental battle coming straight at him and find a way to stop Salah ad-Din from coming in and taking over the kingdom.

The one man who has already proven himself beyond a shadow of a doubt to King Baldwin is Balian. Balian d’Ibelin (for those who did not read the first in this amazing three-part series) was a man who had no land and no title. All he has this day is his background with the king. When the king was just a prince, Balian was placed in the kingdom by then monarch Amalric I, to take care of the boy with leprosy who was isolated from nearly everyone. Balian is still there beside him and has worked with the courage, strength, and bravery that outranks any knight or loyal follower. Balian is in this struggle for the long haul, and he is the one fence that this jihad will have to knock down in order to take out the people of Jerusalem, bury the king, and rip to shreds the basis of Christianity.

Watching Balian grow with the Prince was beyond memorable in the first book. He was involved in the inner core of this kingdom and made friends with the right ones, as well as some of the wrong who were sent away. Now, in the year 1178, his mission in life is anything but complete.

This is a book that is biographical, yes. But the real meat and bones of this story are the emotions. Everything from war to suspense; romance to kindness; good to absolute evil – and even the presence of the well-known and well-read Templar crusaders – everything is offered by this writer in order to bring Balian’s life, as well as the fight for Jerusalem, into full-blown Technicolor. (Note to Hollywood: This should be done on-screen in Technicolor, as well.)

In addition, the author has included maps of the Holy Land during this period, genealogical family charts, as well as historical notes for readers to understand every crack and crevice of this kingdom and its legendary battles.

Paul on August 12, 2015
Biographical Action At Its Finest!
Defender of Jerusalem looks at one of the most important figures of the Crusading era. Portrayed by the likes of Orlando Bloom in the Ridley Scott blockbuster "Kingdom of Heaven", Dr. Helena Schrader's use of historical records to construct an accurate and compelling personage of Balian d'Ibelin is coupled with her ability to write a cracking good story!

Helena Schrader's work is both entertaining and challenges the typical views on the people who undertook the Crusader mantle.

One final piece of the book which is an amazing help is the Historical Note toward the end. While many people will create a persona for a historical figure and sometimes take them off the historically "beaten path", the author explains very carefully where she drew the inspiration for the Balian of this novel. and cites supporting primary source evidence. What little was invented (and the list IS short) is both brilliant, and carefully chosen so as not to detract from the story, but to add to the overall narrative.

Anyone interested in the Crusades or Balian D'Ibelin should pick up this book! 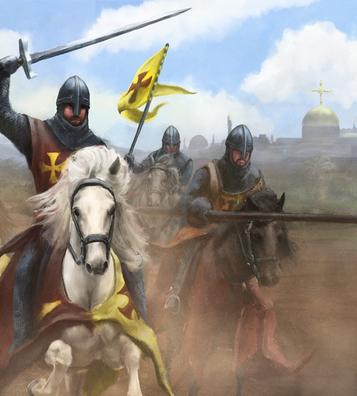