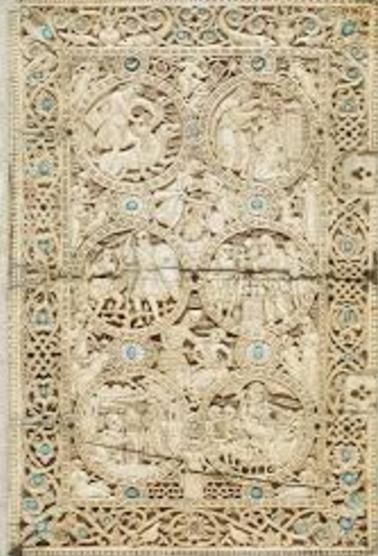 Enameled Glass from the Kingdom of Jerusalem 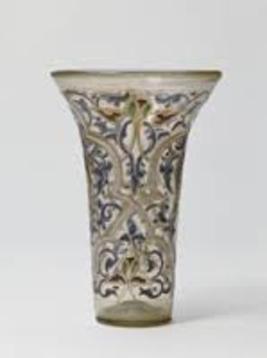 Glass from the Crusader States 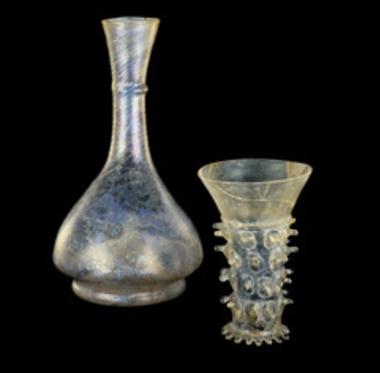 Pottery from the Crusader States 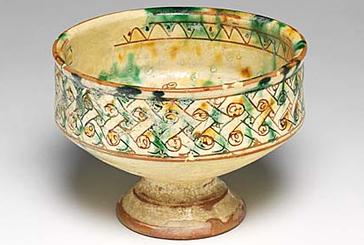 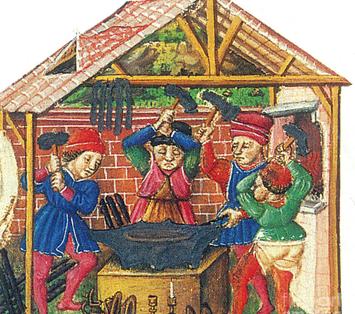 Although the crusader states prospered through trade, not everything used in the crusader states was imported and not all exports were commodities. The crusader states developed indigenous crafts both for everyday and luxury goods. These included, of course, metal-working and wood-working, leather goods, ceramics, textiles, and glass. Most of these products were produced by native craftsmen, who continued to use the same techniques as before the Latin conquest, but the motifs often shifted to include crosses, fishes and other Christian symbols, and styles were soon influenced by the taste of customers as well as exposure to products imported from the West. The native craftsmen, however, had developed their crafts over the centuries, heavily influenced by earlier waves of invaders from the Romans and Byzantines to the Saracens. Thus their work inevitably reflected these layers of past influence now combined with Western European influences to form distinctly crusader crafts.

Because of its durability, we know that crusader metal-working was of a very high standards as surviving objects of the period from several of the key churches attest. Objects included metal screens or grilles, candle sticks and candelabra, brass bowls and bells, as well as magnificent silver and gold work in reliquaries and jewelry. Jerusalem had an entire street known as the Street of the Gold Smiths, attesting to the quantity and popularity of gold work produced in the Holy City. Many (if not most) of these luxury products undoubtedly ended up in the West, as pilgrims took them home as keepsakes and gifts and today may not be identified as originating in the crusader states. At the lower end of the scale, there were many blacksmiths in the Holy Land, both native and settlers, and most earned their living producing articles needed for daily life from horseshoes, plowshares, hammers and shovels, to maces and battle axes, although it appears that most swords were imported either from Damascus (famous for its steel) or the important weapons centers in Italy and Germany.

Wood, leather and textiles goods have largely been lost, but some cloth fragments are witness to the use of wool, cotton, linen and silk in cloth manufacture in the crusader states. Interestingly, evidence of mixed fabrics — silk warp with wool, linen or cotton weft — have been found.  Fragments of both dyed and undyed fabrics have been found, as well as patterned fabrics created by woodblock printing.  In addition, there is evidence that cloth, particularly silk, was decorated with silk or gold embroidery and brocading. The colors that have survived in the few finds of textiles from the crusader period ranged from ivory, yellow and gold to red and various shades of blue. However, purple was the imperial color of Byzantium and extracted from shells found along the coast of the Levant. I would certainly have been available at least for the upper classes, and it is reasonable to assume that green tones could also be produced and would have been available.

Pottery from the crusader period has survived in much larger quantities and demonstrates that while some pottery was imported from Egypt and Syria, the vast majority of pottery objects in use in the crusader states was produced locally and was often of very high quality. Pottery was used for the production of cooking pots and pans, storage jars and jugs, basins, bowls, plates and cups. It was often decorated with incisions in the unfired clay, and designs were painted either beneath a transparent glaze or with colored glazes. The most common color scheme was red or brown painting on a white backdrop, although blue and black designs on white have also been found. Cream and pale green glazes were also popular. Popular motifs included ancient geometric designs, foliage, birds and animals, but also human figures, crosses and fishes — i.e. Christian symbols. One distinctive feature of much local pottery that made it popular with pilgrims was the use of transparent glaze on the inside of pots and pans to create an early kind of “Teflon” — stick-free cooking.

Perhaps the more sophisticated and beautiful craft of the Holy Land was glass-making. Glass was used in windows in the crusader period, both stained and painted glass for churches, and round and plate panes for windows in secular buildings. Green plate glass from the crusader period, for example, was found at a farmhouse less than five miles from Jerusalem; it would probably have graced the manor of a local lord.  Glass was also used for the drinking vessels, both beakers and goblets, and for bowls and bottles.  Bottles with long necks for perfumes and the scented oils produced in the Holy Land were probably popular among pilgrims as gifts for those left behind. Glass was also used for storage jars and for oil lamps, a continuation of Byzantine and Arab traditions. Glass in the crusader period was often dyed and/or decorated. The colors of crusader glass found to date include yellow, red and light brown, emerald and light greens, turquoise, shades of blue as well as light and dark purple. Decorations included geometric designs and heraldry, foliage, birds, animals as well as saints and religious motifs. Some glass objects also have inscriptions. Tyre was known particularly for its glass-making industry and the glass produced was reputedly particularly transparent. However, glass-making was also carried out in other crusader cities, including Acre and Beirut, which was famous for its red glass.

In short, the crusader kingdoms had a lively, diverse and comparatively sophisticated craft industry capable of producing not only articles for everyday use, but beautiful and valuable objects. This reflects a high level of civilization typical of a society with extensive trading ties and elites with sufficient income to support quality craftsmanship. Particularly interesting in crusader crafts is the synthesis of Arab/Egyptian, Byzantine and Western influences to produce a unique and distinctive “crusader style” in a variety of objects.