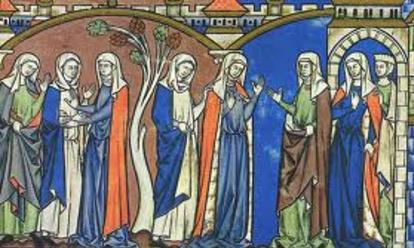 The perishable nature of clothing inhibits our ability to knw exactly or in great detail how the residents of Outremer dressed.  We have to rely on the textile and garment fragments that have been found, contemporary artistic depictions and literary descriptions. Of these sources, depictions and descriptions both suggest that the fashion in crusader states was set in Paris more than Damascus, but this does not mean that modifications were not made to accommodate the weather and other conditions in the Holy Land.

Least impacted by circumstances and so least unique were the armor and arms of the military elite.  The armor and weapons of Western knights had proved superior to the protective armor and weapons of the Saracens from the time of the First Crusade. That fundamental advantage continued throughout the period of Latin rule in the eastern Mediterranean. This is not to say that there was no development. On the contrary, arms and armor underwent dramatic changes in the two hundred years from 1099 to 1291, and again before the fall of Cyprus to Venice in 1473.  The evolution of arms and armor, however, was common to the entire West, with local variation to be sure, but any major innovation that provided significant advantages was rapidly adopted by a ruling elite that was remarkably mobile given the means of transportation.

There was, however, one innovation which is widely attributed to crusading, and this was the evolution of the “surcoat” a cloth garment worn over armor.  The argument for attributing the emergence of the surcoat in the 12th century is that fighting in the intense sun of the Middle East would have made chainmail dangerously hot; by covering it with a thin, loose and flowing cloth, however, the chainmail could be kept comparatively cool. With the surcoat came the opportunity to wear colors and so also to wear distinguishing devices or “arms” as well. Hence the evolution of heraldry goes hand-in-hand with the emergence of the surcoat as an integral part of a knight’s battle dress.

Off the battlefield, the men of Outremer may have been tempted to adapt some of the clothing customs of native inhabitants.  It seems logical (at least to us) that at least during the hot summer months, men at leisure might have preferred loose flowing robes to hose, padded garments such as gambesons, much less fur-lined cloaks and hoods. There is, however, little to no evidence to support this. The depictions of barons and knights in manuscripts, sculpture or seals consistently show men of the military elite in military regalia. Kings are often depicted in voluminous robes, but these are identical to the robes of kings from the West. This has led some scholars to suggest that it was a matter of class pride not to adapt the fashions of the natives. Such an interpretation, however, is more consistent with earlier assumptions about “colonial” attitudes than recent evidence of inter-marriage and close cooperation with native Christian elites. In short, we do not know how the men of Outremer dressed “off-duty” and in private settings.

We know even less about what the women in the crusader states wore.  They are depicted less frequently in art, and if so almost always in conventional Western garb. We know for certain that they did not adopt Muslim customs of going about completely veiled. The evidence for this comes from Muslim sources that both decry the lack of “modesty” displayed by crusader women―and admire the allure of women so exposed to the eyes of strange males.  That said, I also suspect that women will have found some means of protecting their skin from the ravages of the Middle Eastern sun, and this may have included veils worn over their faces while out of doors. Or it may have entailed wide-brimmed hats that cast a shadow.  Yet both ideas are pure speculation.

Furthermore, although the style of clothing may not have differed significantly from what was the latest fashion in Paris, Cologne, Pisa and Rome, the materials used could have made a significant difference to the effect of the clothes. The same surcoat or gown will fall, fold, billow and sway differently if made of heavy woolen or stiff linen compared to cotton gauze or silk. Many of the fabrics of Outremer were sheer, translucent or semi-transparent. Depending on how such fabrics are employed, they could have created enticingly provocative (or in the eye of clerics and conservatives vulgar and immodest) garments without ever deviating from the fashions wore in London or Paris. Likewise, a gown that is simple in cut and form can be transformed by silk brocade or a weft of gold into something stunning, luxurious and so (depending on your ideology) something self-indulgent and extravagant.

Archaeologists have uncovered thousands of fabric fragments dating to the crusader era. While it is impossible to know if these were locally produced or imported, used by natives or the Latin elites, they do demonstrate the variety of textiles available. They included silk, cotton, linen, felt, wool, and cloth woven from goat hair. They also include a large number of hybrid fabrics composed of a warp of one kind of yarn and weft of another, such as silk and wool, linen or cotton.

We also know for a fact that some of the finest cloth known to the medieval world originated in the Near East. Egyptian cotton and linen, both renowned for their quality, were exported through the ports of the Levant as was silk from Damascus. Words familiar to us as types of cloth such as muslin, gauze, and damask derive their names from the cities that first produced them in export quantities, namely Mosul, Gaza and Damascus. Other fabrics no longer in use, such as siqlatin (silk woven with gold), were also known to have been traded through the ports of the crusader states and so were certainly in use there.

Nor did these textiles just pass through the ports of Outremer. There is documentary and archaeological evidence that textiles were produced in the crusader states. There were, for example, some 4,000 silk weavers in the County of Tripoli.  Tyre was famous for its white silk. Beirut exported both silk and cotton fabrics, while cotton was grown around Acre, Tiberias and Ramla.

Almost as important as the material from which clothes were made are the dyes used to color it.  Here again, the crusader states sat near the source of many materials coveted for dying. Saffron, turmeric, and indigo ― not to mention the muscles found only off Tyre and the Peloponnese needed for a rich purple dye ― were all more readily available and cheaper in the crusader states than in Western Europe. This makes it probable that they were used more widely and more generously used, producing much brighter colors than was common in the west.

And then comes the decoration. Weaving with different color threads, block printing and embroidery were all means of creating patterns and prints on the cloth fragments from this period.  Silk brocade and stitching with spun gold were particularly expensive and coveted forms of decoration for clothing that are known to have been exported from, if not produced in, the crusader states.  Byzantine fashions influenced the crusaders more than Arab fashion. Note the elaborate decoration and the silk brocade used for the gown itself in the picture to the right.

It was probably the combination of fine cloth and the use of vivid colors in decoration that made the clothing of Latin elites in Outremer seem exotic to visitors from the West. It was often commented upon by crusaders that the lords of Outremer were very rich and luxury loving. Some of that reputation came from a proclivity for bathing, and the use of sweet scents and perfume, but some was undoubtedly the apparent extravagance of dress that came from being able to afford for everyday materials that in the West were saved only for special occasions.

The Hollywood version of casual crusaders. 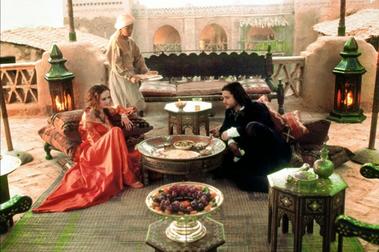 Frankish Fashion and Clothing in the Crusader States 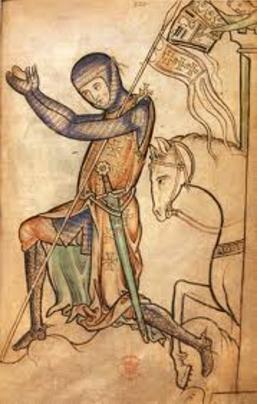