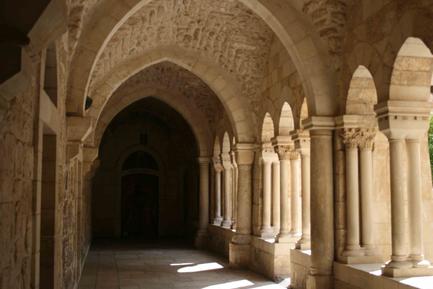 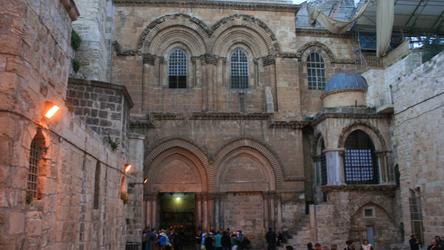 Christ's Entry into Jerusalem from the Melesinde Psalter, mid-12th Century 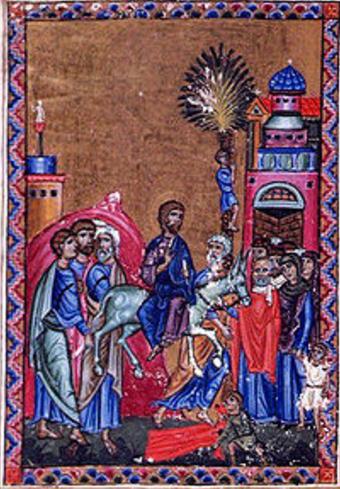 Crusader Wall Mosaics in the Church of the Nativity in Bethlehem 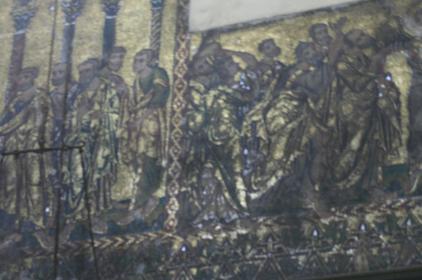 The Crusader Cloisters at the Church of the Nativity

Crusader Portal to the Church of the Holy Sepulcher

The scarcity of art work dating from the crusader period found in the Holy Land today does not reflect — as some commentators suggest — a lack of artistic accomplishment or interest in the arts on the part of elites in the crusader kingdoms. Rather, it is the result of the systematic destruction and theft of crusader art by the conquerors combined with the ravages of war and time. We know from the written record and from the few fragments of art that survive that the Kings of Jerusalem and other Christian rulers invested huge sums in the construction/re-construction and decoration of churches. We also know the luxury in which the elites in the crusader states lived attracted censure as well as awe and admiration from Western pilgrims, suggesting that secular buildings were likewise beautifully decorated.

The best surviving evidence of crusader art is the architecture and sculpture, retained in places such as the Church of the Holy Sepulcher and the Church of the Annunciation at Nazareth.  Fragments of crusader sculpture have also been found at Sebaste, Montfort and St. Mary Major in Jerusalem. However, except where Christian motifs or location make the dating of sculpture unassailable, many works of crusader sculpture are hard to identify because they were incorporated into buildings that were subsequently modified and overlaid with work of later centuries. The covered markets of Jerusalem, for example, are largely crusader in origin, but have been used continuously, added to and or modified in succeeded centuries. From the few pieces that have been identified as crusader sculpture, a clear mix of Byzantine and Romanesque influences defines a unique "crusader" style.

The Church of Nativity in Bethlehem houses magnificent mosaics from the crusader period. Very extensive wall mosaics depict the life of Christ, the Ecumenical Councils and the ancestors of Christ. These mosaics were carried out in the Byzantine style and were probably executed by Byzantine artists, but they were commissioned by the Kings of Jerusalem, probably Amalric I, who was married to a Byzantine princess and maintained close ties to the Byzantine Empire. The choice of Greek artists may also have been guided by the fact that the Church of the Nativity was one of the best preserved churches in the Holy Land, having survived destruction at the hands of the Persians. The floor tiles date from the reign of Constantine and were allegedly commissioned by St. Helena. They are still in place today.

Wall painting was almost certainly popular in the crusader states just as it was in the South of France, whence so many of the early crusaders came. It was, however, particularly vulnerable to obliteration because it was so easily painted over — a method of eliminating unwanted decoration that also inadvertently preserves it for the archaeologist. At least four important frescos from the crusader period have come to light in the last half century, including at Crac de Chevaliers.  The style of most wall-painting from the crusader period found to date suggests that Byzantine artists, or craftsmen trained in the Byzantine school, were used for such painting, although the choice of subject was clearly dictated by Western traditions.

In contrast, manuscript illustration appears to have been dominated by Western craftsmen. We know from the written sources that a Scriptorium was established by the canons of the Church of the Holy Sepulcher. This workshop is said to have produced a large number of works of very high quality, very little of which has survived. One exception is the psalter made for Queen Melisende of Jerusalem. After the fall of Jerusalem, there appears to have been an attempt to re-establish a Scriptorium in the Holy Land, this time in Accre, but the quality of the work is notably inferior to that from the Holy Sepulcher. Furthermore, whereas the illustrations of the Melisdende psalter and other works from the 12th century demonstrate strong Byzantine influence, the works from the Acre scriptorium are French and Italian in style.

These fragments of crusader art that survive are pitiably little, a mere whisper of what must have been a rich and distinct artistic heritage formed by the cross-fertilization of various cultures and artistic traditions at the ancient cross-roads of civilization on the eastern edge of the Mediterranean. For further reading I recommend Jaroslav Folda's lovely illustrated work Crusader Art: The Art of the Crusaders in the Holy Land, 1099-1291, ​Lund-Humphries, 2008.