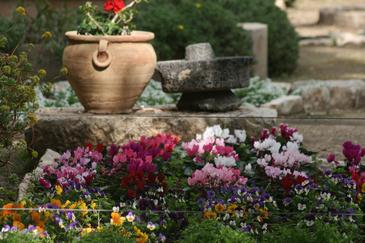 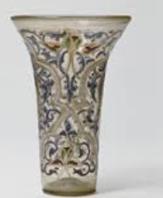 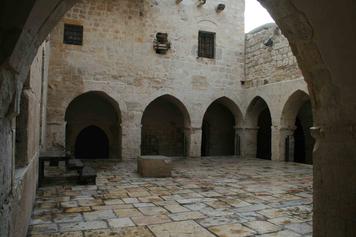 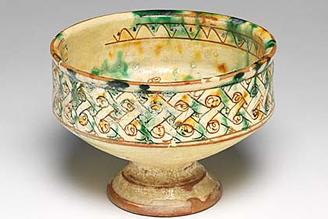 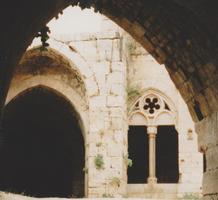 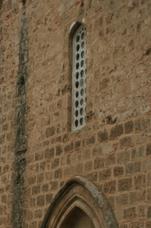 The Bishop of Oldenburg, traveling to the Kingdom of Jerusalem in 1212, was stunned by the luxury of the residences of the elite. According to Sir Steven Runciman in his "Families of Outremer," Oldenburg was particularly impressed by the Ibelin palace in Beirut:

Its windows opened some on the sea, some on to delicious gardens. Its walls were paneled with plaques of poly-chrome marble; the vaulted ceiling [of the salon] was painted to resemble the sky with its stars; in the center of the [salon] was a fountain, and round it mosaics depicting the waves of the sea edged with sands so lifelike that [the bishop] feared to tread on them lest he should leave a foot mark.

Unfortunately, nothing of this palace remains today. The same is true of the Lusignan palace in Nicosia, but Volume 4 of A History of the Crusades: The Art and Architecture of the Crusader States, Hazard, Harry W ed. provides the following summary:

The royal palace, adjoining the church of St. Dominic, seemed to travelers the finest in the world. Its great throne room, its balconies, its golden ornaments, its tapestries, pictures, organs, and clocks, its baths, gardens and menageries suggest the most sumptuous of medieval residences. (p. 175)

While both the above passages refer to palaces (baronial and royal respectively), the following is a more general commentary on Frankish domestic architecture in the crusader states. Writing after the re-conquest of Jerusalem by Saladin in 1187, Ibn-Khallikan wrote:

"the infidel had rebuilt [Jerusalem] with columns and plaques of marble...with fair fountains where the water never ceased to flow--one saw dwellings as agreeable as gardens and brilliant with the whiteness of marble; the columns with their foliage seemed like trees." (quoted in Hazard, p. 138.)

Yet only scattered fragments of this sophisticated urban secular architecture from the crusader period have survived into the present. Even these remains have largely been obscured by the changing styles and functions of that altered the appearance of crusader structures almost beyond recognition in subsequent centuries.

Due to a general scarcity of wood, the basic building material in the Middle East in the crusader period was stone and/or brick. The latter, and often the former, was plastered over and whitewashed, both inside and out, or faced with marble in the case of important and representational buildings. The floors of poorer dwellings were either beaten earth or cut out of the bedrock, while upper floors were plaster. In wealthier homes the floors were usually flagstone on the ground floor, marble or mosaic. Courtyards were usually paved with cobbles.

The basic building block of houses in the Holy Land were vaults. Barrel vaults were the easiest and most fundamental building block and could be stacked on top of one another at perpendicular angles for several stories. A good example of this is the Hospitaller Castle of Kolossi. Groin vaults and rib-vaults, however, was also common, particularly in larger structures such as palaces, monasteries, customs houses, and the like. To the right, under the simple vault from Kolossi is an image of beautiful vaulting from Bellapais Monastery on Cyprus.

Most houses in the crusader states appear to have had at least one, and in urban areas -- particularly in the 13th century -- as many as three upper floors. The upper floors were often reached by means of an external stairway over a arch (see photo below), or by means of internal wooden stairs or even ladders through trap doors. In larger, rural structures, stairs could also be built into the thickness of the walls. The house below, located on Kythera, is much younger (17th century Venetian), but it has many of the features of crusader urban architecture.

Most buildings in the Middle East were crowned, then as now, by flat roofs (that might be decoratively crenelated) that often provided additional living or work space in the form of a roof-top terrace that could be shaded from the sun by canvas awnings, or a vine arbor.

Whether used as a terrace or not, rooftops almost always collected rain water in a cistern.  Indeed, even the poorest and smallest of urban dwellings had cisterns, often several. All had settlement tanks to help purify the water.  Water could be pumped from these tanks to the kitchens or latrines.

Many urban dwellings would have been built around one or a series of courtyards. These in turn contained cisterns or sometimes wells, kitchen and formal gardens, or working space, depending on the wealth of the occupant. The photo to the right shows a courtyard in Jerusalem with many medieval elements and does not look so very different from what it could have looked like in the 12th century. Poorer residents, who could no afford a house large enough to surround one or more courtyards often shared a communal courtyard. Around a courtyard, several dwellings were clustered, all with access to the common courtyard.

Despite the prevalence of courtyards, Frankish houses were not inward-looking. Unlike their Arab contemporaries, the houses of the rich had beautiful balconies and logias that looked out over the streets from the upper stories. The roof of the logia in urban areas might be supported either by an arcade or by pillars. Some of these pillars were reclaimed Roman pillars, employed in a new function, but the Franks were skilled at producing pillars themselves and the capitals of these were famous -- even among their enemies -- for the lifelike quality of their decoration. In rural settings the logia could be even more dramatic as in the example below from St. Hilarion on Cyprus.

The working class on the other hand had workshops and store fronts that opened onto the street at ground level. Doors throughout the Frankish territories from the mid-12th century until the end of Frankish rule were usually made by a wide, slightly pointed arch. This arch, borrowed from the Arabs before the beginning of true Gothic architecture in the West, was the dominant, indeed iconic, shape of crusader architecture. Poorer dwellings or secondary doors, however, could be square.

Windows could be either arched or square, with the Romanesque forms of “double-” or “triple-light” windows as common in the Holy Land as in the countries of the crusaders’ origin. To the right ares some examples of a medieval portal in Jerusalem, and windows from St. Hilarion and Krak de Chevaliers respectively.

Because there were major glass producing centers in the crusader states (notably Tyre and Beirut), window glazing was more common in the crusader states than in the West, a fact supported by both archaeological finds and descriptions. Right is an example of crusader glass manufacture. While the context is different, this glass demonstrates the very high quality of the industry generally. Archaeological evidence suggests the Franks used both plate glass and round glass set in plaster (the latter being presumably much cheaper and more common) for their windows. To the right is an example of the round glass technique used here in the Templar Church in Famagusta, Cyprus.

As the description at the start of this essay indicated, interior décor could include poly-chrome marble, but mosaics and glazed tiles may also have been used. Certainly, a wide variety of crusader glazed pottery has been found, using cream colors, yellows, greens and blues. The pottery gives us some indication of what colors and motifs could have been used on floor and wall tiles, although the evidence is lacking. To the right is an example of crusader pottery.

However, we also know that the Turks and Saracens were very fond of brilliant blues and turquoise tiles in later centuries, and these may also have been available to the crusaders. At least I like to imagine it so!

As for mosaics, the description at the start of the article is perhaps the best indication of quality and the fact that life-like motifs were possible in the crusader era. However, we should not forget that mosaics floors were very common in the Roman and Byzantine periods, and the many crusader residences in fact dated from earlier periods and retained these older tiles. Particularly under the influence of the Byzantine brides of Baldwin III and Amalric I, Byzantine styles and artists were welcomed and employed in the crusader kingdoms.

Last but not least, as the contemporary written descriptions stress, no description of urban architecture in the crusader states (at least for the “upper crust”) would be complete without reference to gardens. Frankish elites oriented their houses so that their (glazed) windows looked out at either views (such as the ocean) or gardens. The Holy Land offered a variety of beautiful vegetation from trees such a palms and olives, lemons and pomegranates, to flowers such as hibiscus and oleander. Frankish gardens would have been beautiful indeed.  So to conclude, here is a picture of a garden in the crusader church of St. Anne in Jerusalem today. 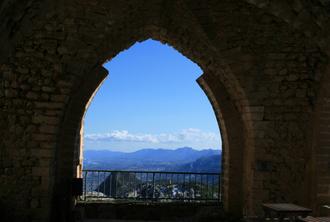 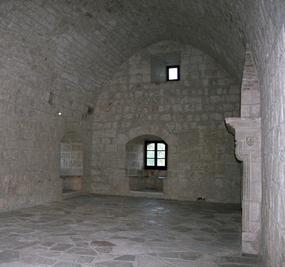 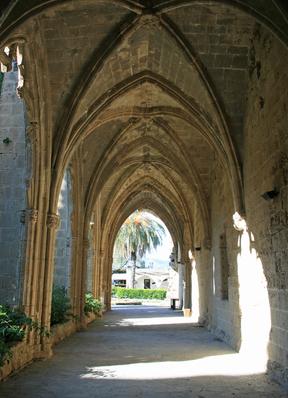 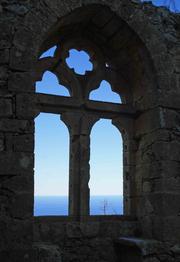 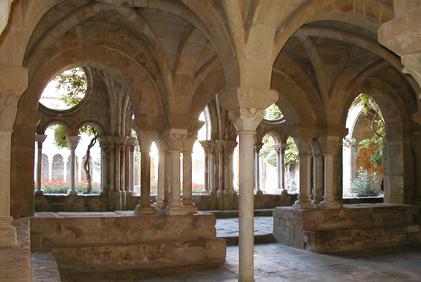 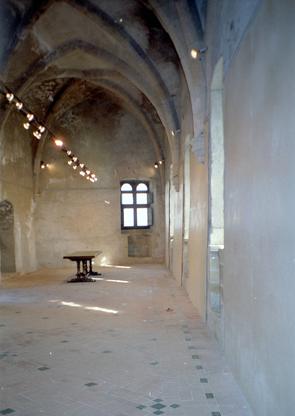