The Conquest of Edessa 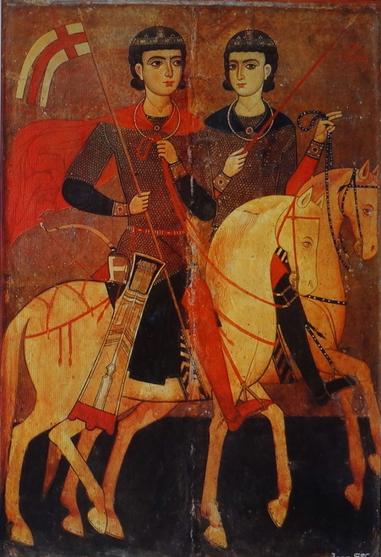 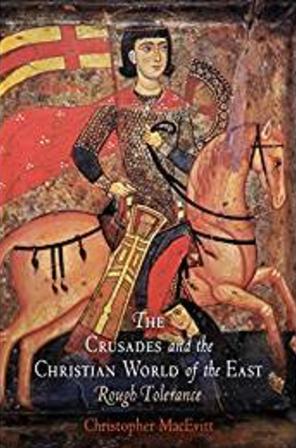 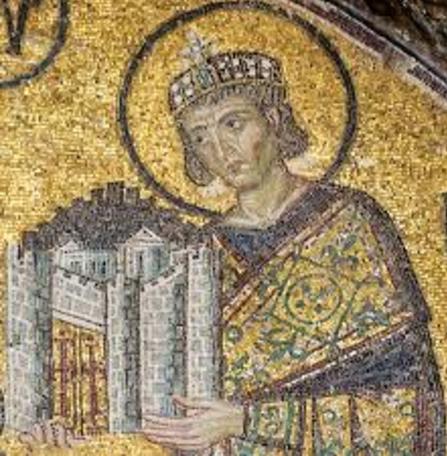 The establishment of the crusader “county” of Edessa is often ― at least implicitly ― treated as a “conquest.” The impression conveyed is that the crusaders (or Franks) invaded, seized control of territory by force, and established a state (in this case styled a “County”) that was controlled by Latin elites. But Baldwin of Boulogne was accompanied by just sixty knights when he followed an invitation from a local warlord, Thoros, to go to Edessa. As Christopher MacEvitt makes clear in his meticulous study The Crusades and the Christian World of the East: Rough Tolerance, the crusader County of Edessa was more a complex network of local alliances than an invasion ― much less a colony.

The story of the crusader presence in Edessa, as indicated above, started with an “invitation” from a local warlord, and was legalized by an official adoption. Edessa was an ancient and wealthy city that at this time rivaled Antioch and Aleppo in importance. When in 1098 the First Crusade reached northern Syria, Edessa was in the hands of a Greek Christian warlord, the most recent “strongman” in a long line of short-lived warlords, who came to power by murder or popular acclaim ― only to lose favor rapidly and themselves be murdered or flee. Thoros fearing the fate of his predecessors if he could not fight off the ever present Turkish threat, sought help from the most recent military force to arrive on the scene: the crusaders. MacEvitt suggests convincingly that Thoros was making the same mistake that the Byzantine Emperor Alexios I Comnenus had made, namely, of conflating crusaders with Frankish/Norman mercenaries. Thoros wanted the evidently effective commander Baldwin of Boulogne to come fight his battles for him; he never really thought he was inviting in a successor.

Baldwin, however, was not a mercenary. He rejected mere material gifts such as gold, silver and horses, in a bid for something more important still: power and control. When Thoros refused, Baldwin threatened to leave, and “the people” (by which one presumes the chroniclers mean the elites) insisted that Thoros give way. Thoros formally adopted Baldwin in a ceremony (telling) using Armenian relics and customs. Unfortunately for Thoros, this proved insufficient to placate an evidently unruly population. Within a month of Baldwin’s adoption, the mob had turned on Thoros, murdering him, his wife and his children mercilessly. There is no evidence that Baldwin was behind the murder, much as he benefited because, once Thoros was dead, the citizens jubilantly proclaimed him “doux” ― a Greek title that usually implied subordination to the Emperor in Constantinople.

Obviously, Baldwin of Boulogne was no vassal of Constantinople, but he was also not a conqueror in control of invaded territory either. He still had only 60 knights of his own and he owed his elevation to the local, predominantly Armenian population. MacEvitt makes the point that from the point of view of the Edessans they had not helped establish a “Frankish” or “Latin”  or “crusader” state at all; they had (as so often in the past) simply replaced one “strong man with vague Byzantine ties” with another.

Furthermore, Baldwin’s career would certainly have been as short-lived and as forgettable as that of the previous half-dozen “rulers” of Edessa, had he not proved astonishingly adept at building alliances with surrounding warlords, nobles and elites. That process started with the simple expedient of leaving the Armenian administration of the city undisturbed. Baldwin also adopted Armenian symbols and rituals, and he rapidly married into the Armenian aristocracy as well.

But he still faced not so much opposition as indifference on the part of all the other petty Armenian warlords of the surrounding countryside because the “County” of Edessa was not a unified territory at all, but rather a patchwork quilt of minor princlings and lords, who each ruled their individual towns and castles by force. This was a land of “robber barons,” each jealously guarding their own territory and always on the alert to weaken or take advantage of the weakness of a neighbor. The Armenian warlords also rapidly set to work pitting one crusader lord against another, in what (in retrospect) seems like an almost playful experiment of seeing just how far they could go. The crusaders, significantly, after some initial squabbling eventually countered these attempts by closing ranks against the Armenians and eliminating the worst trouble-makers.

More dangerous to Baldwin in Edessa, however, was that as soon as he started to exert his authority there, the very citizens who had “elected” him, decided to depose him ― just as they had all his predecessors. Baldwin was lucky. One of the “councilors” turned traitor, told him what was afoot, and Baldwin struck first. He arrested the councilors, threw them in a dungeon, extracted ransom payments from them and then released them ― without noses, hands and feet or blinded in the case of the ringleaders. All were expelled from the city. Notably, this punishment, particularly the blinding of opponents and rivals, has a long tradition in the Eastern Roman Empire, but none at all in northern France. In short, even in his rage, Baldwin of Boulogne had adapted the customs of his adopted father.

Nor did his “brutality” provoke outrage or rebellion. On the contrary, the chronicles record with what amounts to approval that Baldwin was now “feared.” The Armenian church and population appears to have welcomed the restoration of a really strong strongman, capable (they hoped) of ending the fragmentation and lawlessness in the region that had followed the defeat of the Byzantine army at Manzikert.

Baldwin of Boulogne had no chance to prove himself. He was called away to Jerusalem to take up his elder brother’s mantle. He was crowned King of Jerusalem in the Church of the Nativity on Christmas Day 1100. He did not just abandon Edessa, however. Instead, he invited his cousin Baldwin de Bourcq to succeed him as ruler of Edessa. Baldwin II (as he was to be known in both Edessa and Jerusalem) was quick to take the opportunity, and his eighteen-year rule in Edessa truly established Frankish control over Edessa.

It was Baldwin II who extended Frankish power beyond the city of Edessa into the surrounding region. This was no easy task as various warlords held castles at strategic points ― some Christian, some Muslim. He, like Baldwin I, had too few Frankish troops to impose his rule. He was dependent on the goodwill of the bulk of the ruling class and the loyalty of Armenian soldiers to remain in power, much less extend it. Significantly, he never faced any rebellion in Edessa itself.

Baldwin II adopted much the same tactics as his cousin Baldwin I. He promptly married an Armenian wife, daughter of one of the strongest warlords. Other Franks in his entourage, significantly his cousin Jocelyn de Courtenay who would succeed him when he too went to Jerusalem to become king there, also married Armenian aristocratic women. Equally important, he continued to depend largely on local Armenian elites to administer his territory. However, an early incident in which he lost a key city to Turkish forces and had to borrow troops from the crusader Principality of Antioch, induced him to place more of his own relatives in key strategic castles.

Yet as MacEvitt documents, this was not the same thing as “oppressing” much less “exterminating” the local elites. Rather, Baldwin sent a clear signal: cooperate or lose you lands. The majority of Armenian warlords preferred to “submit” (nominally) to the Franks than risk seeing one of their Armenian rivals win greater power and authority. So, yes, some of the larger warlords lost out, fled to Constantinople and bewailed their fate to sympathetic ears. Their lament found a voice particularly in the chronicler Matthew of Edessa, but they were a minority. The bulk of the Armenian ruling class, MacEvitt argues, “preferred to trust the Franks rather than others of their own kind.” (The Crusades and the Christian World of the East: Rough Tolerance, University of Pennsylvania Press, 2008, p. 83.) The Franks, in turn, rewarded loyalty, and the Armenians willing to recognize Frankish suzerainty were richly rewarded with new lands, titles and revenues.

Meanwhile, the Frankish leaders and their Armenian wives became increasingly integrated in the local society, honoring local saints, adopting local symbols, titles and customs. MacEvitt sites evidence that local (non-Latin) priests even served as confessors for some Frankish lords. This is a far cry from 18th and 19th Century European colonists “picking up the white man’s burden,” yet meticulously maintaining their “superior” customs while treating the “natives” with condescension bordering on contempt. In 19th century Europe “going native” -- as the crusaders did -- was definitely looked down upon.

Furthermore, this pattern of integration and alliance with local (non-Latin) Christian elites was not only continued under Baldwin’s successors, the Courteneys, but also transferred to Jerusalem when Baldwin II of Edessa became Baldwin II of Jerusalem and his half-Armenian daughter Melusinde succeeded him to the throne. MacEvitt argues, I think convincingly, that the tiny Frankish elite in all the crusader kingdoms was both more dependent and more integrated in Eastern Christian society than previous historians have been willing to admit. His work The Crusades and the Christian World of the East: Rough Tolerance is well worth reading. 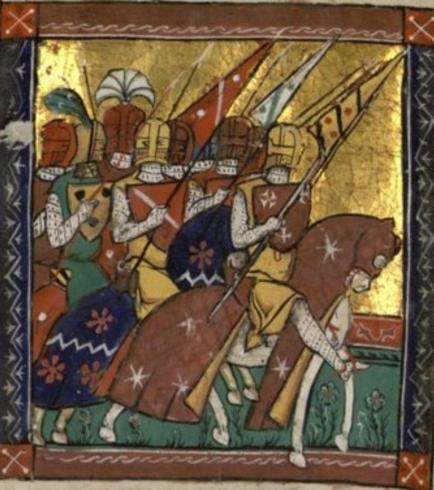 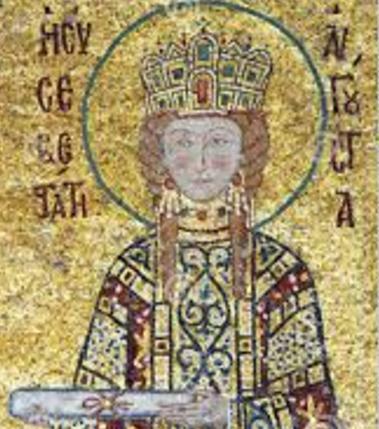