The Damascus Gate of Jerusalem through which Balian d'Ibelin left Jerusalem for the last time after surrendering the city; he led roughly 15,000 Christians to Tyre 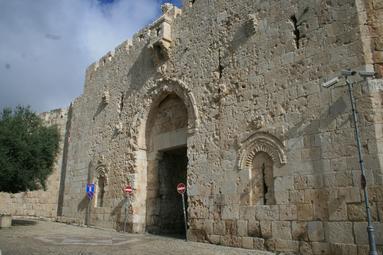 The Hospitaller Castle of Krak de Chevalliers was one of the few castles to successfully defy Saladin. 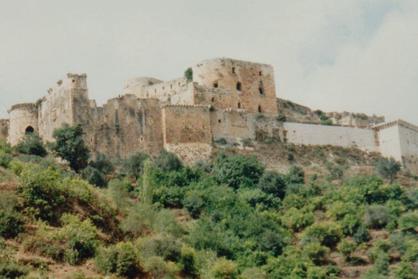 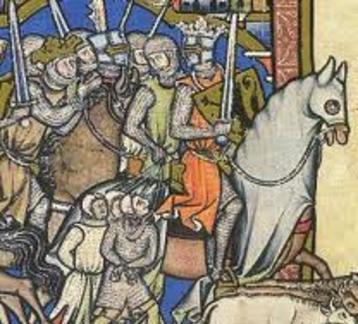 Collapse of a Kingdom: The Aftermath of Hattin, 1187

On July 4, 1187, Salah ad-Din crushed the Christian army under the command of Guy de Lusignan. Of the estimated 20,000 infantry, 1,600 knights and maybe as many as 8,000 light cavalry (Turcopoles) who fought at the battle, only some 3,000 infantry and perhaps 300 knights escaped the carnage as free men. The remainder were either killed or captured.

On July 5, TIberius, despite being virtually impregnable, surrendered. Five days later the economic heart of the Kingdom, Acre, likewise capitulated without a fight. On July 26, the castle of Toron followed, and just three days later Sidon too surrendered. On August 6, Beirut capitulated -- all without a fight. Meanwhile, although the exact dates are unknown, Nablus, Nazareth, Haifa, Hebron, Caesarea, Arsur, Lydda, Ramla, Mirabel, Ibelin and Bethlehem all fell bloodlessly to the Saracens in the months immediately following the Battle of Hattin. Only at Jaffa and Ascalon do we hear of "fierce" resistance. Although the fight at Jaffa was so bitter that al-Adil allowed his troops to plunder and enslaved all the surviving inhabitants, by September 5 -- just two months after the Battle of Hattin -- only two cities in the entire Kingdom remained in Christian hands along with a handful of isolated castles.

Salah ad-Din next concentrated his forces at Jerusalem. Despite a spirited defense led by Balian d'Ibelin, which included a number of successful sorties out of the city and one of which drove the Saracens all the way back to their camp and forced them to redeploy, the walls were breached by mining on September 29. Ibelin was forced to surrender the city and only his diplomatic skills saved the bulk of the survivors from slavery; they were instead allowed to buy their freedom at a fixed price of 10 dinars per man, five per woman and two per child. On Oct. 2, Salah ad-Din's army entered the Holiest City in Christendom. It was less than three months since the disaster at Hattin.

Only the coastal city of Tyre remained Christian in all of what had once been the Kingdom of Jerusalem.

This rapid and largely bloodless surrender of city after city has led many superficial observers and casual students to conclude that the Kingdom of Jerusalem was fundamentally "rotten at the core." That it was inherently unsustainable. Even that the native population was indifferent to or "welcomed" the return of Muslim rule. None of that is true. The Kingdom of Jerusalem collapsed because it was indefensible.

King Guy had issued the equivalent of the “levee en masse” of the Napoleonic era, the arriere ban, and every able-bodied fighting man had mustered at Sephorie. Left behind in the castles, towns and cities were women, children, the old and the ill. There were no garrisons capable of offering an effective resistance. Worse, even if there had been, there was no point to resistance since there was no army capable of coming to the relief of a city under siege.

Thus when Saladin’s army appeared before the walls of one fortress or city after another, the citizens had the choice of surrender in exchange for their lives and such valuables as they could carry or hopeless resistance. Since the rules of contemporary warfare dictated that resistance justified massacre, rape and enslavement, it is hardly surprising that the Christian cities and castles capitulated one after another. What is surprising is that some cities -- Jaffa, Ascalon, Jerusalem and Tyre -- defied Saladin despite the hopelessness of their situation. Particularly the defense of Jerusalem is a tribute to Christian -- not just Latin Christian -- love for their freedom and their country: the Holy Land.