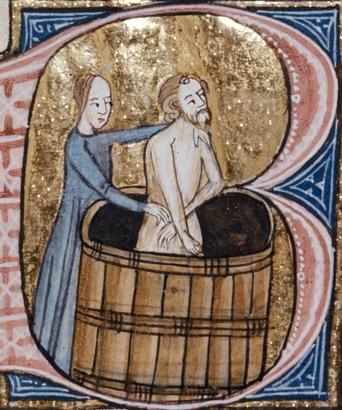 A scene from "The Kingdom of Heaven" 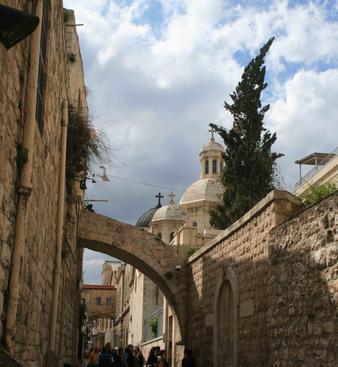 The buildings of Jerusalem, then as now, were built of stone. 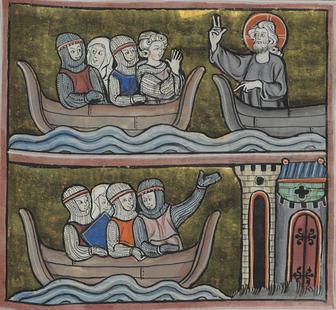 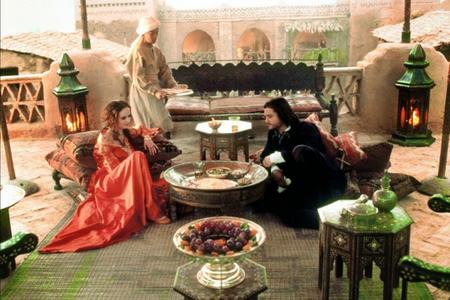 Throughout the existence of the crusader states, pilgrims from the West flocked to the Holy Land, some in search of salvation, some simply “sight-seeing,” and some as “armed pilgrims” to offer their sword (or bow or axe) in the defense of the Christian territories. Many of these pilgrims wrote accounts of their travels, and many chroniclers in the West, whether they had personally been there or not, included impressions of the Holy Land obtained at second hand in their works. From the mid-12th century on, a hefty strain of critique and censure of the settlers in “Outremer” runs through many of these works. Each defeat, each unsuccessful crusade, was routinely attributed to the sins of those involved: that is the crusaders and the residents of the Holy Land.

By the Third Crusade Westerners clearly viewed the residents of Outremer with suspicion. No previous set-back was comparable to the loss of the entire kingdom, including, obviously, the most sacred site of all, Jerusalem. Although men flocked to take the cross and the largest armies led by the most prominent rulers ever, before or after, set out on the Third Crusade, their objective was to rescue the Holy Land — not the kingdom or people who had occupied the Holy Land since the First Crusade. On the contrary, most of the crusaders appear to have blamed the residents of Outremer collectively (rather than just Guy de Lusignan personally) for losing the Holy Land. These people were at the latest by this time given the derisive name of poulain, which derives from the French for foal and imputed mixed blood. They were viewed as the sinners to blame for the catastrophic loss, which the (by inference) virtuous men from the West now needed to recapture.

These were the beliefs held before setting out on crusade, but they were reinforced by confrontation with life in Outremer.

The first problem was the widespread use of stone building materials, something that was still pretty much a luxury in the West, which made the cities of Outremer appear exotic to the pilgrim arriving by sea seem exotic before he or she even set foot on land.  Admittedly, those coming by land would have already adjusted to the use of stone and brick. Still, the physical differences in the architecture and the heat of the summer sun (most pilgrims came in the spring and departed in the fall), undoubtedly created a sense of being in a very different world, and most people are suspicious of things that seem very different from home.

The second problem, of course, was that the majority of the natives (Orthodox Christians, Jews and Muslims) dressed in “oriental” styles. Although the Latin elites still followed Western fashion for the most part, the climate alone dictated some adaptation of Western clothing. In temperatures approaching 40 degrees Centigrade (100 degrees Fahrenheit), it was unthinkable to wear the heavy furs and wools, or the layers of clothing common in the West. While Latin women never adopted “the veil” in the Arab tradition of black robes completely concealing a woman’s figure including arms and face, Latin women would certainly have protected their faces from the ravages of the Palestinian sun with sheer silks, probably short enough to be thrown back over their head when indoors.  More shocking to the new-comers, however, the same even the same fashions if worn in gauze and silk rather than wool and linen would have resulted in gowns that clung and revealed more of the female figure. Meanwhile, while neither knights nor sergeants went around in turbans and kaftans (as some modern writers would have you believe), again the fabrics used for shirts, tunics, hose and surcoats would have been considerably lighter and sheerer than fabrics in the West. Easy access to some of the more powerful dyes (saffron for yellow, the sea snails (porphyra) for purple, etc.) may have made these clothes brighter and more vivid as well. The result was undoubtedly a somewhat mind-boggling mixture of styles and colors that seemed extravagant and exotic to the newcomer.

The third problem was the discovery that the majority of the population in Outremer, including the Orthodox Christian natives, spoke Arabic. Regardless of religion, this was the lingua-franca of Outremer, used by merchants across the region alongside Greek. The poulains born in Outremer, living side-by-side with Arabic speaking neighbors in the cities, trading with Arabic-speaking shopkeepers, or even lords dealing with Arab-speaking tenants and servants all had to acquire a degree of competency in Arabic just to conduct daily business.  To more recent arrivals this command of the “enemy’s” language smacked of treason. The fact that many Latin Christians, who had come out as crusaders, later married Arabic- or Greek-speaking women reinforced the impression of ambiguous loyalty on the part of the poulains.

At a minimum, it created suspicion simply because the newcomers could not hope to understand it based on an understanding of Latin, the lingua-franca of the West.

This suspicion had been reinforced over the decades leading up to the Third Crusade by the series of truces the Kings of Jerusalem had made with their Muslim counterparts. While the residents in the crusader states recognized the sheer tactical utility of periodic truces and pauses in the fighting, newly arrived crusaders were often appalled to think they had come so far to fight the Saracens, only to be told “oh, well, thanks for coming, but at the moment we have a truce and aren’t fighting them.” Such armed pilgrims returned home embittered and told stories about how the poulains had “sold out” to the Saracens.

Another source of friction between Western visitors and permanent residents of the crusader states was the apparent “wealth” of the natives. As early as 1125, Fulcher of Chartres, one of the chroniclers of the First Crusade, had written that in the crusader states “he who was poor [at home in the West] attains riches here. He who had no more than a few deniers finds himself here in possession of a fortune. He who owned not so much as one village finds himself, by God’s grace, the lord of a city.” (Cited in Bartlett, Downfall of the Crusader Kingdom, p. 189.) Fulcher was trying to recruit settlers, and was doubtless exaggerating, but perception sat deep. Because the Latin Christians in the crusader states were integrated into the upper and middle levels of society while the very bottom rungs were filled by native Christians or Muslims, travelers to the crusader states from the West was more likely to encounter and interact with men and women from a higher strata of society.  Furthermore, because items that were outrageously expensive in the West were produced in the crusader states (silk, glass, sugar, citrus fruits, pomegranates) these “luxury” items were accessible to people much farther down the social scale than in the West. Visitors were undoubtedly aghast to find common laborers and soldiers enjoying lemons and sugar, or wearing, if not pure silk, some of the mixed textiles that used silk with cotton or linen.

And then there was the issue of bathing. Not that bathing was not an integral part of Western culture in this period; it was. But in the West bathing was considerable more difficult and less convenient, at least during the winter months when a bath could only be enjoyed if the water was first heated up, than in Outremer. Furthermore, for the upper classes, bathing was a private affair — a tub carried up to a bedchamber, filled with buckets of water hauled there by servants, and attended upon by a wife, daughter or squire. In the crusader states the public bath-houses of the Greeks and Romans had been taken over, rebuilt and supplemented by those of the Arabs and Turks. Bathing was not only easy and cheaper in a climate where the cooler was better most of the time, but also a public affair with professional bath attendants rather than retainers and family in attendance. The public baths in the tradition of the Greeks, Romans and Turks included massages with fragrant oils rubbed into the skin. All of this smelled, particularly to clerics, like “dins of iniquity” reminiscent of Jezebel, Salome and the Queen of Sheba.

Last but not least, the culture of West Europeans clashed with the culture of the crusader states because the crusader states were heavily urbanized and cosmopolitan at a time when most Western kingdoms were still predominantly rural and parochial. The poulains had little choice but to be tolerant of different customs, clothes, foods and even religions because they were surrounded by these things. To survive they traded with Cairo and Damascus, Aleppo and Byzantium. Jews were allowed to live throughout the kingdom except in Jerusalem itself. Muslims likewise lived, and were allowed to follow their religion across the kingdom, again with the exception of Jerusalem itself. Muslims even had the right to the haj in some cities such as Nablus. Although taxed more heavily, neither Muslims nor Jews were subject to persecution, and some enjoyed wealth and administrative power. This was quite simply because poulains, who never made up more than 20% of the population, could not afford bigotry in any regard. Yet that very tolerance struck many newcomers as near-heresy. It was a short step from being scandalized at poulain tolerance and jealous of the poulain wealth to seeing in the poulains the sinners to blame for all the disasters that had befallen the Holy Land — reinforcing all the prejudices which with the crusaders had sailed from the West.

Pilgrims travelling as depicted in a Medieval manuscript.

Clash of Cultures: Crusaders vs. the Settlers in the Crusader Kingdoms