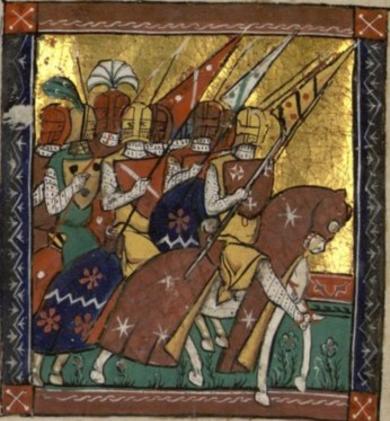 Medieval depiction of a merchant caravan in the Middle East. 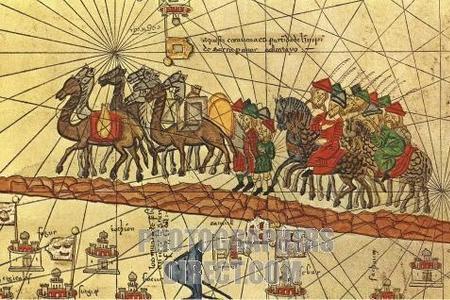 A Hollywood depiction of the "True Cross" carried in battle by forces of the Kingdom of Jerusalem, here at Hattin in the film "The Kingdom of Heaven." 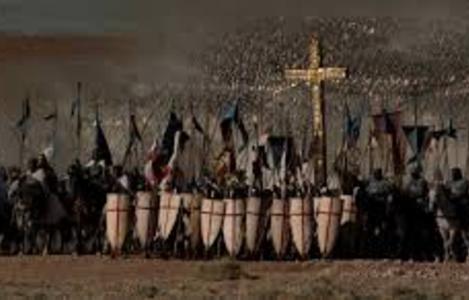 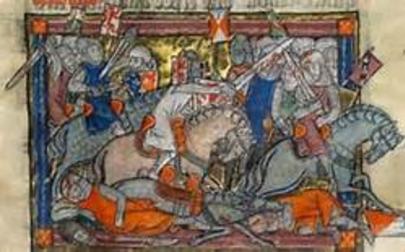 In much popular literature, the Sultan Salah ad-Din, more commonly known as Saladin, is portrayed not only as chivalrous but also invincible.  Even his critical biographer, Andrew Ehrenkreutz, attributes Saladin’s failure to defeat the forces of Christianity sooner than 1187 to Saladin’s obsession with crushing his Muslim rivals rather than to any capability on the part of his Christian foes.  While it is undoubtedly true that Saladin spent more time and resources defeating his Muslim rivals, the theory glosses over the fact that Saladin led three full scale invasions of the Kingdom of Jerusalem before his successful campaign of 1187 — and he was defeated each time. Furthermore, in all three instances he commanded significantly more numerous forces and was forced to withdraw by smaller forces of Christians.

Saladin’s first invasion ended in a crushing defeat in the Battle of Montgisard. His second invasion was not launched until five years later in the summer of 1182.  Significantly, this invasion occurred after the death of the Byzantine Emperor Manuel I, who had been a staunch supporter of the crusader kingdoms. Under Manuel I, the Christian Kingdoms in Constantinople and Jerusalem had undertaken a number of joint military operations, notably against Egypt, and the Byzantine Empire provided the crusader kingdoms with a degree of protection. However, with Manuel I’s death and the assassination of his wife, daughter and son-in-law, the minor Emperor Alexius II was controlled by a clique completely hostile to the Latin kingdoms.  It was furthermore launched after Saladin had concluded a truce with the Norman Kingdom of Sicily. In short, the Kingdom of Jerusalem was isolated and could expect no short-term support.

Saladin’s forces crossed into the Kingdom of Jerusalem on July 13 and immediately laid siege to the castle of Bethsan in southern Galilee on the River Jordan. Due to the nature of medieval warfare, i.e. the slow speed at which large forces can be mustered, Saladin’s intentions had not remained concealed. Far from surprising the King of Jerusalem, Saladin’s invasion was anticipated and the King had already called up his feudal levies and mustered them at the Springs of Sephorie (also written Saffuriya). While the Christians had shorter lines of communication and could probably muster more rapidly than Saladin’s diverse forces drawn from as far away as Cairo, the fact that the Christians had already mustered before Saladin’s army crossed the Jordan nevertheless speaks of considerable competence on two levels.

On the one hand, the Kingdom of Jerusalem evidently enjoyed excellent intelligence of enemy movements, and on the other the King’s subjects were capable of a rapid response. The extent to which the Christians had reliable intelligence networks inside Saladin’s empire is something almost completely overlooked or neglected in most studies of the crusader kingdoms. Good intelligence is, of course, by its very nature almost invisible. Furthermore, it was only in the second half of the last century that spy thrillers became popular and the importance of intelligence widely recognized. For most of human history, spies have been despised as somewhat unsavory (not to say dishonorable) creatures, whose services were used but not valued. This may explain why no Christian chronicle highlights or even acknowledges the fact that the Christian kingdoms did have access to intelligence from inside the Muslim world. There were two important sources of this intelligence. First and foremost, traders who, we know, did travel across the cultural and religious borders of the age almost irrespective of the state of hostilities. Second, and perhaps even more important, were the large communities of Christians who lived in both Egypt and Syria at this time.

The second fact, that Baldwin IV could muster his forces rapidly when he summoned them, has also received far too little acknowledgement. For a Kingdom that so many describe as divided by factions and intrigue (see Ehrenkreutz, Bartlett, and others) that is quite remarkable. In fact, the ease and speed with which the feudal levies of Jerusalem mustered undermines the thesis of internal divisions — at least at this point in time.

Just two days after Saladin laid siege to Bethsan, the Christian army under King Baldwin IV confronted Saladin’s army in a bitter, full-scale battle. William of Tyre, who was Chancellor of the Kingdom of Jerusalem at this time and could rely on first-hand accounts of the battle, reports that the older, more experienced Frankish commanders claimed never to have seen a Saracen force of this magnitude before, but there are no reliable estimates of just how large that force actually was. Five years later, however, Saladin mustered roughly 45,000 troops for the campaign that led to his victory at Hattin, including 12,000 cavalry. It is probable that Saladin’s army in 1182 was somewhat less numerous than at Hattin, simply because Saladin had not yet subdued his rivals in Mosul and so could not call on their contingents.  An educated guess might therefore put his army at as little as 35,000 of which 9,000 were horse.  On the Christian side were just 700 knights (compared to 1,600 at Hattin) and unknown numbers of Turcopoles and infantry. Again, using Hattin as a yardstick, and paring the numbers down proportionally, the Christian infantry probably did not number more than 10,000, probably less.

The battle was fought in such intense heat that a monk died of sunstroke while carrying the reliquary containing what was believed to be a fragment of the cross on which Christ was crucified. The battle was, furthermore, an all-day affair, and the dust churned up on a battlefield in the midst of the summer dry season must have been nearly as unbearable as the heat. What fighting in metal armor under these conditions was like is literally unimaginable to modern man. It is probable that heat stroke and thirst contributed nearly as much as enemy action to the casualties.

Unfortunately, there is no detailed account of the sequence of events; Tyre was a churchman, not a soldier, and the Arabs had “nothing to write home about.”  As Professor Bernard Hamilton words it: “Le Forbelet was a Frankish victory: a far larger Muslim army had been forced to retreat with heavy losses by a determined Frankish cavalry force.”

The few facts we do have, however, suggest that Hamilton may be slighting the Christian infantry in his above assessment. While there were practically no casualties among the Christian knights, the losses among the infantry were reportedly much greater. This suggests that the Frankish cavalry remained behind their infantry protection long enough to wear-down their enemy and then — still comparatively fresh — they launched an effective counter attack. These are the tactics that worked so well for Richard the Lionheart during the Third Crusade, and they weren’t new. These were the tactics the Franks had used again and again. It all came down to disciplined infantry that held the line, timing the cavalry charge correctly, and then carrying it out with verve and discipline. From the outcome, it is clear that the Christian forces at Le Forbelet did all three.

That would not have been possible without effective command, and clearly that still lay with Baldwin IV at this time. He was present at the battle, but after being unhorsed at the Battle on the Litani and given the ravages of three more years of leprosy, it is almost certain he did not lead his army from horseback at the front. Rather, as in the following year, he was probably reduced to commanding from a liter at the back of his army. That despite this he could still defeat an army likely three times the size of his and commanded by the tactically astute Saladin suggests on the one hand that he still commanded the respect of his barons and troops, and on the other that he had some very competent field commanders.

The small number of Frankish knights involved is attributable to the fact that the forces of neither Tripoli nor Antioch took part in this battle, both being pinned down elsewhere. So the most probable commanders at Le Forbelet were all from the Kingdom of Jerusalem, first and foremost, the Constable of the Kingdom, Aimery de Lusignan, followed by Reynald de Châtillon, Lord of Oultrejourdain, and Baldwin d’Ibelin, Lord of Ramla and Mirabel. Both of the latter had very strong reputations as battle commanders and fielded large contingents of troops.

Whoever deserves the credit, the victory proved fleeting. Baldwin’s successor, Aimery’s younger brother Guy, failed to follow the tactics that had worked so well at Le Forbelet. He led the Christian army to a devastating defeat just five years later — almost to the day — at Hattin. That was a defeat from which the crusader states never recovered, and so it obscured and turned to insignificance the crusader success at Le Forbelet.

The Battle of Le Forbelet is described in detail in Book II of my three-part biographical novel of Balian d’Ibelin, Defender of Jerusalem.
BUY NOW IN PAPERBACK!

The Battle of Le Forbelet