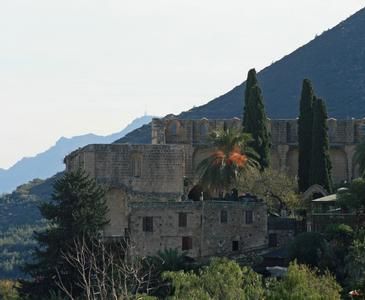 In 1188, with almost all of what had once been the Kingdom of Jerusalem under his control, Saladin released the Lusignan brothers. Guy promised never to take up arms against Saladin again, and he may also have promised to deliver the remaining strongholds of his former (nominal?) kingdom to the enemy. Whatever the terms were, Guy did not respect them, and we can assume that Aimery followed his lead.

Guy and Aimery (in the company of the Templar Grand Master Gerard de Ridefort) went to Antioch, the only Crusader kingdom that was still more or less in-tact and there raised some 700 knights and 9,000 other ranks to continue the fight against Saladin and re-capture his lost Kingdom.  Meanwhile, Guy and Aimery’s older brother, Geoffrey, had arrived from the West and was in Tyre. Guy, naturally, headed for the last free city of his kingdom with his new force of knights and men. However, the man commanding the defense of Tyre, Conrad de Montferrat, refused to admit him. Guy de Lusignan was persona non grata in his own kingdom!

Geoffrey de Lusignan, however, knew that a major Western force under the command of the Kings of England and France was collecting in the West and would eventually arrive. He advised Guy to “take action.” It was obvious to Guy’s elder brothers, both Geoffrey and Aimery, that Guy would lose the last shreds of respect and support if he did nothing. So Guy went with his knights and men to lay siege to Acre — the most important port of his former kingdom, which had been surrendered without a fight by Joceslyn de Courtney after the Battle of Hattin.

It was an apparently futile gesture, but one that attracted the support of almost any fighting man who was not prepared to accept defeat and every armed Christian who was not prepared to abandon the Holy Land. Holding on to Tyre was critical for survival, but the action was too defensive for many men’s tastes — and there was only so much anyone could do there. So although Guy started his siege of Acre with roughly 10,000 men, the Christian camp around Acre grew steadily, swollen by “armed pilgrims” that set out from the West to recover the Holy Land without waiting for the organized crusade. Guy’s forces soon reached an estimated 30,000 men of which 2,000 were mounted (knights, squires and turcopoles). Key to Guy’s success was support from the Pisan fleet and, later, Danish and Frisian ships as well, which enabled the besiegers to retain lines-of-communication and supply with the West and Antioch.

On Oct. 4, 1189, the Christians made an assault on Acre. Saladin himself was in the city assessing the situation, and a vicious, day-long battle developed.  Close to 5,000 Christians were killed including (finally) the Templar Grand Master Gerard de Rideford, who shared much of the blame for the disaster at Hattin. Yet while they failed in their objective, they also convinced Saladin that his forces were too weak to break the Christian siege either; an 18 month stalemate ensued — punctuated by sporadic attacks. Whenever the Christians attempted to take Acre, the Saracens surrounding them would attack from the rear, forcing them to return to their camp and trenches.

Meanwhile, conditions in the Christian camp deteriorated and morale plummeted. In 1190, disease took the lives of Queen Sibylla and her two daughters by Guy — their only off-spring. With them died Guy’s sole claim to the throne of Jerusalem.

Meanwhile, the Third Crusade was approaching, led by Richard I of England and Philip II of France. Despite past frictions between the Plantagenets and Lusignans, Richard the Lionheart threw his weight behind Guy de Lusignan’s — now weaker than ever — claim to the throne, and (predictably) Philip II of France backed Guy’s rival, Conrad de Montferrat, who had married Sibylla’s younger sister, Isabella, and claimed the crown of Jerusalem through her.

With the forces of the two kings and Richard the Lionheart’s leadership, the siege of Acre was brought to a successful conclusion: the Saracen garrison surrendered and the Christians re-occupied the city. Philip of France then promptly sailed back to France (to make trouble for Richard), but the barons and burghers of Outremer remained vehemently opposed to Guy. So Richard fought Guy's battles for him, but after retaking much of the coastline of the Holy Land and making two unsuccessful attempts to retake Jerusalem, Richard the Lionheart's time ran out. He had to return to his hereditary lands and he therefore had to leave the rump state he had helped create in good hands. But by now, it was 1192, Richard the Lionheart knew that Guy de Lusignan was untenable as King of Jerusalem any longer. . He recognized Isabella as the rightful Queen of Jerusalem and her husband (first Conrad de Montferrat and then Henry of Champagne) as King.

But this is where things get interesting for the Lusignans. On his way to the Holy Land, Richard I had conquered Cyprus. This immensely wealthy island which had long been part of the Byzantine Empire had been seized by a self-proclaimed “Emperor,” whose tyrannical policies had so alienated his subjects that they welcomed and cooperated with Richard of England. Intent on rescuing the Holy Land, however, Richard had not wanted to retain the island for himself and had instead sold it to the Knights Templar. They, however, had proved such oppressive and unpopular overlords that by April 1192 the entire island was in rebellion against their rule.  The Templars, recognizing that they did not have the resources to subdue the Cypriots and regain the Holy Land from the Saracens, returned the island to the King of England.

By now Richard knew that his younger brother John and the King of France were scheming to rob him of his inheritance in England and France. He had no more time for or interest in Cyprus than the Templars did. So he sold it to Guy de Lusignan!

That was all very well for the King of England, but the fact was that with the entire population now up in arms against the rule of the crusaders, Guy first had to (re)conquer the kingdom he had bought. He set off with what few supporters he still had. Curiously, at this stage his brother Aimery did not accompany him. Aimery remained behind in the Kingdom of Jerusalem, where he was still technically Constable. It was a bad move. The new king, Henry of Champagne, was clearly suspicious of his loyalty and when he sided with the Pisans, who Henry suspected of plotting against him, he was promptly imprisoned.

According to Peter Edbury in his history The Kingdom of Cyprus and the Crusades, 1191 – 1374,  Aimery’s arrest “evoked protests from some prominent figures in the kingdom….” This supports my earlier thesis that — in contrast to Guy, who seems to have been singularly adept at making enemies — Aimery was still popular among his adopted countrymen. The fact that King Henry gave in to the protests and released Aimery on the condition that he surrender the office of Constable suggests that Aimery’s supporters were very influential indeed. I can’t help but suspect that they included Balian d’Ibelin, who was King Henry’s de jure father-in-law (he was married to Queen Isabella’s mother). Balian was the leading baron in Henry of Champagne’s kingdom — and Aimery’s wife Eschiva was Balian’s niece. Aimery duly surrendered his office of Constable of Jerusalem and promptly went to Cyprus to assist his brother Guy in taking control of his new lordship.

Less than two years later, Guy de Lusignan was dead. Notably, he designed his elder brother Geoffrey — not Aimery who had been with him so long and through so much — as his heir. The record is far too sketchy to know why, but there may have been tension between the brothers all along. Aimery’s support of his brother, as I noted before, was not necessarily indicative of genuine approval of his policies or actions, but rather the imperative of family loyalty and self-interest. Fortunately for Aimery, Geoffrey de Lusignan had no interest in Cyprus. So Guy’s vassals chose Aimery as his successor.

Within three years of becoming the Latin/crusader overlord of Cyprus, Aimery had established peace on the island, set up a Latin ecclesiastical hierarchy alongside the Orthodox one (evidently following the model in the earlier crusader states that allowed the inhabitants to follow their own faith but giving the Latin clergy valuable properties), and raised Cyprus to the status of a kingdom. Thus while Guy de Lusignan was “Lord of Cyprus,” Aimery was “King of Cyprus.” He obtained the dignity of kingship by offering to do homage for Cyprus to the Holy Roman Emperor. This was to cause trouble for his successors and lead to a bloody civil war a generation later, but Cyprus remained a Kingdom for nearly 300 years — ruled by the direct descendants of Aimery de Lusignan

Nor was that the end of his astonishing life. In 1197, his first wife Eschiva d’Ibelin died having given him six children, three of whom had lived to adulthood. The eldest son of this marriage, Hugh, was now his heir apparent and would in due time inherit the Kingdom of Cyprus. When Henry of Champagne died in the same year, however, Aimery was selected as her fourth husband, allegedly with the “almost unanimous” support of the barons and bishops of the rump-state of Jerusalem.

Aimery promptly used his Cypriot resources to help strengthen his new kingdom. In the same year that he assumed the crown of the kingdom his brother had squandered, he recaptured the key coastal city of Beirut from Saracen control with the support of German crusaders as well as his Cypriot forces. The following year, he concluded a five year truce with the Saracens that gave the kingdom much needed breathing space to retrench and consolidate itself. It was also the year in which he named Balian d’Ibelin’s son John to the prestigious position of Constable of Jerusalem — the position Aimery himself had held for over a decade, and an exceptional mark of favor for a young man not yet 20. One presumes this was more a gesture of gratitude to his father than a mark of confidence in one so young.  (John was later to swap the constableship for the lordship of Beirut.)

In 1204, with the Fourth Crusade diverted to Constantinople, Aimery concluded a new truce with the Saracens with a six year duration. This gave his kingdom the peace it needed for economic recovery, but he did not live long enough to enjoy it.  In February 1205, his son by Queen Isabella — the only son she ever had — died, and Aimery followed him to the grave within two months and Isabella shortly afterwards.  The crown of Cyprus passed to his son Hugh, and the crown of Jerusalem to Isabella’s oldest surviving child, her daughter Maria of Montferrat.

Aimery de Lusignan was King of Cyprus for eleven years and King of Jerusalem for eight — twice as long as his brother Guy had been. To both kingdoms he had brought stability and peace. His reign was looked back upon by subsequent generations as one of justice and prosperity — in both kingdoms. 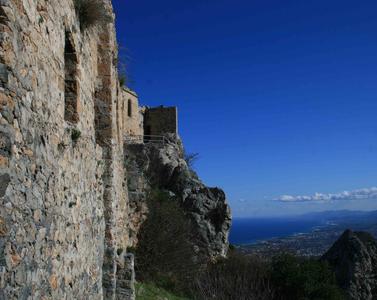 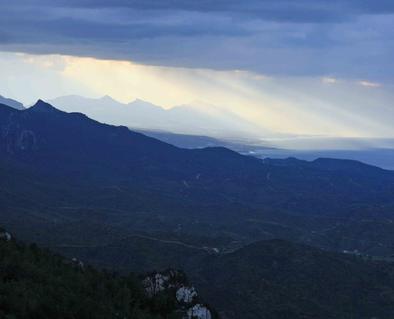 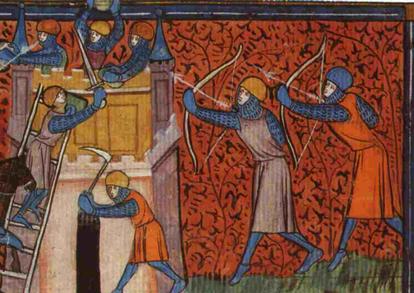 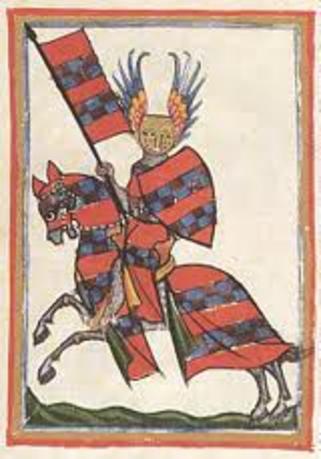