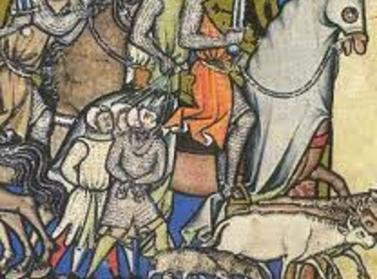 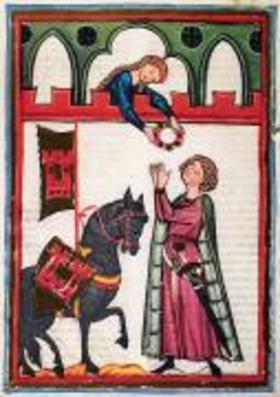 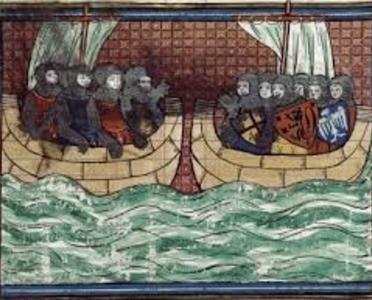 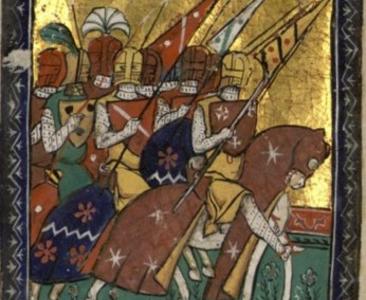 Guy de Lusignan is rightly remembered as the king who lost the Kingdom of Jerusalem by his incompetent leadership in 1186-1187. He has accordingly received considerable attention in both serious histories of the crusader kingdoms and fictional treatments of the period. But Guy was not the only Lusignan to make his fortune in the Holy Land. On the contrary, he was following in the footsteps of his older brother Aimery, and it was Aimery, not the feckless Guy, who founded a dynasty.

Aimery de Lusignan was the third son of Poitevan nobleman, Hugh VIII de Lusignan, a troublesome vassal of the Dukes of Aquitaine. The Lusignans had been lords of Lusignan since the early 10th century and Counts of La Marche since 1091, but in 1166 they were in revolt against their liege lord (Eleanor of Aquitaine) and siding with the Capets against the Plantagenets. It was in this period that the “Lusignan brothers” — some sources say Geoffrey and Guy, the second and fourth sons of Hugh VIII — attacked and killed the Earl of Salisbury while he was escorting Eleanor of Aquitaine. Since Salisbury was unarmed, unarmored and stabbed in the back, it was a notorious act, which according to some sources forced Guy to flee the continent as persona non grata. Curiously, Aimery’s name is never linked to the murder of Salisbury, yet it was Aimery who first went to the Holy Land.

Aimery was following in the footsteps of generations of young noblemen who sought their fortune “overseas” — in Outremer, and his own family had a distinguished crusading record. Hugh VI had come to the Holy Land in 1101 and died at the Battle of Ramla a year later.  Hugh VII took part in Louis VII’s Second Crusade, and Aimery’s own father, Hugh VIII, had made a pilgrimage to the Holy Land in 1163, taken part in the Battle of Harim, been captured by Nur ad-Din and died in a Muslim prison. In short, Aimery would have heard a great deal about the Kingdom of Jerusalem from his family and their retainers long before he ever set out. Very likely, there were also many men in Outremer who would have remembered his father and grandfather.

Sometime before 1174, Aimery de Lusignan arrived in the Kingdom of Jerusalem and, like his father before him, promptly got himself captured by the Saracens. Fortunately for him, King Amalric was prepared to pay his ransom.  This suggests either that the King felt responsible for the young nobleman – or perhaps just badly that his father had died in prison.  It also suggests that Aimery was an agreeable enough young man not to have alienated the knights and barons of Jerusalem.

This assessment is reinforced by the fact that, despite being a younger (third) son, he succeeded in marrying into one of the most important and influential of the local baronial families, the Ibelins.  This was not the usual case of a Western adventurer seducing a widow as his bride Eschiva was probably only a young girl at the time, and the marriage was concluded with her father, the powerful Lord of Ramla and Mirabel.  Furthermore, although at the time of this marriage Eschiva d’Ibelin was not yet her father’s heir, the marriage would have been considered advantageous nevertheless as it made Aimery brother-in-law to man whose combined baronies owed 80-some to the feudal army.

By 1180, Aimery had been named to the immensely powerful and important post of Constable of Jerusalem, succeeding the well-respected local baron Humphrey II of Toron, who had died of wounds received at the Battle on the Litani in 1179. This promotion occurred in the reign of Baldwin IV and according to the Chronicle of Ernoul it was attributable to the influence of Agnes de Courtney, the king’s mother, with whom — again according to Ernoul — Aimery was having an affair. If Aimery was married to a child (Eschiva), there would have been nothing unusual about him having an affair with an older woman, but this was also the year in which his younger brother Guy arrived in Jerusalem and married Princess Sibylla in great haste.

There are a number of versions of Guy’s marriage to Sibylla incidentally, one of which includes Aimery travelling to France to fetch Guy for the express purpose of seducing Sibylla. This can be dismissed as nonsense simply because at the time of Aimery’s alleged trip, Sibylla was betrothed to the Duke of Burgundy — not the kind of man a Lusignan would risk alienating. Alternatively, Baldwin IV married his sister to the wholly unsuitable Guy to forestall a coup d’etat planned by Raymond of Tripoli, Bohemond of Antioch and Baldwin d’Ibelin, an equally implausible thesis, in my opinion, because it imputes treasonous intentions to three barons who repeatedly risked their lives as vassals of Baldwin IV; these noblemen had had many other opportunities to conduct a “coup,” but did not. The most plausible explanation of Sibylla’s wedding is quite simply that she fell in love with/was seduced by Guy, and her brother King Baldwin didn’t have the heart to punish her and her lover; instead let them marry despite the fact that in alienated many of his vassals. With Guy married to the heir to the throne, however, Aimery’s future appeared secure, and it is most probable that he was appointed constable due to the influence of his brother rather than that of Agnes de Courtney — whether he was her lover or not.

Regardless of how he came to the post, Aimery acquitted himself well as constable. He would have been the effective commander of the feudal army at the Battle of La Forbelet, because Baldwin IV was by this time confined to a litter. In short, although the King was “in command” and making the strategic decisions, it was his Constable, Aimery de Lusignan, that rode with the royal banner and actually led, rallied, held, inspired and corralled the royal forces. We know he did this effectively because the Christians forced the Saracens to withdraw after La Forbelet — and any failure on Aimery’s part would have been duly noted.

One year later, during Saladin’s invasion of 1183, when his brother Guy managed to earn the enmity and contempt of the entire feudal leadership of his future kingdom, Aimery was the only commander who successfully engaged the Saracens. When Saladin tried to seize control of the important springs of La Tubanie, Aimery — supported by the Ibelins — successfully beat-off the attack. It is notable, that the Ibelin brothers, who were inveterate opponents of Guy de Lusignan, are seen here cooperating closely with Aimery. Aimery was, Guy or no Guy, still Baldwin d’Ibelin’s brother-in-law and ties of blood and marriage were very strong in this period.

Unsurprisingly therefore, Aimery is listed as one of his brother’s closest allies and supporters during Guy and Sibylla’s coup d’etat in 1186.  It was in his interest to do so and any other behavior would have been highly abnormal. It does not imply, however, that he thought highly of his brother or his brother’s leadership. This was simply a matter of family loyalty and self-interest.

And it took him to the Horns of Hattin, humiliating defeat and captivity.  He was with his brother when King Guy surrendered, and went with him into Saracen captivity. As the Lusignan brothers and most of the other barons of Jerusalem moldered in a Saracen prison, the entire Kingdom of Jerusalem fell city by city and castle by castle to Saladin until only the city of Tyre and isolated castles still held out. There was now no kingdom from which to raise a ransom, and Aimery’s wife had also lost her inheritance to Saladin’s forces.

As 1188 dawned, Aimery de Lusignan must have expected he would suffer his father’s fate and die in Saracen captivity. It would have been very hard for him to envisage that one day he would be a king and found a dynasty that would last roughly 300 years. (See: Aimery de Lusignan II, King of Cyprus and Jerusalem.)