Agnes de Courtenay is without doubt one of the women in the history of the Kingdom of Jerusalem who played a decisive — not to say sinister — role. She is an example of how women exercised power in the 12th century crusader kingdoms, and a reminder that female influence was not always benign.

Agnes de Courtenay was the daughter of the powerful Courtenay family. The French Courtenay’s were of distinguished enough lineage for a daughter of the family to marry the younger brother of King Louis VII of France. In the crusader kingdoms the family derived its importance from the fact that Joscelyn de Courtenay was a first cousin of the Baldwin de Bourcq, one of the leaders of the First Crusade, who had been Count of Edessa before he was elected King of Jerusalem to rule as Baldwin II. At Baldwin de Bourcq’s elevation to King, he invested his cousin Joscelyn de Courtenay with his former County of Edessa, which he ruled as Joscelyn I.

However, under his son Joscelyn II, the County was over-run and lost to the Saracens, in large part due to the neglect and poor leadership of Joscelyn II. The city of Edessa was lost to Zengi in November 1144, and by 1150 the last remnants of the once rich and powerful County were in Saracen hands. Joscelyn II himself was captured in the same year by Nur al-Din and tortured. He eventually died, still in captivity, in 1159. Thus his son, Joscelyn III of Edessa inherited his father’s title — but none of the lands or income that went with it. As titular Count of Edessa he was to prove a singularly ineffective (not to say incompetent) leader, who distinguished himself by getting captured at a disastrous battle in 1164, playing a key part in the usurpation of the even more disastrous Guy de Lusignan, and finally by surrendering Acre to Saladin in haste when it was completely defensible. His sister was Agnes.

Agnes de Courtenay had not had an easy childhood. She had been married, possibly at an early age, to Reynald of Marash, who was killed in battle in 1149. The following year, her father was captured and never seen again. Her family had fallen in six years from one of the richest and most powerful in the crusader states, to “poor cousins” living on a few estates in Antioch that Agnes’ mother had from her first marriage. Agnes was a widow with no land and no dowry. She was also possibly no more than 10 or 12 years old, as she would have had to be at least 8 at her marriage to Reynald.

Under these circumstances, it appears that Agnes languished for some time in her mother’s much reduced household and was eventually betrothed to a man of comparatively obscure origins and only recent prominence: Hugh d’Ibelin. Hugh was the son of an adventurer of unknown origin, Barisan, who had distinguished himself as a knight and administrator in the reign of Baldwin II and been rewarded with the Constableship of Jaffa and then the newly created barony of Ibelin. Ibelin was small. It owed only ten knights to the feudal levee, and Agnes may have felt it was beneath her dignity as the daughter of a count.  In any case, in 1157, sometime shortly after the betrothal, Hugh d’Ibelin was taken captive at Jacob’s Ford.

This left Agnes in a very difficult position. She was probably roughly 17 years of age, penniless, her father was still in a Saracen prison, her brother was probably even younger than she was, and now her betrothed was in captivity as well. She may have assumed he would suffer the same fate as her father and never return. She may have felt vulnerable and desperate, or she may simply have been flattered to find that the King’s younger brother took an interest in her. Whether she was the seducer or the seduced, or whether she was outright abducted (as some historians have suggested; see H.E. Mayer, “The Origins of King Amalric”), sometime in 1157 she “married” Prince Amalric of Jerusalem, then Count of Jaffa and Ascalon.

Agnes proceeded to give the Count of Jaffa two children, a daughter, Sibylla, born in or about 1159 and a son, Baldwin, in 1161. Then in February 1163, her brother-in-law, Baldwin III of Jerusalem, died childless. Amalric as his brother, a young and still vigorous man with experience in war and peace, seemed the most obvious candidate to succeed him. But far from being immediately acclaimed king, Amalric faced serious opposition — because of his wife.  High Court of Jerusalem had such strong objections to Agnes that they refused to acknowledge Amalric as King of Jerusalem unless he set Agnes aside.

Why, we do not know. Officially, the Church suddenly discovered and was “shocked, simply shocked” to discover (after six years of marriage) that Amalric and Agnes were related within the prohibited degrees. But even the highly educated Church scholar and royal insider William of Tyre found this explanation so baffling that he had to do extra research to track down the relationship. The issue of the pre-contract with Hugh d’Ibelin was certainly another canonical ground for divorce, although not explicitly mentioned. However, the objections of the High Court are not likely to have been legalistic in view of the fact that the High Court explicitly recognized Amalric’s children by Agnes as legitimate.  This strongly suggests that the High Court was not uneasy about the legality of Amalric’s marriage but about the character of his wife — or her relatives as Malcolm Barber suggests. Perhaps it was simply the fact that she was a powerful woman, or already a notoriously grasping one, or perhaps, as the Chronicle of Ernoul suggests, she was seen as insufficiently virtuous for such an elevated position as queen in the Holy City. Such speculation is beside the point; the naked fact is that Agnes was found unsuitable for a crown by the majority of the High Court. That’s a pretty damning sentence even without knowing the reason, and that’s not just a matter of “bad press,” as Bernard Hamilton suggests.

Agnes then married (or returned to) her betrothed, Hugh d’Ibelin, and, when he died in or about 1170, married yet a fourth time. For a dowerless woman, that’s quite a record, and suggests she may have had “charms” that are inadequately conveyed by the historical record. She had no children by any of her husbands (or lovers) except Amalaric, and until the death of King Amalric, she had no contact with her children by him.  Even after Amalric’s death, during her son Baldwin’s minority, she appears to have been excluded from the court.

Then in 1176, Baldwin IV took the reins of government for himself and invited his mother to his court. She rapidly established herself here as a key influence upon her son. This was derived from her apparently affectionate relationship with her son, who was by this point obviously afflicted with leprosy.  She travelled with him even on campaigns, and appears to have taken a motherly interest in his health and welfare. Since Baldwin IV was unmarried, Agnes’ influence was all the stronger.  Thus, although she never wore a crown, she was undoubtedly the most powerful woman at court, and by the end of Baldwin’s reign she took part in the sessions of the High Court.

She was also, at this stage in her life, allegedly promiscuous. She would have been in her late 30s when her son invited her back to court and she had been widowed three times. Although technically married to Reginald of Sidon, she is rarely mentioned together with him, and they appear to have lived completely separate lives. While her husband kept to his estates and fought the enemy, Agnes was “at court” where she is said to have had the Archbishop of Caesarea, a native by the name of Heraclius, as her lover. Either after him or simultaneously with Heraclius, she is alleged to have had an affair with Aimery de Lusignan as well.

While her morals are arguably her own affair and modern sensibilities are not greatly offended by a mature woman finding sexual pleasure wherever she pleases, it was Agnes influence on her son that from a historical perspective was reprehensible.  Within a few short years, Agnes de Courtenay had succeeded in foisting her candidates for Seneschal, Patriarch and Constable upon her young and dying son. These were respectively: 1) her utterly underwhelming brother, Joscelyn of Edessa, 2) the controversial figure Heraclius, who may not have been as bad as his rival William of Tyre claims and may not have been Agnes lover as the Chronicle of Ernoul claims, but hardly distinguished himself either, and finally an obscure Frenchmen, also alleged to have been Agnes’ lover, Aimery de Lusignan. Not a terribly impressive record for “wise” appointments – even if Aimery de Lusignan eventually proved to be an able man.

Worse, Agnes also engineered the marriage of not only her own daughter, Sibylla, but of her step-daughter, Isabella, the child born to Amalric by his second wife, Maria Comnena, after Agnes had been set aside. No other actions in Agnes de Courtenay’s life were so detrimental to the welfare of the Kingdom of Jerusalem as these two marriages.  We are talking here about Guy de Lusignan and Humphrey de Toron respectively.

The latter, Humphrey, was a man of “learning,” who distinguished himself by cravenly vowing allegiance to the former after Guy seized power in a coup d’etat that completely ignored the constitutional right of the High Court of Jerusalem to select the monarch, and then promptly got himself captured at Hattin. Although he lived a comparatively long life and held an important barony, he apparently never played a positive role in the history of the kingdom. Not exactly a brilliant match or a wise choice for a future Queen of Jerusalem.

Agnes’ other choice, the man she chose for her own daughter was even more disastrous. At best, Guy de Lusignan was freshly come from France, young, inexperienced and utterly ignorant about the situation in the crusader kingdoms.  At worst he was not only ignorant but arrogant and a murderer as well. (See my entries on Guy and Aimery de Lusignan.)  In a short space of time he alienated his brother-in-law, King Baldwin IV, and he never enjoyed the confidence of the barons of Jerusalem. The dying king preferred to drag his decaying body around in a litter -- and his barons preferred to follow a leper -– than trust Guy de Lusignan with command of the army.

Nor was this mistrust of the baronage in Lusignan misplaced. When Sibylla crowned her husband king and all the barons (except Ramla and Tripoli) grudgingly accepted him, he led them to the avoidable disaster at Hattin. In short, Agnes de Courtenay’s interference in the affairs of the Kingdom of Jerusalem, led directly to the loss of the entire Kingdom.

In retrospect, Agnes de Courtenay was clearly an ambitious woman, who clawed her way from comparative helplessness and impoverishment to become the effective “power behind the throne” of her son. She suffered a number of set-backs in her life, most notably the High Court’s refusal to recognize her as Queen, and she must have been embittered by this. She is credited with hating her successor as Amalric’s wife, the woman who was crowned queen in her place, Maria Comnena bitterly.  The extent to which her subsequent actions were motivated by a consuming thirst for revenge should, therefore, not be under-estimated. Whatever her motives, whether a conscious desire to humiliate those she blamed for her own humiliation or simply a lack of intelligence commensurate to her ambition, her overall impact on the history of the crusader states was tragically negative.

Agnes de Courtenay is an important secondary character in the first to books of my three part biographical novel of Balian d'Ibelin, Knight of Jerusalem and Defender of Jerusalem. 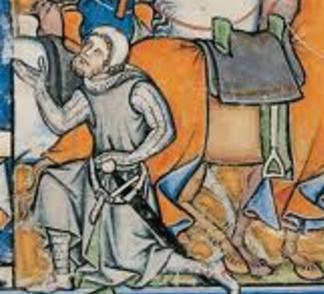 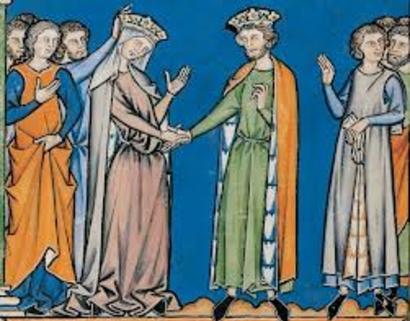 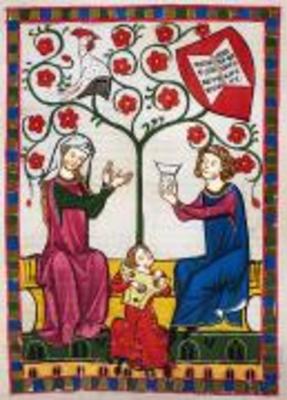 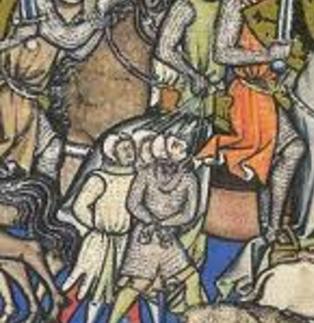 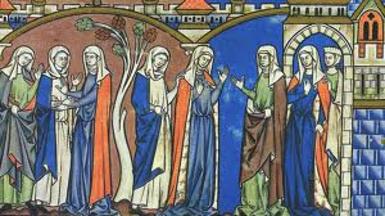