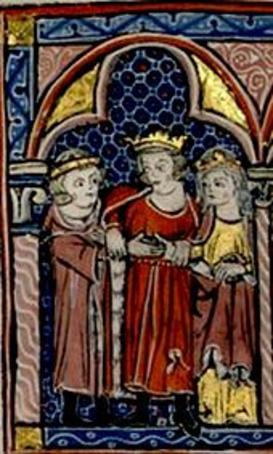 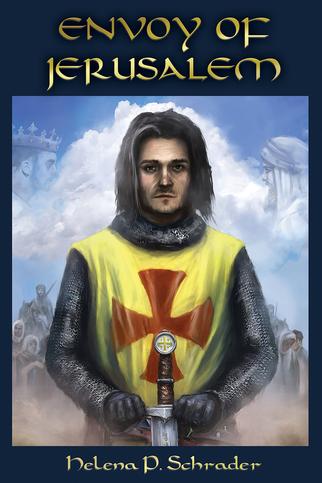 A Curious Proposal for Interfaith Marriage:

One of the most bizarre diplomatic incidents of the Third Crusade was a proposal to re-establish a Kingdom of Jerusalem under Saladin’s brother al-Adil (as king) and Richard the Lionheart’s widowed sister, Joanna (as queen). The idea of a marriage between the Muslim al-Adil and the Christian Joanna, who was the Dowager Queen of Sicily, has long captured the imagination of novelists. None less than Sir Walter Scott wove the incident (modified to Richard’s niece and Saladin himself) into his novel The Talisman. Meanwhile, serious historians have puzzled over Richard’s motives, while the idea of an inter-faith marriage that guaranteed a kingdom of tolerance and peace in the Holy Land mesmerized modern advocates of peace in the Middle East.

But was there such a proposal? And if so, who originated it and why?

The Christian chronicles, notably the Itinerarium Peregrinorum et Gesta Regis Ricardi and the Lyon Continuation of William of Tyre, are completely silent on the proposal — as if it never happened.  John Gillingham in his excellent biography Richard I notes that many historians doubt that the proposal was made or dismiss it as a joke. He then notes that it is mentioned in two of the contemporary Arab sources (Baha ad-Din and Imad ad-Din) and suggests that “Richard’s proposals may have been intended as probes in the hope of finding and widening splits at Saladin’s court, perhaps above all between Saladin and the brother whom he admired, respected and trusted — yet who inevitably posed a threat to the peaceful succession of his own sons.” (Richard I, Yale University Press, 1999, p. 185).

The French historian Jean Flori sites Imad ad-Din as blaming “Christian leaders — in his opinion too ‘intolerant’ — to ‘deliver her body to a Muslim.’” Imad ad-Din suggests that Richard offered a niece in place of his sister, after claiming “the Christian people disapprove of me giving my sister in marriage without consulting the pope, the head and leader of Christianity.” Imad ad-Din says Richard even claimed he had sent a message to the pope requesting “permission.”

While it seems unlikely Imad ad-Din fabricated the whole thing, it still raises the question: Was Richard serious and why would he make this astonishing offer?

Gillingham thinks “there is nothing implausible” about Richard suggesting his sister marry a Muslim as such marriages “had occasionally, in eleventh century Spain for example, occurred.” With all due respect to Gillingham, what had occasionally happened in the previous century in a kingdom Richard hardly knew is not the same thing as Eleanor of Aquitaine’s son giving away his allegedly beloved sister. She was furthermore a widow, and widows could not legally be coerced into marriage against their will, and she was a Dowager Queen. She was not a handy piece of flesh to sell on the market. Yes, marriages at this time were made for political and dynastic reasons not for love, and later Joanna would prove an extremely valuable instrument for pulling the Count of Toulouse out of Philip of France’s camp and into Richard’s. That’s not the same thing as suggesting she join the harem of Muslim leader.

The proposal to re-establish the Kingdom of Jerusalem within the territories of the earlier Kingdom lost to Saladin after Hattin posed other serious challenges for Richard as well. First and foremost, the deal required Richard delivering to all the territories in the former kingdom held by the Christians to his sister as her dowery, but Richard was in no position to do so. Aside from the fact that he did not control Tyre (Conrad de Montferrat did), he was faced with almost continuous rebellion on the part of the French crusaders led by the Duke of Burgundy, and last but not least, no peace would be viable without the consent of the local barons and the militant orders. Less than forty years later, when another Western king made a deal with the Saracens without taking into account the concerns of those who would be left to live it, he was furiously criticized and pelted with rubbish and refuge as he made his way to depart on his waiting ships. Friedrich II’s deal with the Sultan al-Kamil was far less onerous or insulting that the deal allegedly proposed by Richard the Lionheart. It restored Jerusalem and Bethlehem entirely to Christian rule — it simply didn’t provide for their fortification, making it a fragile and indefensible, indeed, sham victory. It is quite hard for me to image that the Templars and Hospitaller, much less the lords of Outremer, would have accepted a settlement that placed the entire Holy Land under Salah ad-Din’s control, as the terms were that al-Adil would hold the kingdom as fief of his brother the Sultan.

Likewise, the idea that Richard would make a deal with Saladin that would be greeted with outrage by the local barons and the militant orders is not in keeping with Richard’s record on the Third Crusade. From the very start, Richard relied heavily on the militant orders not only militarily but for advice as well. He also listened to the advice of the barons of Outremer and it was on their advice that he twice broke off the attempt to regain Jerusalem. Richard, unlike Friedrich II, was not so arrogant that he thought he knew better than everyone else.

Nor was Richard a fool, as his later, highly successful and sophisticated diplomatic maneuvering against Philip of France was to prove. Yet, the proposal as outlined by the Arab chronicles would have been very foolish indeed. In exchange for placing his sister in al-Adil’s haram, he was to give up all the territory he had reconquered and then sail away with his entire army and leave the entire Holy Land in the “benevolent” hands of the Saracen Sultan. To be sure, the terms of the treaty were that Christians would be able to visit all the holy places, but only as unarmed pilgrims. So, as soon as all the crusaders had sailed away, what was to stop al-Adil from repudiating Joanna Plantagenet (all he needed to do was repeat the divorce formula three times), sending her in disgrace to beg in the streets or prostitute herself (since she had no male relatives to defend her honor or protect her) and then closing the pilgrim routes, making slaves of the Christians already in country and then trashing the churches?

For Richard Plantagenet to have made this proposal of marriage between his “beloved” sister Joanna and the brother of Saladin, he would have had to be: 1) completely ignorant of Sharia law, 2) completely disinterested in the opinion of those who would have to live with the consequences of his plan (his sister, his allies, the military orders, the lords of Outremer, and 3) stupid. I don’t think Richard was any of the above.

Which doesn’t mean the proposal was not made. Turning to the far more reliable of the Arab chronicles, Baha ad-Din we find the answer: that this proposal so obviously beneficial to the Saracens was proposed not by Richard but by al-Adil. Baha ad-Din states very explicitly: “On 22 ramadan/20 October al Malik al-Adil sent for me…and showed us proposals that had been sent to the King of England by his [al-Adil’s] messenger. He said that his plan was that he himself should marry the King’s sister, whom Richard had brought with him from Sicily where she had been the wife of the late King.” (Italics added.) Baha ad-Din could not have been more explicit. This plan did not originate with Richard.

As a proposal from ad-Adil it makes perfect sense. He carved out a large and very profitable fiefdom under his brother, ended the war that was wearing everyone down and absorbing resources, and got rid of the troublesome and far too successful crusaders — all for the price of adding one more woman to his harem that he could repudiate at any time without cause just by telling her he divorced her! At which point, as I noted above, there would be no one left to take her in or defend her honor. Could there be a better deal? Why shouldn’t he propose it and see if the Christian king was stupid enough to accept?

Baha ad-Din also provides the very telling information that when al-Adil sought his brother’s approval for the plan, Saladin approved “knowing quite well that the King of England would never agree to [the terms] and they were only a trick and a practical joke on his [Saladin’s] part.” Al-Adil might have dreamed of being king of a powerful kingdom that had for a hundred years maintained its independence; his brother had no intention whatsoever of giving his brother lands that valuable or self-sufficient. Saladin appears to have had a higher opinion of Richard’s intelligence than al-Adil.

And Saladin was right. Richard made excuses (like needing the pope’s approval, which is nonsense) or claiming “the Christian people” were against the proposal (impossible since he didn’t tell “the people” about it). Allegedly he even jestingly suggested al-Adil become Christian, to which al-Adil suggested Joanna become Muslim. It was, by then, clearly nothing but a joke between them. It remains to this day, however, a colorful incident perfect for novels.

The incident is incorporated into my novel “Envoy of Jerusalem” covering the Third Crusade and Balian d’Ibelin’s prominent role  in the negotiations with Saladin.