Having seized control of Jaffa on August 1 with a small landing force of 55 knights and 2,000 crossbowmen, Richard I was faced with the difficult task of holding onto the city until the main army of Jerusalem could arrive.  The garrison had numbered roughly 3,000 men, but many had died or been wounded in the three day siege. More important, the walls had been undermined and breached, making the city itself indefensible.  Furthermore, the slaughter and plundering carried out during the brief Saracen occupation had left the Franks without wine and short of other supplies as well; the entire pig population had been slaughtered and very likely the cattle, sheep and goats (animals valuable to the Saracens) had been driven off as part of the loot. Least pleasant of all, there were hundreds of rotting corpses in the city that would soon cause the spread of disease.

Richard needed to re-establish the defensibility of the city as rapidly as possible because despite his initial success, Saladin’s army was still very much intact; it simply needed to regroup.  The Franks at once set about “repairing” the breach in the wall, but without mortar this could only be considered an improvised and unsatisfactory measure.  At the same time, the Christian dead were collected and given a Christian burial, while the Saracen dead were dumped in a mass grave with the pig carcasses.  Despite these efforts, the city was evidently uninhabitable because Richard chose to erect his tent outside the city walls.

Meanwhile, Saladin had pulled his forces back only a few miles and was rapidly regrouping. As the surprise of the unexpected amphibious assault wore off, and it became clear that they had been routed by what was little more than a handful of knights with supporting infantry, shame started to set in.  The Saracen scouts reported back that that King Richard was camped outside of Jaffa with just a few men. The plan was soon conceived to launch a counter-attack against the Franks, and on the night of August 4 the Sultan led his troops back toward Jaffa.

Just as dawn was breaking on the morning of August 5, a “certain Genoese” went out into the countryside (presumably following the call of nature) and was surprised to hear “the noise of travelers and the clattering of horses walking.”[1] Rushing back to the Frankish camp, he gave the alarm. The enemy was so near, however, that no one had time to properly arm or even dress. “As a result the king himself and a great many others in confusion and urgency of the moment advanced barelegged to battle, some even without underpants.”[2] They took their shields and lances, however, and established a shield wall with the knights down on one knee holding the shield upright in on their left arm and the lance with the butt embedded in the soil to their right, thrust forward toward the enemy.  Pairs of crossbowmen took up positions between the knights and fired in relays.

The Arab chronicler Baha al-Din was a scholaho in 1188 was appointed a judge in the Sultan’s army after a personal meeting with Salah ad-Din. He had apparently come to Saladin’s attention because of a treatise he’d written entitled The Virtues of the Jihad.  Baha al-Din was personally present at the capture of Jaffa and during Richard I’s successful assault on August 1. Although absent from this engagement on August 5, he was privy to the first-hand accounts of many who were present and he describes the opening of the engagement as follows:

[The Sultan and his troops] crossed the open country and came by the morning upon the enemy’s tents. He found them to be few, about ten in number. The Sultan was filled with eager anticipation and his men charged them as one man, but the enemy stood firm and did not move from their positions. Like dogs of war they snarled, willing to fight to the death. Our troops were frightened of them, dumbfounded by their steadfastness…. [T]he number of their cavalry was estimated at the most at seventeen and at the least as nine and their foot were less than 1,000. Some said 300 and others more than that.[3]

According to the Itinerarium, the Turkish mounted archers made multiple attacks, but the horses refused to impale themselves on the lances and turned and fled at the last moment. Meanwhile, the crossbows took a heavy toll of man and horse. Because of the large numbers of enemy, however, the attacks kept coming relentlessly and the air was filled with whirling dust.

Eventually, someone scrounged together about a dozen horses. These were not warhorses, not the knight’s destriers trained for battle, but the dregs left behind when the Saracens looted Jaffa, taking the best horseflesh with them. Nevertheless, King Richard took the best of them, the Earl of Leicester another and others of his knights the rest. Numbering at most 17 (as Baha al-Din attests) they charged into the vastly greater number of Saracen.

The Itinerarium records that the Earl of Leicester was thrown from his horse—but King Richard brought him a Turkish horse and protected him while he remounted. Shortly afterwards another of Richard’s knights was unhorsed and the Turks started to drag him off a prisoner—but King Richard rode to his rescue. The little band of Frankish knights was killing and holding their own, but were lost from view to the men on the shield wall by the mass of Saracens surrounding them and the increasing dust.

Fearing the King was lost, some of the crossbowmen and garrison lost their nerve. They broke ranks and rushed down to the galleys still drawn up on the beach below the walls of the city. Perceiving this, some of Saladin’s men apparently broke into the city (this is only mentioned in the Itinerarium and not in Baha al-Din), but Richard and his knights reemerged from the mass of the enemy and first cleared the streets of Jaffa of Saracens and then “rallied” those that had fled toward the shore. (Richard had a reputation of using very crude and violent language to threaten/encourage his troops in the heat of battle.)

The Itinerarium also relates the somewhat fabulous tale that sometime during the day-long struggle, al-Adil sent Richard two noble Arab horses “in recognition of his prowess” and because he “seemed to be short of horses at the time.” The Itinerarium claims Richard accepted the horses and later repaid al-Adil magnificently.  The Lyon Continuation of William of Tyre,[4] on the other hand, relates the incident differently. This chronicle, which appears to have had access to a first-hand account, describes the horse sent to Richard was “restive” and “in great pain in the mouth.”  In this account, Richard “well aware of Saracen malice” returned the horse. Both accounts, however, are probably fictional since according to Baha al-Din, al-Adil was not present at the battle.

What was happening, however, was that the morale of the Saracens was crumbling in the face of the fierce resistance put up by the Franks in general and Richard the Lionheart in particular.  Baha al-Din describes the situation as follows:

The Sultan was greatly annoyed at this and personally went around to the divisions urging them to attack and promising them good rewards if they would. Nobody responded to his appeal apart from his son al-Zahir, for he got ready to charge but the Sultan stopped him. I have heard that al-Janah, al-Mashtub’s brother, said to the Sultan, “Your mamlukes who beat people the day Jaffa fell and took their booty from them, tell them to charge.”[5]

Baha al-Din then reports the even more remarkable turn of events:

It was reported to me that the King of England took his lance that day and galloped from the far right wing to the far left and nobody challenged him. The Sultan was enraged, turned his back on the fighting and went to Yazur in high dungeon.

And that in a nutshell was the difference in leadership style between the Sultan Salah ad-Din and King Richard the Lionheart: the Sultan urging others to risk their lives, and Richard facing an entire army on his own.

The Sultan’s army withdrew, following him to Latrum, and shortly afterwards the main Frankish army arrived to relieve the city.  The Franks retained control of Jaffa, and were in a position to refortify it. More important, however, as the above passages demonstrate, the morale of Saladin’s army had broken. It was this which opened the opportunity for a negotiated settlement at last. Within a month of the Battle of Jaffa a three year truce had been signed.

[1] Itinerarium Peregrinorum et Gesta Regis Ricardi, Book 6, Chapter 21. The Itinerarium is a contemporary chronicle of the Third Crusade, much of it based on eyewitness sources, but heavily biased in favor of King Richard I of England.

[4] The Lyon Continuation of Tyre is a 13th century chronicle that is believed to be most closely based upon a lost chronicle written by a certain Ernoul, who was a squire in the service of Balian d’Ibelin. As it was pieced together from a variety of sources, however, it is not solely a transcription of the lost Chronicle of Ernoul. Nevertheless, in some sections it appears to have access to an eye-witness who was a native of Outremer rather than a crusader. 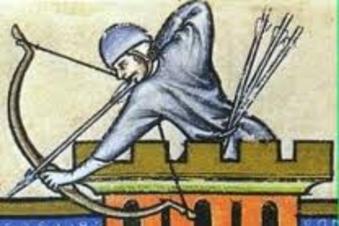 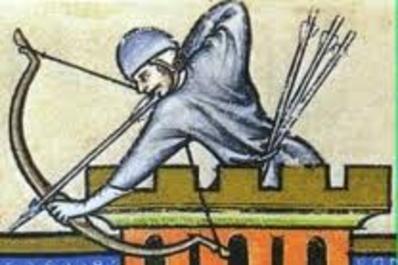 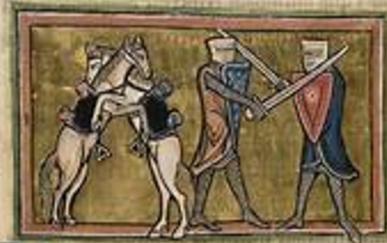 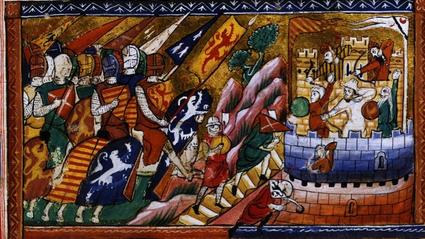 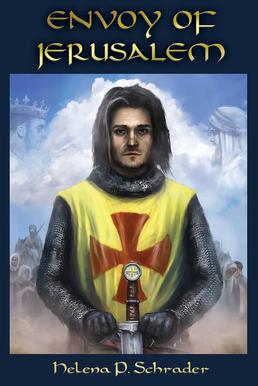 The Battle of Jaffa is an important episode in “Envoy of Jerusalem.”  Buy now!